Ready to set the world on fire? Guide to Lina

Your Semi-Carry Lina and You

Your Support Lina and you

Ready to set the world on fire? Guide to Lina

Introduction: This Girl is on Fire!

The sibling rivalries between

Lina the Slayer, and her younger sister Rylai, the

Crystal Maiden, were the stuff of legend in the temperate region where they spent their quarrelsome childhoods together.

Lina always had the advantage, however, for while

Crystal Maiden was guileless and naive,

Lina's fiery ardor was tempered by cleverness and conniving. The exasperated parents of these incompatible offspring went through half a dozen homesteads, losing one to fire, the next to ice, before they realized life would be simpler if the children were separated. As the oldest,

Lina was sent far south to live with a patient aunt in the blazing Desert of Misrule, a climate that proved more than comfortable for the fiery Slayer. Her arrival made quite an impression on the somnolent locals, and more than one would-be suitor scorched his fingers or went away with singed eyebrows, his advances spurned.

Lina is proud and confident, and nothing can dampen her flame.

Welcome! This is LinaOnFire and today I'm going to publish my first guide, after a bit of delay. So, I decided, why not do this on my core hero? And guess what, it's Lina. Let's get started.

Lina is an intelligence hero, known for ferocious early to mid game ganking.

Lina is normally played in two styles, semi-carry or support hero. In this guide, I would be covering the semi-carry

Lina, as so you can have some fun with your kills.

Lina has great abilities, especially her q, which would cause massive damage to multiple enemies. Finally,

Lina covers up with a great ult that allows great ganking potential, and with the 7th highest intelligence growth and a stunning 5th highest base intelligence,

Lina is a force to behold. 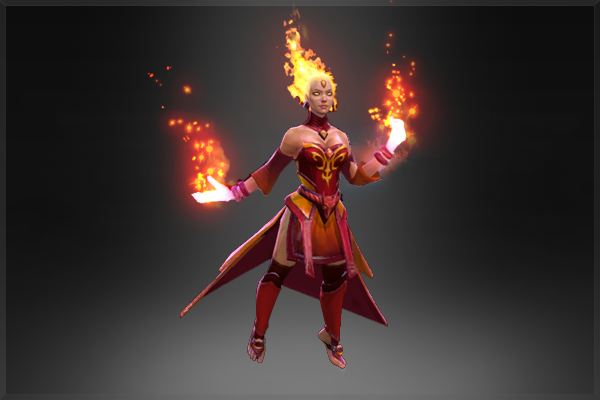 Skills: Fire in the hole!

"Fire makes a fine servant, but a harsh mistress."

Dragon Slave, is an amazing ganking ability with amazing potential in early and mid game.

Lore of the skill:
Lina channels the breath of a dragon, sending out a wave of fire that scorches every enemy in its path.

This ability is amazing when combined with

Eul's Scepter of Divinity and

Light Strike Array combo. Also deadly aginst any low health pool target, as it could easily tear through them. Any hero with low health, such as

Crystal Maiden. The disadvantage of this attack is that magic damage does not scale into midgame, and this does not pierce spell immunity. This would have trouble taking down high health pool carries and buyers of the

Black King Bar, such as

Timbersaw. More about the

Light Strike Array, is a massive AOE damage that causes a long distance stung. When coupled with eul's scepter of divinaty, it is a force to behold.

Lore of the skill:
Summons a column of flames that damages and stuns enemies.

We use this ability to annoy enemies while farming in the mid lane at the early game stages. This AOE allows stunning, which can really annoy level ones, while still keeping relatively low mana cost. This attack can be used to steal bounty runes at the beginning of the game. The combo with this attack is that you first cyclone someone with

Eul's Scepter of Divinity, and when they fall follow with

Light Strike Array, then continue with

Dragon Slave. This would take out many heroes mid-stage, such as

Lich. It can also be used to stop cast animations that are long like

Lore of the skill:
Grants bonus attack and movement speed each time Lina casts a spell. Stacks with itself. Lasts 10 seconds.

This ability is again used to gank opponents efficiently. After you hit them with the

Light Strike Array combo, they would be weak and you would have 3 stacks of

Huskar. This ability stack well with the job

Lina is up to, so it is very important. It is also a great counter for

Laguna Blade, is a devastating single target attack that is great is used for ganking.

Lore of the skill:
Fires off a bolt of lightning at a single enemy unit, dealing massive damage.

This ability scales well into late game, as when aghanim scepter is purchased, the damage type changes to pure. This can help you take down frequent

Black King Bar buyers, such as

Axe. This attack also has an low cooldown for a ult, and is just as good as

Finger of Death, because of lower cooldown and mana usage. This ability is used in 1 on 1 situations, and can help stack

Fiery Soul. Extremely powerful, it is recommended to use it on a carry like


The pros of Lina

Lina is a strong midgame ganker with powerful solo abilities. Her power lies in the long stung of

Light Strike Array and the powerful burst of damage done with

Laguna Blade. Her powerful ganking ability is in that she can also follow up with her

Fiery Soul, even after the ganking fails to increase mobility, and if necessary, attack speed.

Enchantress is a low health hero, perfect for the

Lina could pull off. The massive range of

Enchantress's back line position. Finally, her

Untouchable is countered by

Crystal Maiden is a low health hero, making her great for the

Freezing Field, can be directly cancelled by

Light Strike Array. She can also not move during her ult, granting larger chance to land

Lina in order to trade because of the long range of

The cons of Lina

Lina has low health, and that could cause trouble late game. When people like

Heart of Tarrasque, then

Light Strike Array would do next to 0 damage. If she gets ganked, she has a small chance of escaping because she doesn't have great escape tactics, unlike

Shukuchi. She also lacks in late-game.

Sven. What can I say about him? It was like he was created just to counter

Lina. With his burst damage with

Storm Hammer and god's cry, he can quickly burst down with long stungs and high damage. He always buys

Lina must get the aghamim's scepter in order to counter

Black King Bar. But, by that time, sven would have gotten a [[heart of tarrasque, therefore making the aghamim's scepter a waste of money.

Anti-Mage is made to counter any spell dependent hero. With a perfectly landed

Mana Void, he can quickly wipe

Lina out if she uses her

Blink can quickly get him out of

Dragon Slave's range, and spell sheild makes him extremely tolerant of magic damage. If the

Lina is at mercy of

Mana Break and his high mobility with

Items: Throw another hero on the fire!

Tango would outlast it.)

Tango: Increases lanning time and help you stay on lane for a longer time, thus letting you farm more.

Boots of Speed: Increases mobility, and allows for an early

Clarity: Is good for sticky low mana situation that could happen because of high mana dependence early game.

Magic Stick: Helps you in low mana and low health situations, and can gain charges easily if an opponent is an ability dependent hero, like

Wind Lace: Offers movement speed, as well as it builds into a

Staff of Wizardry:Offers hard to miss intelligence, granting more spell damage and mana regen. As a bonus, it also builds into a

Void Stone: Grant bonus mana regen, as well as builds into a

Bracer: Helps damage and keeping you alive, as well as builds into an

Magic Wand: is a natural and cheap upgrade from

Blink Dagger: Allows quick blick in gank then blink out combo. Quite expensive, though.

Light Strike Array combo. Life doesn't get much better that this.

Bottle: This is essential to keep runes for later, more importently double damage runes. It can also be used to carry fountain water by couriors, and is relitivly cheep.

Laguna Blade's damage to pure. Great for cutting through

Drum of Endurance: Gives attack speed bonus, cheap, and builds up from

Scythe of Vyse: Allow for ganking potential and support later on.

Shiva's Guard: Extra defence. why not?

ton of stuff you could also bring

Guardian Greaves: During late game, arcana boots are kind of useless. you have a couple of chosies.

Boots of Travel and upgraded boots of travel: It allows you to be at every fight, as well as saving inventory space from

Force Staff: This helps you escape if opponent has

Ghost Scepter: This helps escaping from heavy auto attackers like

Ethereal Blade: This allows you to push more magic damage on a single enemy.

Mekansm: Allows for additional health regen for teammates, and builds into

Pipe of Insight: Helps your team from other strong magic damagers like

Aegis of the Immortal: Works with every hero.

Orchid Malevolence: More damage to the target. Why not?

Divine Rapier: +330 damage. This is the stuff of legends!

Aether Lens: This help with early game mana regen and can get you out of tough situations.

Urn of Shadows: Normally for support [[lina], but good for keeping you alive.

Desolator: Always good to keep around for some extra right-click damage.

Sentry Ward: Doesn't hurt to know where enemies are. Great for when the enemies have people that could go invisible (such as

Cloak and Dagger or

Shadow Walk) or people that could put invisible things (such as

Smoke of Deceit: Great for ganking others early game before

Force Staff could be afforded. Also good at escaping.

Dust of Appearance: Some enemy used a

Smoke of Deceit to run away. Use this to track them down.

Flying Courier: Help you get items in the middle of a fight.

Lina is an extremely easy to use, spell dependent support of semi-carry that is highly dependent on eul's scepter or divinaty and

Light Strike Array. With the right combinations, she is a force to behold. Thx for viewing this guide on

Lina, and this is my first guide, so any thumbs up or +1 would be very well appreciated.

Also thx to Jaden and Antony for their support.