You hate those nukes? Go buy this

If you play against Illusions

Welcome to my guide to

Slark is a very mobile, Hard to kill carry. He's one of my favorite hero cause of his Dark Pact which makes him very hard to deal with. It's a great hero to snowball. I'd suggest you to not pick this hero if you are new to DoTA ,

Slark is not that easy hero to play, you'll need to manage everything correctly from the start(Early game) to shine in Late game or you'll just feed yourself and get 4 Reports from your mates.

Little known to the inhabitants of the dry world, Dark Reef is a sunken prison where the worst of the sea-breed are sent for crimes against their fellows. It is a razor barbed warren full of murderous slithereen, treacherous Deep Ones, and sociopathic meranths. In this dim labyrinth, patrolled by eels and guarded by enormous anemones, only the vicious survive. Pitched into Dark Reef for crimes unknown, Slark spent half a lifetime without kin or kindness, trusting no one, surviving through a combination of stealth and ruthlessness, keeping his thoughts and his plans to himself. When the infamous Dark Reef Dozen plotted their ill-fated breakout, they kept their plans a perfect secret, murdering anyone who could have put the pieces together--but somehow Slark discovered their scheme and made a place for himself in it. Ten of the Dozen died in the escape attempt, and two were captured, hauled back to Dark Reef, then executed for the entertainment of their fellow inmates. But Slark, the unsung thirteenth, used the commotion as cover and slipped away, never to be caught. Now a furtive resident of the carnivorous mangrove scrub that grips the southern reach of Shadeshore, Slark remains the only successful escapee from Dark Reef. 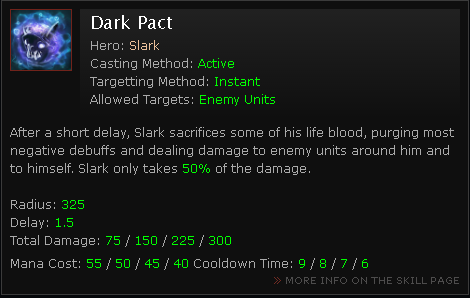 Dark Pact is very useful for farming, purging some debuffs. It has a great damage for nuking, and the most important is low cooldown&mana cost. if you use this skill effectively, you'll be hard to kill. (BE CAREFUL , YOU'LL TAKE A HALF DAMAGE FROM THIS SKILL THOUGH) 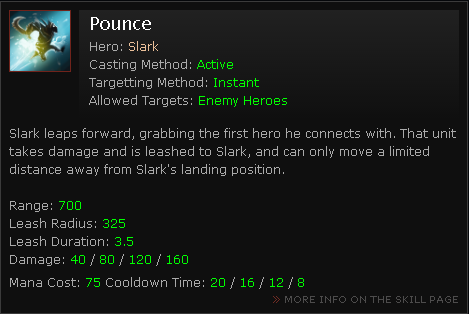 Pounce is your main escape & chase ability, you can jump through a terrain like a cliff, chase down the enemy and detect some illusions too. (REMEMBER SINCE THE LAST PATCH, POUNCE DOESN'T DISJOINT PROJECTILE ANYMORE) 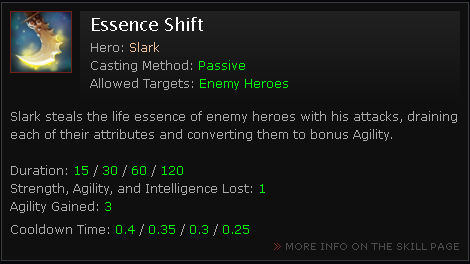 One of the best passive ability for AGI carries. With this Ability, you can steal enemies' stats and take it as a damage and armor. 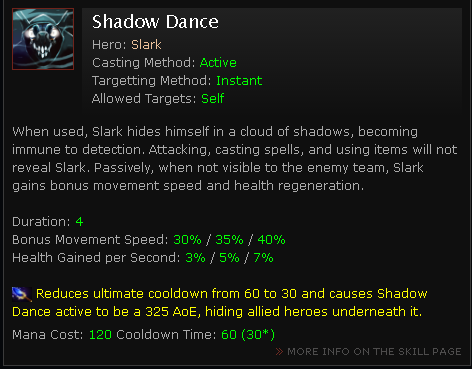 This is why slark is really annoying. The regen bonus is just Great, add some pretty good movement speed, Invisible to enemies, detections even true sight, What do you expect? lol
Top

Spoiler: Click to view
If you watch the video and look carefuly, you'll see that i managed to tread-switch to INT before i use

How To Chase With

Dark Pact -> Blink towards the enemy -> Use

Pounce -> Tread-switch to STR and hit the enemy. REMEMBER : Try to time

Dark Pact Correctly or you'll have your

Pounce and Darkpact for escape

Spoiler: Click to view
This trick is really useful, especially for those who have Projectile-type stun such as 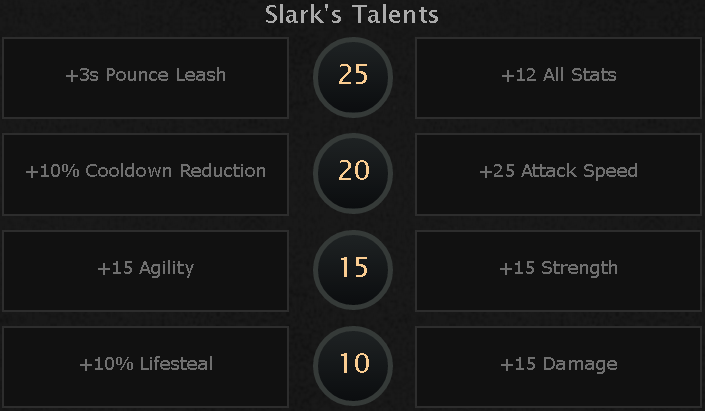 Level 10 Talent : +15 Damage / +10% Lifesteal
At the early stage of game, you'll need damage boost, with 10% Lifesteal you still can't withstand the damage taken from Dark Pact, and it won't be really useful since you have

Level 15 Talent : +15 Agility / +15 Strength
It's actually more like situational, when you keep going well then i think +15 Agility is good, since it gives you +15 Damage and +2 Armor, but if you had a bad mid game, lack of HP , nukes everywhere ill suggest you to pick that +15 Strength boost

Shadow Dance, but still for another skill i wouldn't recommend it. +25 AS is just good for you , since it's a late game and you need to steal more enemies' stats ftw.

You may want to rush

Poor Man's Shield since it gives nice damage and armor, and some pretty good Block chance to counter some harasses from your enemies.

IRON BRANCH Branches are excelent stats boost for early game, it's cheap and you can use it as a happy little tree for your tangoes, or you can Upgrade it to

TANGO This little thing will heal you from the harasses, Dark Pact farm, etc.

HEALING SALVE This boi will heal you from critical damage taken.
Top

Like i said before, it's just good for Harasses , Damage & Armor

HAND OF MIDAS It's good for EXP and GOLD boost for you, the attack speed bonus is nice too, it'll help you so much :)

RING OF AQUILA Why should you buy this item? The mana regen from this item is pretty good since you'll spam your

for farming. (Turn Off your Aquila if you don't want to push your lane!)

QUELLING BLADE It'll help you to farm. A lot.

POWER TREADS The best shoes that you can buy , You can tread-switch before

Dark Pact. The stats and Attack speed just fit with your hero.

ORB OF VENOM Buy this if you want to chase enemy easily, and later upgrade it to

Good item for start a gank, not only that, this little boy will help you to escape as well. Attack speed is good, upgradeable to

It's still great chasing & escape item eventhough it gives NO stats for you.
(Don't buy this, if you fight someone that has Long DPS like

Viper and anybody who has

ULTIMATE ORB The stats are nice, upgrade this later to

POINT BOOSTER The stats are nice, upgrade this later to

Buy this thing, if you need more Durability and fight against some Escapers such as

MONKEY KING BAR MKB will be perfect if you have fast attack speed. Buy this if you need RAW damage and more chance to proc a bash.

BLACK KING BAR BKB is a must if you play against Nukers. It'll help you a lot, but if you fight against someone like

MJOLLNIR Mjollnir is optional if you need some faster attack speed, faster farming potential, BEST ITEM FOR SLARK to counter Illusions like

It's just great items for you if you have a lot of gold and you don't know what do you want to buy. Just buy

Moon Shard to consume it. (Never buy Moon Shard if you won't consume it, it'll just waste your slot and it doesn't give any stats except attack speed.)

REFRESHER ORB You'll only buy this item if the game goes really well for you, and if you need 2

DIFFUSAL BLADE This is really situational, If you face someone like

Wraith King , It's really good combined with your

Essence Shift (For Mana burn + Stats Steal). But it's not that really MUST have item since the stats are pretty much Agility which makes your HP pool low.

LINKEN'S SPHERE The stats from

Ultimate Orb is great, Mana regen bonus is quite good for farming, Buy this if you struggled with

Sange and Yasha The Maim and Movement speed from both

Yasha are great, but you won't buy this item if you only want Stats from it (I'd prefer

Eye of Skadi than

Sange and Yasha), Buy this item if you need more Movement speed and want something different from your build.

Bloodthorn You'll need this if you face someone like

Mirana,and Another escaper. But, please never rush this item, cause it's really expensive and Not great item for your mobility (Lack of stats given)
Top

You may want to play safely until you get your

Shadow Dance. Don't forget the Creeps Aggro and Ask your support to Pull the creeps, if you got a bad lane (ex: Fight against

Magic Wand and play safely, Try to not die->Go farm to Jungle,

Iron Talon will help you a lot.) After you get your

Shadow Dance, This is when you can easily farm. Choose your 1st core item(

In this stage, you may want to Push and FARM or Gank and Farm. THIS IS IMPORTANT: Please ,
After your team Wiped enemy out, Please PUSH and WIN the GAME or Go For ROSHAN. If you have nice early & mid game, it's almost guaranteed that you'll win the game.

Slark is Good Against :

Slark is Bad Against :

Slark is one of the most annoying Agility hero that has
High Damage Output. He's late-game viable carry, due to his high armor (Thanks to

Dark Pact), and that enormous HP regen from

Slark is vulnerable to some Nukes, Mana Burns and Non-Stop Disables like Perma-Bash, Mute-Ability such as

Static Storm (With Aghanim's Sceptre). *Sigh* I think that's all lol, Thanks for reading.

Steal the attributes of your enemies
By Dota 1 Builds on February 23, 2022