The Hunt is On - A Roamer/Offlaner Guide to Bounty Hunter [6.87 UPDATED]

Get Whatever Your Team Needs

The Hunt is On - A Roamer/Offlaner Guide to Bounty Hunter [6.87 UPDATED]

Hello everyone! My name is christhaifood, and I am here to share my knowledge and playstyle of

Bounty Hunter to you all.

Bounty Hunter is one of my favorite heroes to play, and is a ton of fun once you get the hang of it.

Bounty Hunter, a phenomenon that has surged in popularity in pubs in the aftermath of TI5. In this guide, I will provide my insight into this playstyle, as well as the usual pubstomp build most Bounty Hunter players use.

This is my very first guide on dotafire.com, and I hope you guys enjoy it!

UPDATE: I know it's been a really long time since I first wrote this guide in 6.84 or 6.85 or something, but college is hard man.... Anyway, 6.87 is a major patch and I feel that I finally have some side time to update this guide for the patch. Let me know what you think!

When the hunted tell tales of Gondar the Bounty Hunter, none are sure of which are true. In whispered tones they say he was abandoned as a kit, learning his skill in tracking as a matter of simple survival. Others hear he was an orphan of war, taken in by the great Soruq the Hunter to learn the master’s skill with a blade as they plumbed the dark forests for big game. Still others believe he was a lowly street urchin raised among a guild of cutpurses and thieves, trained in the arts of stealth and misdirection. Around campfires in the wild countryside his quarry speaks the rumors of Gondar’s work, growing ever more fearful: they say it was he who tracked down the tyrant King Goff years after the mad regent went into hiding, delivering his head and scepter as proof. That it was he who infiltrated the rebel camps at Highseat, finally bringing the legendary thief White Cape to be judged for his crimes. And that it was he who ended the career of Soruq the Hunter, condemned as a criminal for killing the Prince’s prized hellkite. The tales of Gondar’s incredible skill stretch on, with each daring feat more unbelievable than the last, each target more elusive. For the right price, the hunted know, anyone can be found. For the right price, even the mightiest may find fear in the shadows.

Bounty Hunter is a melee agility hero that is very, very flexible hero that can be played pretty much anywhere and whatever role.

Bounty Hunter normally takes the roles of either the solo offlaner or roaming support. His skillset allows him to be a very intimidating presence early and mid game, as he can roam and gank very, very effectively. He can easily sneak up on heroes with

Shadow Walk, slow them with

Orb of Venom, and interrupt

However, his signature bread-and-butter skill,

Track is what makes

Bounty Hunter such a useful asset to his team. It provides true vision of his target, extra movespeed, and most importantly, extra GOLD. This is what allows teams to snowball into a huge gold advantage, putting the enemy at a massive disadvantage.

After all that, you should be in good shape. All you need to do is keep roaming to other lanes and try to gank. ALWAYS be missing. Instill fear into your enemies (or at least make them waste money buying sentries). If there's an enemy jungler, BE DISRUPTIVE. Sap the jungler's experience, block camps, and kill them if they're low on HP. And if you're ever near any of your jungle camps/ancient camp, do the carry a favor and stack. This will give your carry extra GOLD, and give you experience you missed out on roaming if you sap that experience. Doing all of this successfully should help you ease into the mid-game smoothly.


Things to Keep in Mind

Playstyle
Since you're going in the solo offlane, hopefully one of your supports has given you either an

Sentry Ward to block their pull camp. Your job in the offlane is to survive and get to level 6 fast. To achieve this, do the following: 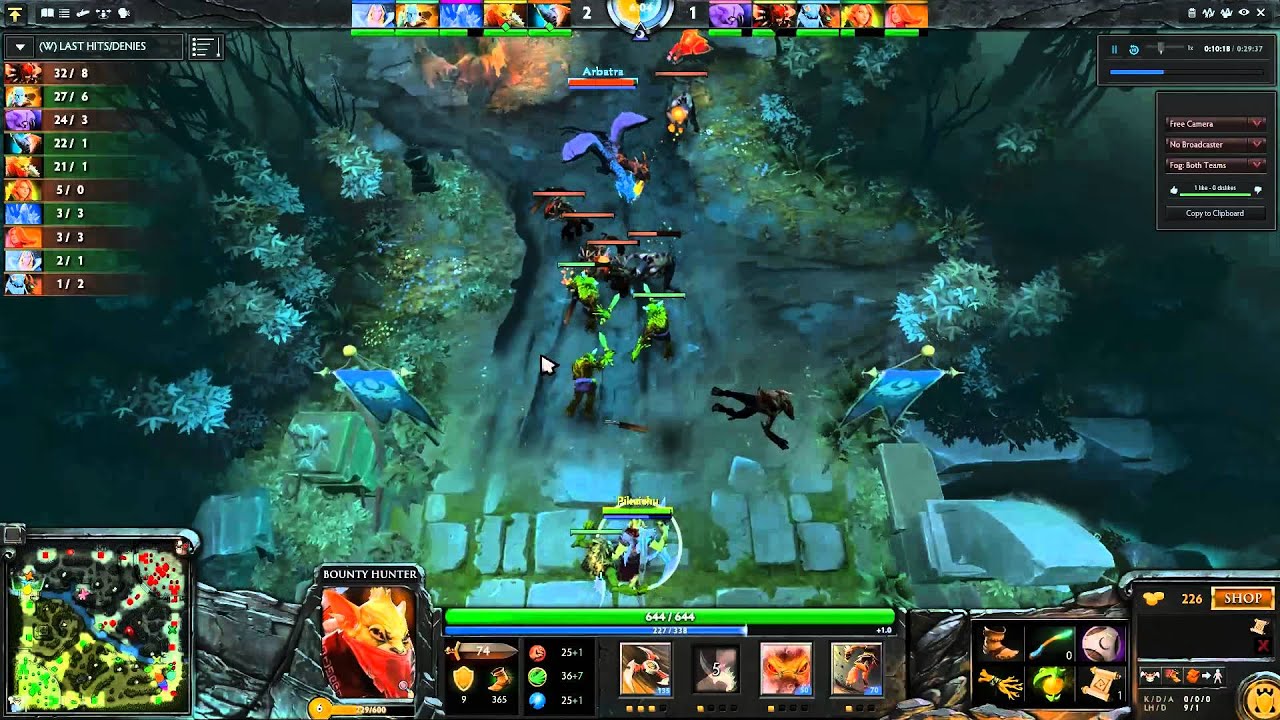 Bounty Hunter, you have the means to gank and countergank. Either sap some more xp in the offlane, or go out and roam for kills.

Things to Keep in Mind
Top

Bounty Hunter really shines. In the many skirmishes that usually occur during this time,

Bounty Hunter's team has a significant advantage due to

Bounty Hunter's ability to scout out threats/potential ganks and provide a gold advantage.

As such, no matter how you laned

Bounty Hunter, his playstyle during the mid-game is the same. Here's how to approach the midgame and help snowball your team to victory.

Bounty Hunter's mid-game is fairly straightforward. Your job is to get aggressive on the enemy team, and be involved in as many fights as possible. You are responsible for initiating ganks and communicating with your team if you want to jump on someone.

During the mid-game as


However, items during the mid-game phase can vary, depending on what build you aimed for early game. You could've gone for a utility

Bounty Hunter or a damage-oriented


Extensions
You are a rich support, gaining lots of gold from

Track kills. That means you can pretty much buy ANYTHING that your team needs. YAY! How cool is that?

Bounty Hunter as a support has a very flexible item build, and generally gets items the team needs. Deciding which items to get though depend on a number of circumstances. Luckily, some items are less situational than others, so let's delve into item choices for

Track kills, use that bonus gold for MORE DAMAGE to annihilate more squishies!

So now you've cruised through the mid-game and... WHAT? You haven't ended the game yet??? No worries; even if

Bounty Hunter's primetime has passed, he'll still be immensely useful in the late game. How? Pretty much in a similar way to his impact on the mid-game.

That's right, you're pretty much playing like you've always been, except with a little more care, since everyone is at this point fully farmed. Keep in mind:

Well there you have it! It's been a long read, but I hope you've enjoyed every bit of it. Hopefully you've learned about what it takes be a great support

Bounty Hunter, and how to snowball the game as a solo offlaner

Bounty Hunter. That's it for now I guess!


Of course, if you really want to learn how to play

Bounty Hunter, watch other people play. It's a great way to learn advanced and secret tactics, and to gain an overall understanding of how exactly to play the hero a certain way. Here are some replays of famous DOTA players playing

That's about it! Hope you guys all enjoyed the guide! Feel free to provide feedback and suggestions in the comments section!