Rattletrap, the Best of the Keen Folk

The gears are in motion!

More tools to play with

Rattletrap, the Best of the Keen Folk 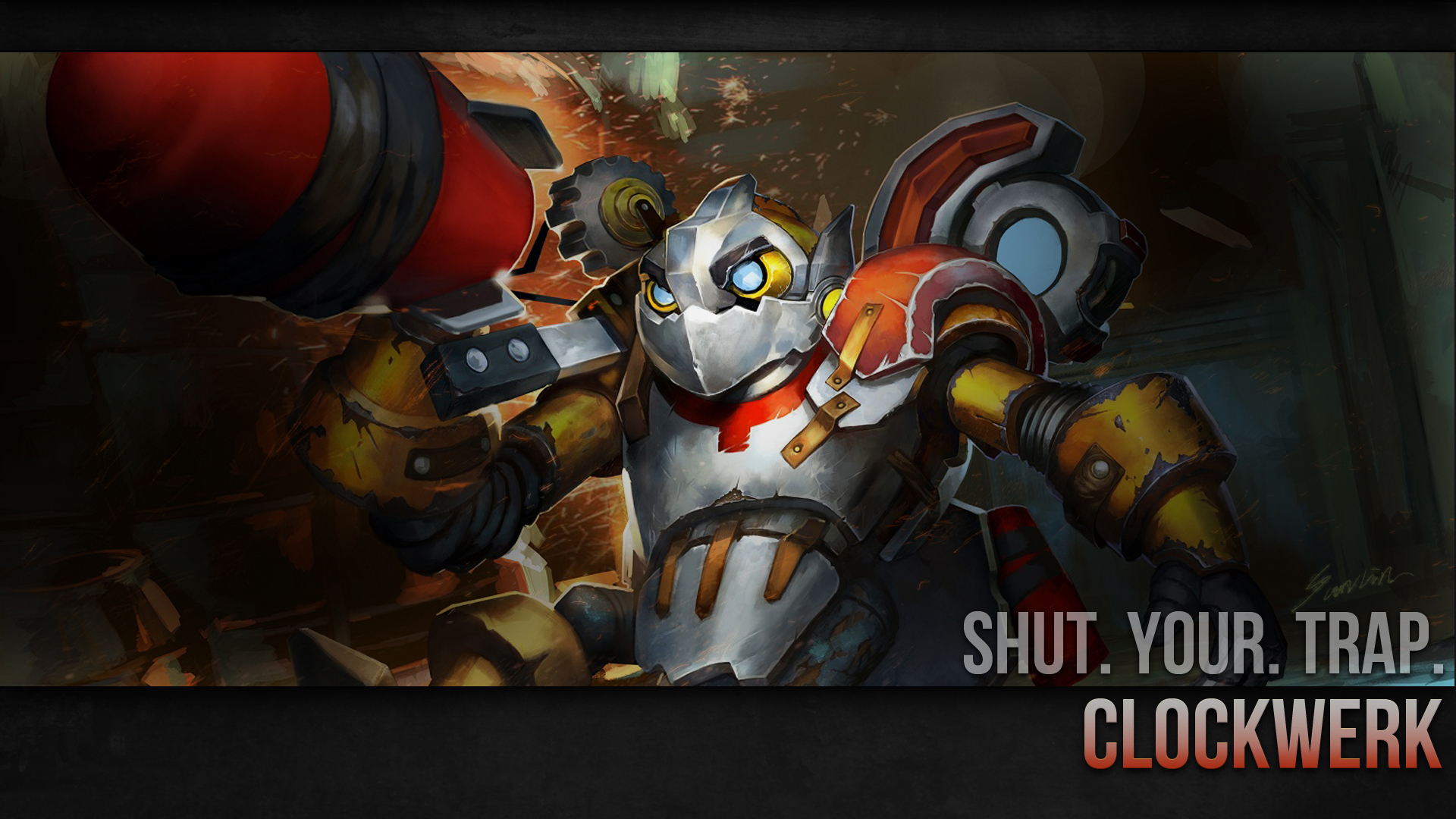 Clockwerk is a very strong initiator/ganker who is also a very versatile laner. While he can farm and use said farm well he does not need much to solo kill heroes early on in the game. His abilities allow him to disrupt enemy movement and lock heroes down during teamfights. He's also a Can of whoopass. This guide will talk primarily about

Clockwerk in the middle lane.

Clockwerk is also a member of the Keen Folk, which includes

Sniper, who are both heroes that

Clockwerk will begin to shoot shrapnel at random enemies around him in a 275 radius. The shrapnel shoot at 0.7 second intervals for a whole 10.5 seconds, for a total of 35 hits. This is what makes

Clockwerk so scary early game. If an enemy hero is hit for the entire duration by all the shrapnel they will take 240/560/880/1200 magical damage. Level one

Power Cogs will last for five seconds, which is more or less half of the entire duration.

Battery Assault is maxed first for this reason; it increases

Clockwerk's damage output by a lot more than

Clockwerk will summon a ring of eight gears around him, trapping any units within a small radius. This allows him to trap enemy heroes in with him and his

Power Cogs take 2/2/2/3 hits from an enemy to break, while it takes

Clockwerk a single hit. The

Clockwerk harder to gank then most other heroes.

Clockwerk can cog and then break a single cog and walk away. They can also be used to trap creeps at your tier 3 tower, effectively giving you a 5 second creep block. This is why it is picked up at level one.

Rocket Flare is a global-ranged nuke that also gives vision for ten seconds. Doing 80/120/160/200 magical damage, it isn't the heaviest nuke, but the vision it provides is invaluable. The flare can be used to scout runes, check tree areas for hidden heroes (like the radiant tier 1 tower in bot lane), look for Roshan, etc. The damage can also be enough to snipe low hp heroes who just got away from you.

Hookshot is what makes

Clockwerk. It's a skillshot similar to

Clockwerk will launch himself at the hero, dealing 100/200/300 magical damage and stunning for 1/1.5/2 seconds. The stun goes through magic immunity (Like

Hookshot can hit multiple heroes within a small radius of the hook (125, 175 with

Hookshot can even be used with allies, hooking an ally does no damage or stun but still brings

Clockwerk to the ally's location. Hooking neutrals/roshan will use the

Hookshot but will not do anything.

Hookshot has a cooldown of 70/55/40 seconds, which allows him to use it liberally for solo kills. This gets even better with an

Clockwerk is a very versatile laner but I believe that he is best in the middle lane. He can get a quick level 6 and then gank other lanes or even kill the enemy midlaner if they aren't careful.

Clockwerk you want to lane passively until around level 4. This is when you have enough damage to possibly solo kill the enemy mid if they're a mid without an escape mechanism like

Tinker. At level 6 push the lane with

Rocket Flare and go get kills. A haste rune or invis can guarantee a good

Hookshot or even just a

A single set of

Clockwerk enough regen to last until his

Clockwerk to trade hits with the enemy laner and to shrug off harassment. It also helps to tank him up a bit when he

Hookshots into multiple heroes, who will then focus him.

Basic stats for last hitting, and also builds into a

Clockwerk much needed mana regen, along with the ability to utilize the runes, which can help

Clockwerk needs boots to keep up with enemy heroes, especially when

Battery Assault is on.

Core Items (The gears are in motion)

Clockwerk the ability to tread-switch, a godsend for low int heroes during the early game.

Bottle; switch to agility and bottle, then switch to strength/int.

Mekansm is an item that is best when gotten early, which

Clockwerk can do through his mid lane farm and ganks. The burst heal is wonderful early game, when 250 is a large fraction of a hero's hp, and the

Clockwerk the tankiness that he wants.

Hookshot he will naturally be focused on by the enemy team. Blademail gives some tankiness (armor) and also allows

Clockwerk to do even more damage.

Aghanim's Scepter reduces the cooldown of

Hookshot to twelve seconds. This is amazing. This allows

Hookshot whenever he wants, and even multiple times in a teamfight. This is definitely the item

Clockwerk wants after his core items. The extra stats and tankiness don't hurt as well.

Clockwerk's nightmare, allowing enemy heroes to force their allies out of his cogs. However it is also a very good item on

Clockwerk as well, since he is a very positioning-based hero. A

Force Staff can save teammates and create even more confusion in a teamfight.

Shiva's Guard is one of the best tank items in the game, giving

Clockwerk tons of armor and an infinite mana pool. Once the game starts to go late the majority of damage becomes physical damage, so lots of armor does wonders for heroes who want to tank damage like

Clockwerk. The passive slow is great against enemy carries and the slow can keep heroes close to

Scythe of Vyce is a great item pick up if your team lacks lock down. The ability to

Hex and enemy carry for 3.5 seconds after

Hookshoting for 2 seconds for a total of 5.5 seconds of lockdown is amazing. Also remember that

Phantom Assassin without having to invest in a

Monkey King Bar. While it is a very expensive item

Clockwerk is a great farmer with his

Clockwerk all the mana and mana regen he could ever want.

Pipe of Insight is a great item that shields allies from magical damage. This is a great pick up against heroes with tons of magic damage even later in the game such as

Heaven's Halberd is a good tank item for

Clockwerk, giving him hp and the 25% evasion. However the real value is in the 3/4 second disarm against melee/ranged heroes. Before

Black King Bars come out, this can completely cripple an enemy carries damage potential, and can continue to do so against carries like

Medusa who do not want to buy a

Black King Bar is a great item for

Clockwerk when the enemy team has a ton of lockdown (like

Skywrath Mage) that can kill you before you get your spells off. However in most cases you want to be the one eating all the nukes and stuns so the rest of your team can come in and clean up.

Boots of Travel or BoTs are the ideal late game boots, allowing

Clockwerk to teleport around the map every 60 seconds. They can be used in conjunction with buyback upon death to return to the fight as soon as possible.

Dust of Appearance should be bought against invis heroes. Don't want heroes like

Bounty Hunter to just fade away while laughing now do we.

Observer Wards can be bought to give vision for your

Hookshots, and are worth the gold if you get a single kill off one.
Top

Clockwerk can offlane decently well, due to his

Rocket Flare. However due to lack of access to both runes

Arcane Boots are bought instead of

Power Treads. In addition, since you do not need to save for a bottle, if there is only one support on your team you should buy either the

Observer Ward. The skillbuild can be tinkered with (heh), but

Rocket Flare should be prioritized in order to last hit in lane.

The item build stays the same. However if your mid or safe lane hero is a hero like

Pugna that wants to pick up a

Mekansm early and can do so earlier than

Clockwerk let them build it. This just allows

Skywrath Mage is a very good combo with

Clockwerk, as shown during the International 4 by Cloud9. The

Rocket Flare also can give vision for

Skywrath Mage to use his

Ice Blast radius will usually be very low in teamfights since he is near the fight. A

Ice Blast to hit. In addition,

Ice Vortex increases the damage from

Lich's ult combined with two or more heroes trapped in [[Power Cogs can do insane amounts of damage, since the

Chain Frost won't have as much travel time between targets. Frost Armor is also nice for tanking up

Kunkka has a guaranteed

Clockwerk survive teamfights where he shouldn't have lived.

Magnus can set up beautiful 3-5 man

Dark Seer's Ion Shell] also allows [[Clockwerk to dish out even more pain inside of the [[Power Cogs.

Clockwerk can really use the extra mana that these two heroes give him.

Keeper of the Light's

Illuminate will also get a full channel during

Force Staff either pulls enemy heroes out of your

Clockwerk. You get the skillshot satisfaction similar to

Pudge but instead you're balling into the enemy team like a real man (goblin).