So, another jungle guide from me. This time is

I would have said the hero is probably better in lane, but considering his farming speed that can make your mid run for his money (and experience), I actually wonder if the hero is actually a jungler instead.

Guaranteed level 10 by 10 minutes by farming creeps only is Great. Very few junglers can boast about it.

Enigma probably can do it easily, but you don't jungle Enigma for 10 minutes. You jungle

Vanguard can do it easily, but that's just asking for reports from your teammates.

Make no mistake, it is still not a good thing. Even if you have fast farm but already losing towers because your solo laner cannot hold it, it makes the point of Jungling a moot.

Troll Warlord benefits bigger from levels far more than items in early mid rather than your standard carry due to his skill sets. This will be covered in Hero's Strength and Weakness section of this guide.

Again, like my Juggernaut guide, this hero is intended for laning and should be done so. The reason you jungle is most likely your allies pick another hard carry.

So you don't want to read the rest of the guide? Don't worry I won't blame ya.

From all the heroes available, in my opinion, the one that counters him the hardest are

Morphling with his escape. Against these heroes,

Bloodthorn is necessary and most likely buy

Diffusal Blade to force pop their

This section is to point out the guide's value.

Ugh, really hate writing this part... so lackluster... I'll copy pasted this some from gamepedia. 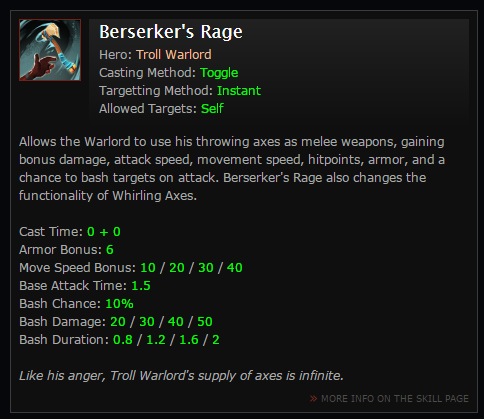 Troll Warlord can switch between melee and ranged after leveling this ability once.

Leveling this up increases the bash duration, damage, and movement speed.

Depending on you play style, this can be maxed second or third. 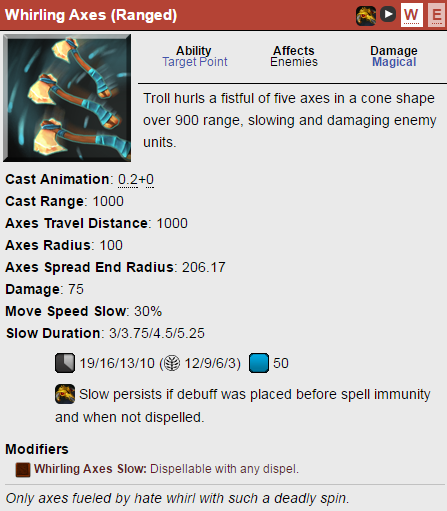 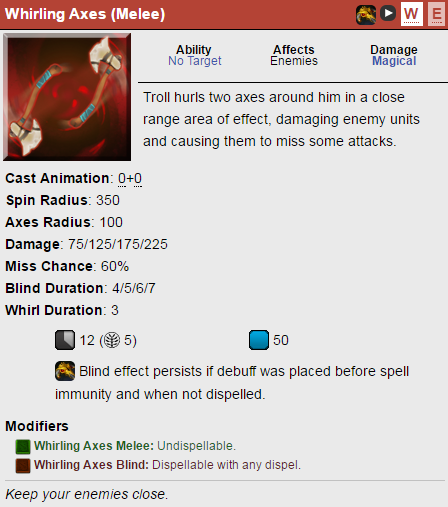 Whirling Axes depends on whether you are in melee form or ranged form.

Depending on you play style, this can be maxed second or third. 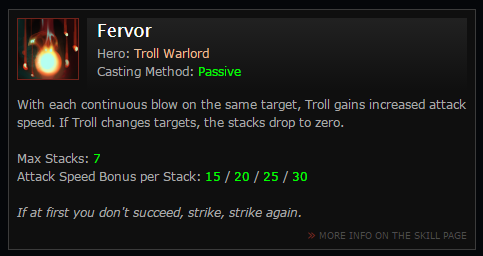 The number one reason we max this first is take on Ancient Creep as early as possible, which will boost your jungle fast. 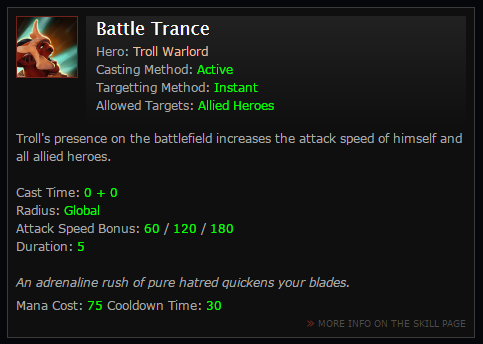 Very self explanatory skill. Make sure to use this when taking ancients down in early game.
Top

This build is intended for Solo Roshan at level 10 or 11. If you are worried being forced to contribute in early game or do not plan on taking Roshan early, go for the second build.

You can still Solo Roshan at level 11, but definitely riskier than Build 1, since Roshan hits you more with your less Bash duration. So save Roshan for later if going this build. 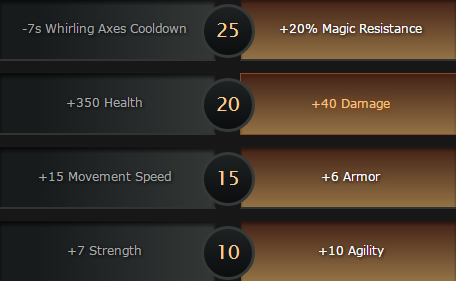 Level 20: +40 Damage scales waaaaayyy better than health does. We will buy items that makes

Troll Warlord tanky anyway, so don't take the +350 Health ever.

Level 25: -7 Whirling Axes Cooldown or +20% Magic Resistance? Both are good. If not facing many magic damage, take the cooldown reduction.
Top

The only items you need until you get

Bounty Rune in 0 minute will supercharges your farming rate, so make sure to grab it.

Depending on your luck at what creeps you found (though it happens rarely, but it does happen), you may have to use the Shrine after you are out of

Healing Salve. Coordinate with mid to use the shrine if you are in such situation.

Use the healing salve if your health is down more than 400 from maximum HP. Or perhaps use it when below half but tanking the creeps as your health potion heals you up.

Morbid Mask is for the lifesteal. For

Troll Warlord, the item is more efficient than

Helm of the Dominator. Make sure to take the ancients as much as possible after getting this. Generally, you should have this at level 5 to 6.

If you have extra gold and health is below half, squeeze an extra

Healing Salve. The safety of having huge health is better than farming below half HP.

Boots of Speed fast and immediately use courier. It will fasten your farm since you can go camp to camp faster.

Phase Boots after this, for damage and faster movement from camp to camp.

Smoke of Deceit at the same time.

Claymore is for the damage to clear Roshan fast.

Smoke of Deceit is to avoid wards when entering Roshan.

Shadow Blade is the fastest shortcut to kill enemies down. Starts being active after getting this. Kill solo enemies, if in fights, clear the squishy ones in the back first. With your farm superiority, getting this item by 13 to 14 minutes is not hard.


Generally, the ones you want to get first is

Silver Edge since it gives nice stats, damage, and passive disabler. But you can leave Silver Edge for later when other needs are mandatory to be dealt first.

Eye of Skadi if you don't want enemies to escape from you, ever. Pretty much a guaranteed kill to whoever your axes touch unless they have Blink skills or

Force Staff. Nice item to tank up as well.

Monkey King Bar for damage and eternal "cannot fight back". Literally no carry can fight you back by right clicking alone.

Bloodthorn should be picked up early if you are planning to buy this, like immediately after getting

Shadow Blade since this item is countered somewhat by

Eul's Scepter of Divinity or

Orchid Malevolence part should be bought first if you want to depend on silence to stop enemies from escaping. Pick this up to crush any hope for heroes other than right clickers to fight back.

Butterfly is an agility carries' friend. Troll Warlord included. Though to be honest, this item is almost always the last item I consider to power up Troll.

Satanic is a natural upgrade to your

Morbid Mask. Buy this to be super tanky when combined with

Eye of Skadi. If enemies try to counter you with

Blade Mail, pick this up fast.

Blink Dagger is the anti-kiting for

Troll Warlord. Jump on them, Ult, and right click them to death. If they want to escape using

Silver Edge to catch up.

Black King Bar to stop damage nukes and stuns from interrupting you. If your allies cannot crowd control the enemies long enough for you to damage them to oblivion, pick this up. This is probably the most often picked situational item.

Assault Cuirass when facing a stack of minus armor heroes.

Mjollnir is a mediocre attempt to kill enemy with lots of illusion.

Invoker or any invisible heroes and

Glimmer Cape carriers. Since your item slot often leave one open in mid game, you should bring this item if need be.

Diffusal Blade is the anti-Ghost item. If a

Ghost Scepter carriers stop you from killing him and lets him cast spells before dying, pick this up.

Daedalus is the inferior form of

Bloodthorn but the DPS is higher in lategame. Pick this up against heroes that stacks health and armor. Like when facing 3k+ health with 30 Armor.
Top

Ah... welcome to the heart of the guide. The jungle section.

By the way before continuing, be aware of the Rule of Thumb:

FARM THE CREEPS IN MELEE FORM. FROM START TO FINISH 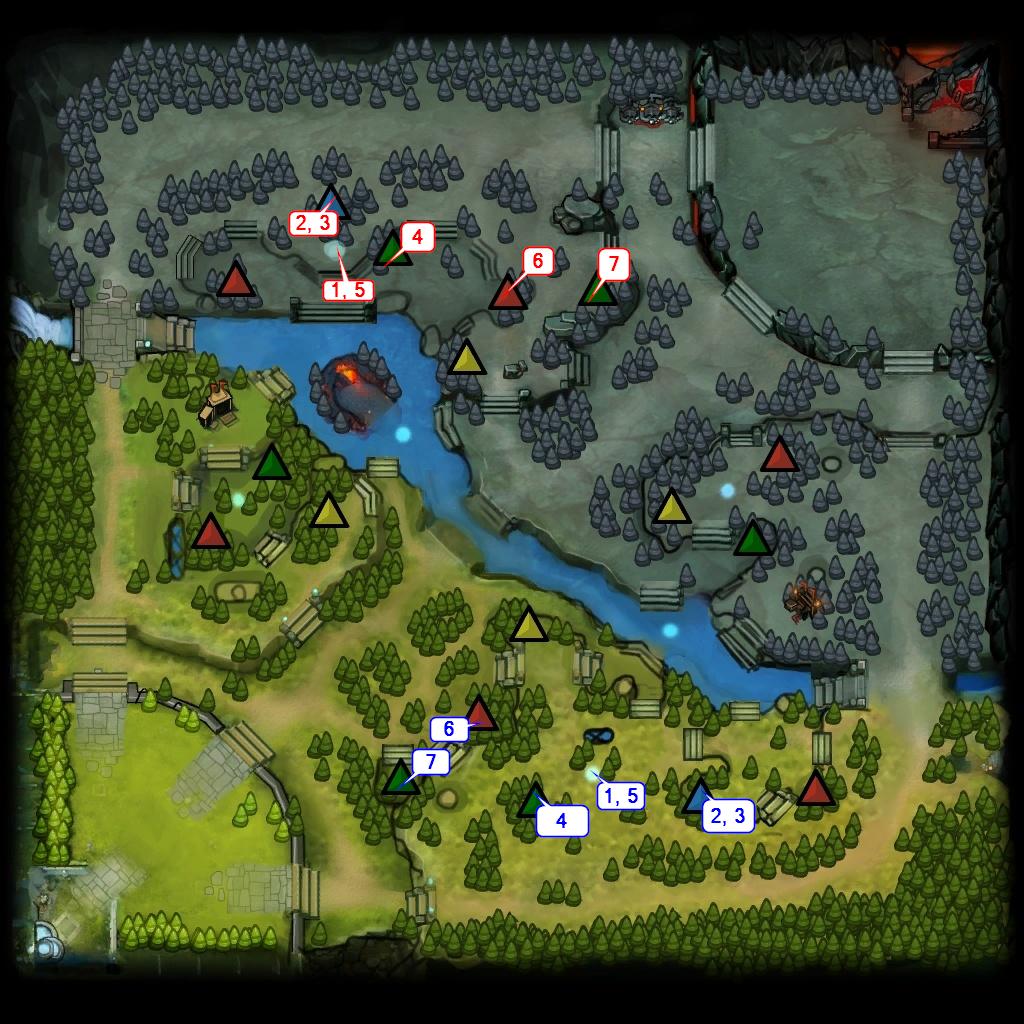