Greed is Good - A guide to Alchemist

Greed is Good - A guide to Alchemist 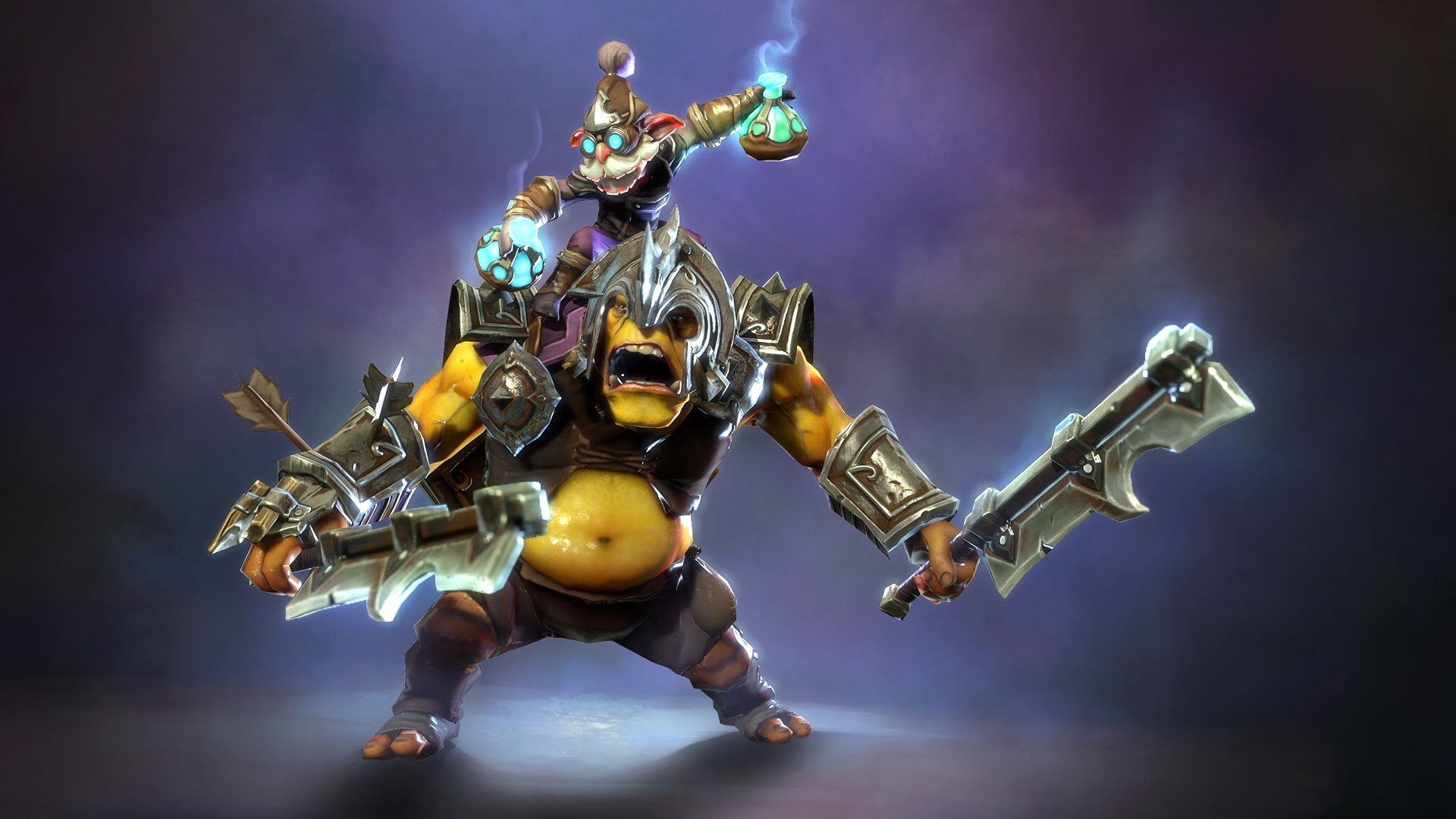 Hello everyone and welcome to my guide to

Greevil's Greed. He is one of my favorite carries in the game and he used to be really good during TI3 which was the reason why a lot of teams picked him during the drafting.

He isn't being picked a lot in Tournaments again because he was nerfed after TI3.

Chemical Rage at Level 3 makes him nearly as fast as

- Gets weaker late game due to Hard-Carries
-

Acid Spray is a skill You can use to defend Your own towers and farm creeps on the lane faster, farm the jungle, pressure the enemy tower and even deal more damage in team fights. The armor reduction of this skill is more useful in team fights than the damage however.

Alchemist's main stun during the whole game. This skill can be used to chase, gank, escape and even initiate a team fight. This is going to be Your best shot (no puns intended) of getting kills in the early game to get more experience and gold. Be careful how You use it, because if Your opponents silence, disable or stun You,

Unstable Concoction can backfire if the time runs out and You can end up blowing up Your own ***, giving a free kill to the enemy team. You can also use this skill to deny Yourself.

Greevil's Greed is what makes

Alchemist one of the fastest farmers in the game. This is going to be Your best way of earning gold during the whole game. We focus on leveling this skill first so we can farm in the early game faster and get our Core Items faster.

Chemical Rage is one of the best skills a carry can get. It increases Your Health Regeneration, Mana Regeneration, Movement Speed and Attack Speed! Its also got a fairly low cooldown so don't hesitate to abuse it when You are low on Mana or Health as You will gain back more than You had before using the skill. It lasts 25 seconds and the cooldown is 45 seconds, meaning its real cooldown is 20 seconds since it is active for 25 seconds unless You die.

So why not go for

Acid Spray first instead of

Because You want to be farming early in the game as fast as possible.

Alchemist is supposed to farm early in the game using

Greevil's Greed and get his Core Items as fast as possible. After that we level

Unstable Concoction to increase our stun duration and damage. We use this skill whenever we plan on getting a kill. After maxing out this skill, we level the last skill remaining,

Acid Spray. We use this skill to push the lanes, defend our towers and attack enemy towers, and to farm the jungle.

Greevil's Greed taken at level 1 then?

Greevil's Greed at level 1 You will have to focus on last hitting every creep on Your lane to get as much gold as possible, and Your only way of killing an enemy would be attacking him. You can go for level 1

Unstable Concoction at level 1 for the stun and damage. Just try not to mess up or it can cost You and Your allies a lot.

Acid Spray isn't really useful early game because it costs a lot of Mana and doesn't always end up getting the last hit on a creep so it isn't reliable a lot on farming until You skill it to level 3 or level 4. The Armor Reduction is however really good in team fights.

Chemical Rage is taken whenever possible because without this skill

Alchemist isn't as strong as how he should be, and taking this skill eliminates the need of buying too much Regeneration Items, while it also increases his Attack Speed and Movement Speed.

These are the Items You should buy when You start if You are going to be supported by someone that can heal You.

Quelling Blade is taken for easier last hitting. You should request two

Tango (Shared) from the support that's going to be laning with You. Spend the remaining gold on 2

Iron Branches. You are now 6 slotted so You can't get the last

Iron Branch due to the

Tango (Shared), but that isn't a problem.

Tango (Shared) or You don't have any supports on the team. The

Healing Salve are You main way of healing since You have no one to support You on the lane. The

Quelling Blade is taken to help You with last hitting, while the three

Iron Branches are taken to improve Your stats in the beginning and will be turned into a Magic Wand later in the game.

It doesn't matter which build You used, these should be Your Early-Game Items. The

Iron Branches are turned into a Magic Wand. The

Ring of Protection is turned into a

Ring of Basilius for better Mana Regeneration. You make a

Hand of Midas for better farming and to gain more experience. You can go for

Power Treads on Alchemist but I prefer

Phase Boots as they allow You to chase an enemy and also escape from an enemy, while the damage combined with Your

Chemical Rage is also great. The Quelling Blade is still here from the starting Items to make farming a little more faster.

Your Core might seem a little too costly but You have

Greevil's Greed and a

Hand of Midas. To get Your Core Items fast, simply don't die Early-Game, try to get a kill together with an ally against a squishy enemy hero on Your lane, farm the jungle and farm Your lane. The Core is easy to get if You don't mess up Early-Game, because

Greevil's Greed will be helping You a lot. Also, if You have a good Mid-Lane hero that can gank, request a gank from him when he reaches level 6. Getting 2 kills in the early game will be really helpful and can decide if You win the lane or not.

Mjollnir is a must on Carry

Alchemist and so is

Skull Basher is really good because of Your

Phase Boots are used for escaping and chasing.

By now You should have farmed a lot of gold and also should be finishing Your Core Items.

Maelstrom is not going to be upgraded immediately, instead we will make an

Assault Cuirass and then go for

Skull Basher, which together with Your

Chemical Rage is going to deal a lot of damage and have a long stun . You should also keep using that

Hand of Midas to get more experience and gold.

These are the Items You should have during the end of the game if You don't need any of the situational Items. The

Skull Basher is upgraded into an

Abyssal Blade. Since You have good Attack Speed and Damage by now, a

Daedalus is taken to increase Your damage even more and make Your attacks have a chance to be critical, while a

Satanic is taken for the survivability and Lifesteal it grants when

During the Early-Game You should be last hitting creeps and farming, while trying not to die. Stay with Your laning partner if he is a support and try to gank with him if he has a good nuke or stun, all You have to do is harass the enemy a little, then use Your stuns and start attacking him to get a kill. Choose the more squishy enemy, not the harder one. When Your Mid-Hero gets to level 6, request a gank from him to Your lane.

By now, You should have a

Hand of Midas to increase Your gold and experience gain and You should start farming the lanes and the jungle for more gold. You can try to push some towers with Your allies but try to get some gold for Your Core Items. After You do so, pressure all the lanes that You can and don't let the enemy Carry farm creeps because if they have a Hard-Carry, then You can get outcarried Late-Game

You should be getting full slotted at this time, and should be well farmed to be effective. If You work together with Your allies correctly then You should be able to start pushing the 3rd Towers and take Barracks.
Top

Best allies and friends of

Alchemist as a carry needs allies that can heal him, meaning that heroes like

Warlock are his best allies.
A special mention goes to

Keeper of the Light. He can keep restoring Your Mana, so that You can throw Your

Unstable Concoction and stun the enemy while he channels his

Illuminate which mostly ends up as a kill.
Another special mention goes to

Tethers You and then uses

Overcharge You will have extremely high Attack Speed, bashing everything in front of You while dealing a lot of damage with

Mjollnir and regaining a lot of Health with

Alchemist are also heroes that can stun or disable an enemy, such as

Shadow Shaman.If You combine the stuns or disables from any of these heroes with

Unstable Concoction in the Early-Game then You can get a First Blood and usually You will be dominating Your lane. The last special mention here goes to

Techies. This might seem a little unusual but if you land your

Unstable Concoction then all

Techies has to do it go on the Stunned Enemy Hero and use suicide squad, attack!. His

Mjollnir and its Passive activates at least 3 times.

Biggest enemies and foes of

Spectre or heroes that have long lasting disables, silences or stuns such as

Silencer or Doom bringer . They can silence, stun or disable

Alchemist and he can end up stunning and damaging himself with

Lifestealer is the biggest enemy of

Feast and because of that

Alchemist is a fairly tanky hero and has a lot of HP.
Top

Thanks for reading this guide, please rate and tell me what You think I should change. If You have a question ask it in the comments. This is my first guide here so I hope You liked it.

Alchemist himself isn't the best carry, but still he is a pretty good carry. He used to be one of the best carries before the nerf because

Chemical Rage gave him HP.
It took me like one day to make this guide and to publish it, considering I created the name only and saved it to see how it looked, but then did not know how to edit the guide. Then after some days I came back to this site and when I was looking at this saved and not published guide I noticed the option Edit, so I continued developing it.

The Perfect Alchemist
By on March 25, 2020
Featured Heroes