Bounty Hunter - The Off Laner.

Bounty Hunter - The Off Laner.

Introduction To This Guide.

Bounty Hunter in a SOLO lane. I would also like to stress this guide is made for a competitive level of play using

Bounty Hunter one of the strongest off laners in the game?


Because of these many reason's,

Bounty Hunter is consistently drafted at both a pub and competitive level.
Top 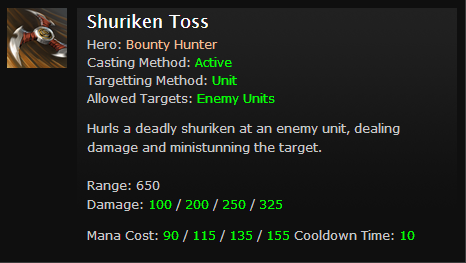 The reason why this is maxed at first glanced is due to it giving you some great early game burst which is very needed. Due to the mana intensity of using the spell it is more used to stop channeling and to guarantee kills. Using it to harass is quite an expensive thing to do but it is still very viable as harassment provided you keep an eye on your mana. Too often I see

Bounty Hunter's not leveling this up and only due to the fact that it is hard to sustain, but i stress that it is essential this skill is maxed ASAP. 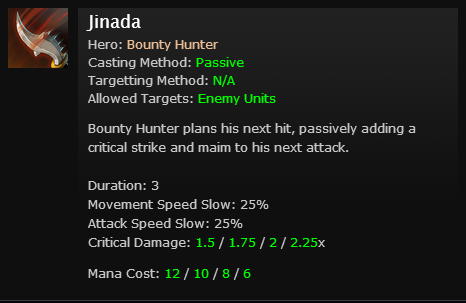 The reason only skill point is put into thsis ability early game is because it gives you early game options. With one skill point, if you are having trouble staying in your lane, you can do some shadow walk + jinada harassment which may hurt your mana but will also force out consumables from the opponent. It allows you out last-hit your opponent every time it is off cooldown and the 4 second slow does not change at all from one skill point to four. Maxing it second gives you extra damage output needed to make you more effective. 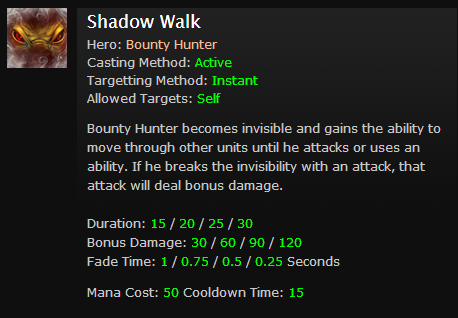 Too often, I see players opting for

Shadow Walk at level one. What happens if the enemy tri-lane is looking to first blood your sorry *** and you got a skill that will not help you survive the level one gank? Get it level one, just like windrunner's windrun. It's a priceless skill and you need it from the start. Getting a second level of

Shadow Walk allowd you to sustain permanent invisibility. IE: you are still invisible once it comes off cooldown. It assists you in the jinada + shadow walk harass. This is maxed last due to 2 levels in

Shadow Walk being more than sufficient enough to sustain the escape mechanism. 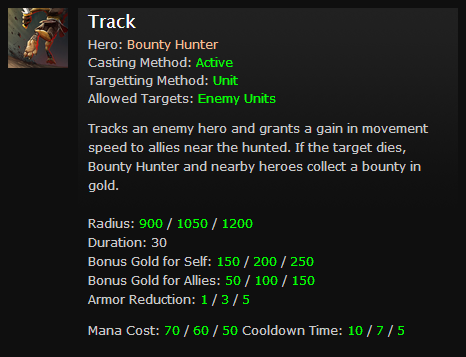 Bounty Hunter is considered to be a strong pick. Going even in a teamfight, means you win it. It's ridiculously good and helps you along with your allies farm up. You want to be spamming this right before teamfights start out making necessary decisions on whethet you need the extra mana in your pool or not. The speed is given to your allies too making it even stronger to chase with. Do not ever pass this up. There are so many advantage to this ability that simply can't be passed up.
Top

Considering you are going solo on the off-lane, your top priority is to sustain yourself enough to stay in your lane as long as possible. A

Stout Shield helps you tank up a lot of harass and even when you get harassed down, you still have the option to pop your consumables.

Healing Salve and a

Tango is appropriate regeneration to sustain some harass for a while. If you feel, you are being pressured too much in your lane, you can opt to go into

Shadow Walk, wait until it is off cooldown then

Jinada your opponent while immediately

Shadow Walking again for some repeated harass. Keep in mind, your mana pool cannot sustain this and you need to know when to do it or when it shouldn't be done.

Iron Branches gives great all round stats which are very necessary. Having a set of

Observer Wards pulled to you by a support or even opting out for wards instead of a stout shield is fine if you feel your enemies skill level will most definitely be pulling consistently or up against a tri-lane. You can use one to block the pull spot and the other to put on your rune spot.

As you can see, there are so many options to choose from in the early game and i tried to make it suit as much situations as possible. Generally,

Quelling Blade is generally player preference as you already have

Jinada to last hit effectively. If you need mana regen, Getting a

Ring of Basilius into a magic ward will gives you great stats and mana regen. If the opposing lane has sentry wards, chances are you are going to have to deal with the all of a sudden harder lane or purchase sentries to counter them.

Drum of Endurance and a

Shadow Fiend. However, if you were to pick up a

Bottle, then generally, other early game items such as magic wand, ring of basilius would be slighly redundant and would not need to be purchased.

As a ganker, you'll typicall want

Phase Boots for the extra chase potential and the damage that equates to 54 on jinada. It's synergizes well with

Power Treads serve it's own purpose with the help of being more tanking and tread switching which helps to get more out of your mana pool. The reason why tranquil boots is an option is when you are building

Vladmir's Offering. As the parts from

Vladmir's Offering can be used to make tranquils. These are useful in helping you in your lane against heavy harass.

Generally, if you're looking to hit the hardest,

Monkey King Bar is the best option. However if you go this route, you will be missing out on some much needed hp / mana regeneration. That's why it's typically a good option to go

Vladmir's Offering as a core moving into

Bounty Hunter in various ways. First off, the lifesteal allow susstainability of health and mana without returning to base making him a much more effective ganker. Secondly, the armour bonus makes and his team more physically tankier with extra armour, not to mention the extra bonus damage that scales into the late game. It's a very cheap item and although it delays your damage items a bit, it's a safe route to go.

Medallion of Courage should be picked up when your team already has alot of armour reduction or the opposing team has alot of armour. These items are more for team ganking which allows enemies to be taken down easier provided there are more people around to take advantage of the armour debuffs.

Drum of Endurance delays your big damage items but still gives you a lot of damage itself. The aura is quite strong and keeps you tanky against burst damage lineups.

Vanguard is mainly not considered as a good item for bounty but if you're looking for the best of both worlds (tanking up and safe regeneration), then

Vanguard is a good line in between.

Black King Bar lastly is an item you will need to get throughout the game at one point and i'd argue is the best defensive item in the game. If you're up against a

Naga Siren, you best be farming this up fast. If the other team has various abilities going through

Black King Bar then maybe it is not worth it.

Abyssal Blade is not a standard luxury but does have it's advantages. Giving you some tank ability along with a load of damage, The active ability should be used every chance you get for obvious reasons. It's a reliable two second stun, do it.

Bounty Hunter but is viable.

Black King Bar is almost always a core for any carry. Considering how fast you need it is dependant on your enemies lineup.

Butterfly is a very strong item that is both offensive and defensive. This is generally built against heavy right clickers that DON'T have

Monkey King Bar. If you're going to get it, make sure you're purchasing the

Manta Style is a common

Heart of Tarrasque is preferred if you aren't going for a

Black King Bar on the other team.

Mjollnir is not the best item on

Bounty Hunter but is viable.

Divine Rapier is the troll of all trolls item that is a last resort or a bit of fun. Purchasing this gives you an extra 675 damage upon a jinada proc and is the only reason why

Bounty Hunter is applicable for this item. If you're buying this item, you could be just holding onto to teamfights but just arent getting there, and your team is slowly losing. A

Divine Rapier could help snipe that support that needs to be sniped. But please be aware, this item is obviously very risky.
Top

What You Need To Know:

Although, I give the hard carry build option, I do not recommend it for the main point that

Bounty Hunter simply gets out-carried late game and thus is the reason why he is played as a ganker / roamer / utility hero. If push comes to shove and late game is where your team composition peaks, then a

Battle Fury is what is needed. Keep in mind that going this build makes your mid game strengths significantly weak but your late game strength significantly stronger. If your team lacks a hard carry and already has enough gank and roam potential, then

Battle Fury can be considered viable. If you already have a flash farmer such as an

Anti-Mage. DO NOT GET IT.


Take this match for example.

This is an example of when not to get a

Battle Fury, when a

Battle Fury core that could farm the jungle very fast.

Sange and Yasha which is known to be a very weak item for its worth. Because of this, he gained very little damage to synergize with

Jinada and failed to do enough damage the entire game. Going for the ganker / roamer build, you have a lot more damage output and mid game strength which is hard for teams to deal with.

BOUNTY HUNTER 7.30 BY DUCAN - RESUMEN
By on May 21, 2022
Featured Heroes
Primal Beast
The Ageless Hunter