There's one reason why I'm using

Troll Warlord in 7.00, the existence of

Crazy farm speed with said item. Existence of Shrine makes him continuously active raking gold from jungles. And goodness of all, he destroy towers like there's no tomorrow. He can even solo backdoor towers now, provided he is sufficiently farmed.

It's an easy thing to offend a troll. A prickly and contentious race, trolls thrive on argument and strife, missing no excuse to raise their voices in dispute. Males grow to maturity in subterranean chambers beneath their matriarch's domicile, feeding and amusing themselves while contributing nothing. Often they stay for years beyond the age of maturity, while the matriarch provides them with sustenance. When young trolls are finally pushed from their sub-chamber, they gather with others of their kind, forming roving gangs of malcontents who complain loudly about all manner of vexation.


As much as trolls love to argue, imagine how rare it is for a troll to be driven from his own kind for being too difficult to get along with. Such was Jah'rakal's fate, a monger troll from deep in the Hoven. So deluded was he, so bitter and abrasive, that even other trolls found his company intolerable. After one particularly vitriolic outburst in which he claimed the lion's share of loot from their latest raid, his cohorts finally snapped. They turned on him, beat him with clubs, and drove him from the encampment. Enraged at his banishment, he returned the next day, armed with steel, and slew them all, one by one. He then swore a blood oath: he would ever after be a fighting force unto himself. Now he roams the world as the Troll Warlord, bitter and angry, the Imperial high commander of an army of one.

Strength and Weakness (of this guide)

Hover over the Icons for skill descriptions.

This is your Q. The ability that makes

Troll Warlord very unique. He can be melee and ranged hero at will unlike

Dragon Knight that needs his ult to be ranged or

Terrorblade where he needs

Metamorphosis, even then you cannot change to melee until your spell duration ends.

The bonuses (bashes, armor, and movement speed) only applies when the

This ability has a built in Bash attack, so unfortunately you cannot have

Abyssal Blade passive effect, but fret not, this bash stacks with

Monkey King Bar. Because of your monstrous attack speed from

Mask of Madness also with the bash duration, basically a single bash will almost lead to a perma-bash and thus killing them. When combined with

Monkey King Bar's very high mini-bash chance, your enemy cannot do a thing unless their stun ability has 0 cast time. (The only one that has this is

Dragon Tail If I remember correctly).

NOTE: Bash has a hidden cooldown, so getting Perma-Bash means you are very lucky.

Most of your damage come from the combination of

Fervor and the bash from this, so we max this second. Also because of these bonuses, despite able being a ranged hero, his melee form is more powerful and thus preferred in many situations. Only use Ranged form when trying to take dangerous towers or enemies trying to escape from you.

Quelling Blade without receiving much damage return. If your lane is bad (you get bullied hard), consider going to jungle instead.

Leveling this skill increases your Movement Speed, Bash duration, and Bash Damage, but the armor bonus stays the same. For that armor bonus alone (and melee form), we can put this skill in mere value point if you wish so.

Granted when putting this skill in value point means he needs a set up from his allies like a stun or disable so he can catch up, but in upside, you get some nice damage nuke from your Whirling Axes and Attack Speed from

Sange and Yasha helps to offset your lack of positioning for not leveling this in early or mid game.

Do note that the Bash damage from this skill is magical damage. This means that the damage won't pierce

Note: This ability has interesting interaction with various things. Please visit this link to know what these effects are. Do note that I don't forward to Dotafire because Troll's

Berserker's Rage ability notes has not been updated yet since... ever.

These abilities switches with each other depends on whether your

Berserker's Rage is passive (ranged) or active (melee). When passive he uses the Ranged Whirling Axes and vice versa.

Things you have to note:
The orange-colored texts are the reason we can put this skill in value point. But leveling this skill gives the power to nuke down enemies easily with reliable 300 magical damage before reductions. if your team lacks damage from nukes, leveling this might be a good idea.

Pretty self-explanatory skill. Your primary damage. Good for farming jungle and pushes towers down. The low starting attack speed is covered by both

Mask of Madness, so we max this first.

Another self-explanatory skill. This skill gives impact mostly to

Berserker's Rage since they benefit from your bonus attack speed.

Use this to kill opponents, destroy towers, or generally use it when in team fights even when you are far away so your team has bonus attack speed. Use this also to kill ancient creeps quickly, but don't overuse it. You have little mana pool, and doesn't want to have empty mana when team fights happen.

Aghanim's Scepter on your team, prepare to demolish your opponents towers in seconds.

Max this whenever it's available.

Make sure to use this ability first before using

Mask of Madness, or else it would be awkward. (I'm serious about this though) 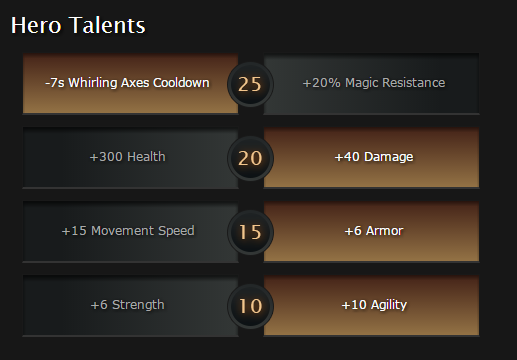 
Level 10 Talent is no brainer. Agility scales better to late game, and your health will be covered with items.


Level 15 Talent also gives nothing to mull about. With superior movement speed bonus from

Mask of Madness, picking +15 movement speed is bad. +6 Armor, however, is very good. It will offset minus armor from MoM's active.


Level 20 is where you have to choose wisely. +40 Damage is Great, but at some situations, they can be bad (E.G. facing

Blade Mail). Pick +300 health when getting tanky is far more detrimental. Like facing


Level 25 is just... well... meh. -7 Whirling Axes cooldown seems cool on paper, but when you get level 25, you are already doing so much damage from your right clicks that you will forget to even use the ability until the enemy is escaping. 20% Magic Resistance is just as bad. You already have

Black King Bar as one of your item choices, and the item already blocks majority of the nukes. Pick Magic resistance when facing heroes like

Hover over icons for item name and description.

Getting this item has 2 ways, directly or indirectly.

Belt of Strength, Recipe (Yasha), Recipe (Sange), in any order. Then proceed to disassemble Dragon Lance to get

Sange and Yasha. The extra

Band of Elvenskin can be sold.

So What does this mean?

Getting directly, means you get

Yasha first, which an item good for farming, pushing, but bad for fighting since your health is low.

Dragon Lance first means superior stats for fighting, but less farming speed. And you have to pay 200 gold more than usual to get SnY, but the superior stats on the way are very good for that kind of price.

Generally, if I get a good lane, my team is good at keeping enemies at bay in early-mid game, I generally go directly for

Sange and Yasha, but if you are forced to go online quickly, opt for

You can exchange this item with

Silver Edge if you need to get stealthy to deal with their backline heroes first. However don't get both SnY and SE, too redundant.

With the changes to 7.00, games tends to be quicker.

Farming is far faster now with the runes and the far more neutrals, so getting SnY is also far faster.

In early game, stick to the lane until level 6. If your mana is lower than half and your allies ping for Shrine, unless he or she is on the other side of the map, go join him. You will need all the mana Troll has.

Don't be shy to use shrines. Since you need mana (and health) to push, going for a quick heal to push faster before enemies react is great. But don't waste shrines, use it wisely.

The rest of the game is situational, so good luck!

All heroes with reliable stuns are your best friends. Some however, deserves special mention, having stun or not.

Magnus is your MMR Farm booster. Ask him for some points in

Empower in early levels and watch your farm skyrockets. He is literally a portable

Battle Fury giver, which is something you want, but will never buy because it will delay you in significant margin and doesn't do much in team fights.

Slithereen Crush) and amplify damage? what more can you ask for?

Same as Slardar, but with more utility. Stun from

Magic Missile for you to catch up, Armor Reduction and Damage enhancer from

Wave of Terror and

Vengeance Aura means you can kill them easily. Her

Nether Swap to save you when you are over extended or to catch fleeing enemies.

Your tower destroying friend when he has

Battle Trance when he is plowing buildings.
Top

Troll Warlord included, but we can pacify this with

Troll Warlord has surprisingly few weakness when going this build, but it doesn't mean he doesn't have one. Since you go online early where most other carries likely go farming, he can press advantages before getting mowed down by the enemies.

Since you are a single hero killer, illusion heroes are naturally your enemies.

Whirling Axes (Melee) can easily distinguish which one is real.

Brewmaster is a core and anti-carry that comes online quick because he is not a priority farmer. This guy most likely already online before you get

Black King Bar, making him a very dangerous guy. And never forget his ult, since he can escape using it. Depend on your allies to root him down with stuns and nukes until you get these items.

ROOT will be your new enemy with the buff to said mechanic. Root has been buffed and no doubt will be popular. Root abilities also generally has low cooldown since its status is considered inferior to stuns. Heroes that can cast them in early game is the most dangerous ones for you.