and welcome to my

Storm Spirit guide. Here I'm going to explain a bit how I play Storm. I recommend you to at least read the items & gameplay section before giving up your vote. Sadly, some people will not even read this small Introduction.

It's good to take

Healing Salve for good hp regeneration on the lane. Few stats helps you to take last hits on creeps. Later on you make them into a

Magic Wand and to a

Why not to use all gold for start?

The answer is fairly simple. The extra 150 gold you save for the

Bottle. Rune control gives you a fairly good advantage over the enemy mid. Also runes help you a lot in ganks.

Also in public games it is important to have an

Animal Courier which costs 150 gold. Usually it is your supports job to buy one, but in pubs EVERYTHING is possible.

you should try to deny and last hit as much as possible until your level 6 where ganking usually comes in. Sometimes you can harass your laning opponent with

Overload powered auto attacks. And sometimes even with

You should always push the lane with

Static Remnant a bit before runes spawn -they spawn every 2 minutes- so you can run to runes and pick them up.

The only reason you make

Arcane Boots is, that you will later on disassemble it and make the

Soul Booster which you make into a

The other items are fairly basic.

Bottle is for HP and mana regeneration.

Null Talisman is for stats.

Magic Wand is for stats and the active is good.

you try to gank and push early towers to make gold advantage to your team. Ganking with storm will be explained later. You basicly try to get your

Bloodstone as fast as possible, and then gain stacks for it.

Boots of Travel You make these to replacement your

Arcane Boots which went for

Boots of Travel gives you some nice movement speed (highest amount in the game). Also the main thing in these boots is, that you can teleport to a creep or structure of yours every 60 seconds. Also in late game, if you happen to die in team fight, you can buy back and teleport next to the fight (if creeps or structure of yours are near).

Bloodstone gives have been explained a few times already, but I explain it one more time in a nutshell. It gives great regeneration, has great snowball potential and gives you pretty much nice amount of HP and MANA pool. Very strong item, that will keep advantage you claim at early/mid game.

Black King Bar gives you strength and pure damage. Also the main reason it is built is, that active is so great. A magic immunity, which goes down by use. It starts with 10 seconds and goes down with each use. Caps at 5 seconds. This great item allows you to initiate fights and survive them, because most of the magic can't be cast on you.

Magic Wand has been explained already. Usually you sell these items when you can claim some of the Luxury items.

You basicly try to do same things as at early/mid game. Maybe less ganking, because everyone is going to be more in groups. But it is great thing to your team, if you can kill one of them by catching them out of position with your

Ball Lightning. That can be really risky sometimes. They can bait you to jump in, and then throw disables at you and get you killed. You must have good map awareness whole game, but especially late game.

Eye of Skadi is A SUPER LUXURY ITEM. It could even be called luxury luxury item. It is really expensive but it really gives a lot of nice stats and a good orb effect.

Linken's Sphere is a good item on storm. And also fairly common too. Some people prefer it over

Black King Bar. And it gives good stats and nice regeneration. I would say it is not as powerful as

Black King Bar, but I suggest grabbing it instead of it, when enemy team has a lot of disables that go through

Black King Bar, so does

Bane's. And trust me, they will definitely save them for you.

Orchid Malevolence gives nice amount of intelligence, attack speed, damage and mana regeneration. But the best part of it is the active. A silence that lasts 5 seconds and the silenced target also takes 25% more damage. A very good item to grab later on.

Scythe of Vyse also known as sheep stick and guinsoo's. What can I say? Good amount of intelligence, some strength and agility. Great amount of mana regeneration. And amazing active; Hex, that turns the target to a sheep for 3.5 seconds. The target can basicly do nothing, but run away at a very slow phase.

Shiva's Guard gives you nice amount of intelligence and armor to tank up with. Also the aura and the active is great in team fights. Because you are basicly in the middle of fight with your

Black King Bar on as

Power Treads, you take these when you want to deal more damage than with

Boots of Travel. The pros of this is that they are cheaper by 1000 gold, and the earlier mentioned more damage. But the cons of

Power Treads is that you need to always buy and carry


The only difference in between these two builds is, that in build 1 you max out

Electric Vortex to level 4 before going for other skills. In build 2 you leave it at level 3.

I could say, that build 1 is for a bit more disable. Which is really good in ganks. But has a slightly less damage.

Build 2 is for more damage, and is more useful in solo situations, where you are the one dealing the damage and not the disabler one. Also you need to notice, that level 3

Electric Vortex is enough to get your pull to hit your

It is fairly simple. With overload you deal more damage with less mana usage. Basicly you use your

So there is 3 overloads. With every level

Overload
So basicly you deal 3 x 15 = 45 damage more with each level. And with

Static Remnant you only gain +40 damage every level + it costs more mana!, which you really have problems with at early/mid game.
Top

A lot of heroes go well with

Storm Spirit. But I want to mention especially that heroes that can follow up

Storm Spirit's initiation well works well with him. For example

Sand King. Also lanes that have some crowd control are easy to gank, so they are also friends of

The two most annoying heroes to play againts as

Storm Spirit must be doom bringer and

Silencer. Both basicly because of their ultimates. But I really would like to mention

Silencer's passive, that makes you unable to jump in and use your

Electric Vortex, because you get silenced after using a single skill. I could say EVERY silence and stun is crucial to

Also I would like to mention anti mage, but it is really up to you will he become a problem or not. Because

Ball Lightning and shut him down.

A few tips & tricks with


- You can spam your

Bottle at base to provide faster regeneration and by that get back faster.

- You can dodge skills for example stuns with your

- You can shoot your auto attack, and make it into an

Overloaded auto attack in mid air by using a skill, for example

- You can use your

Static Remnant while in

- You can reveal sight around you with

Static Remnant. Down there is few examples of how to use it to check Roshan and reveal juking enemies. Thanks to Atlas and Hades for helping me with these pictures. 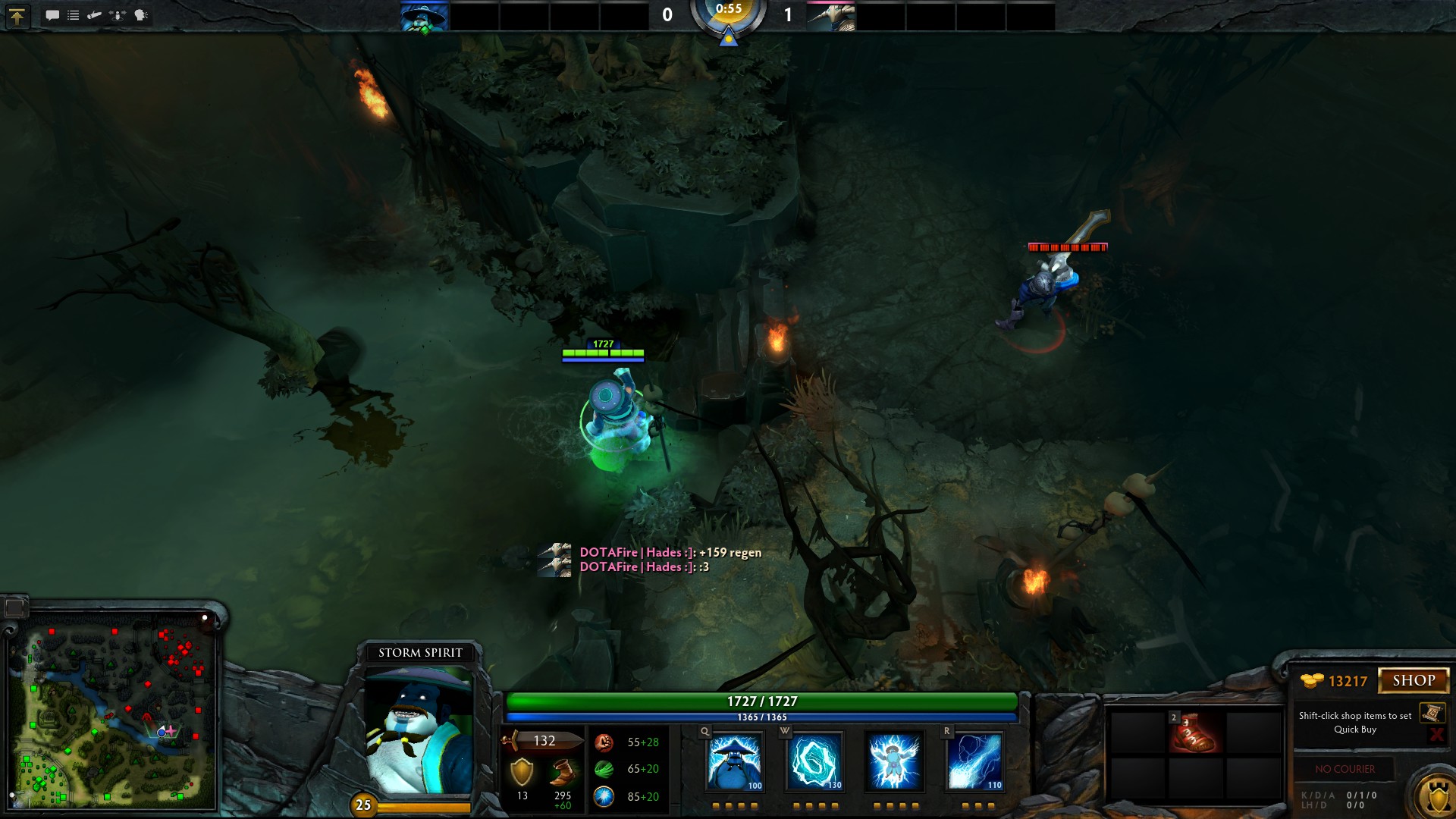 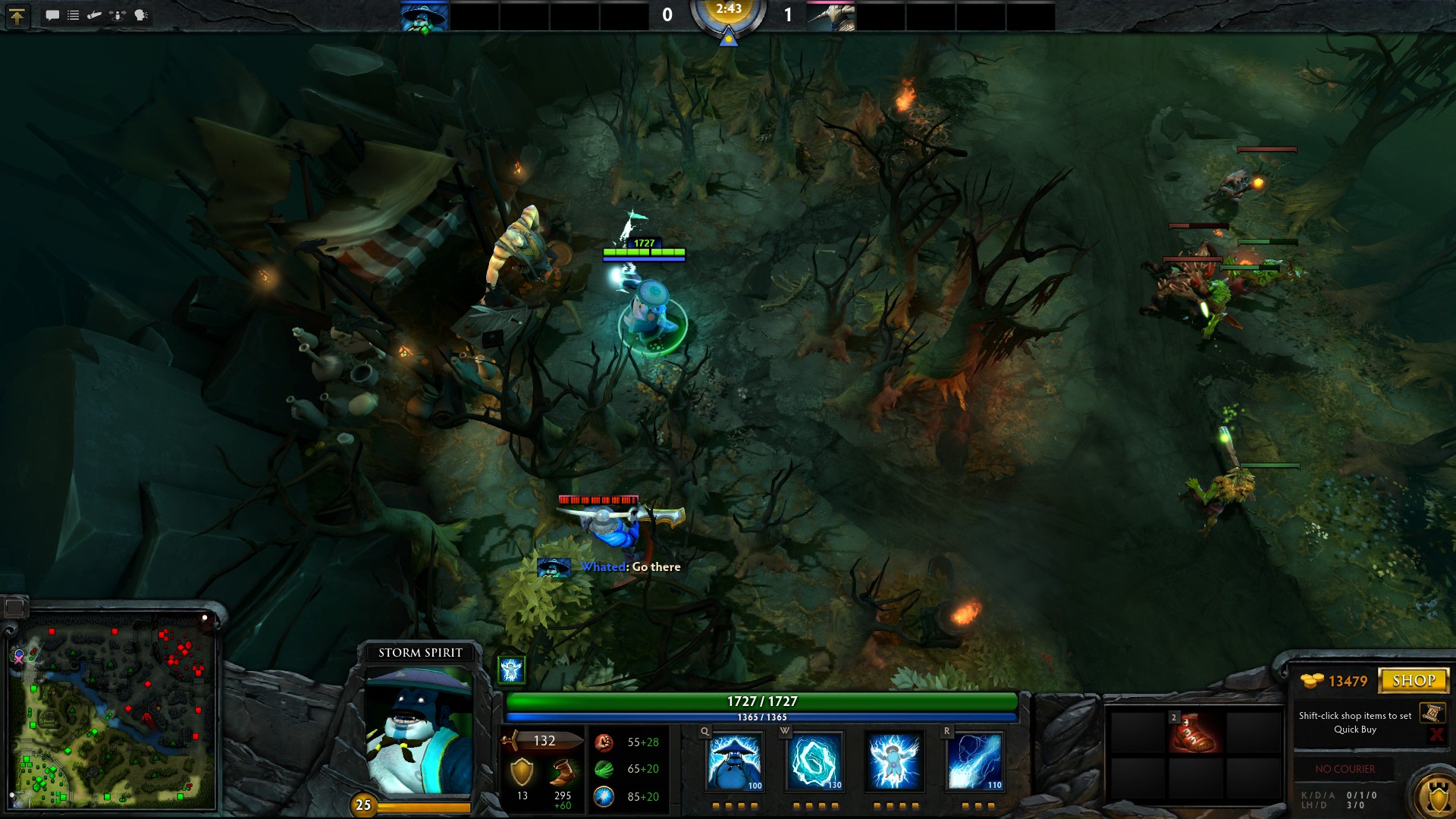 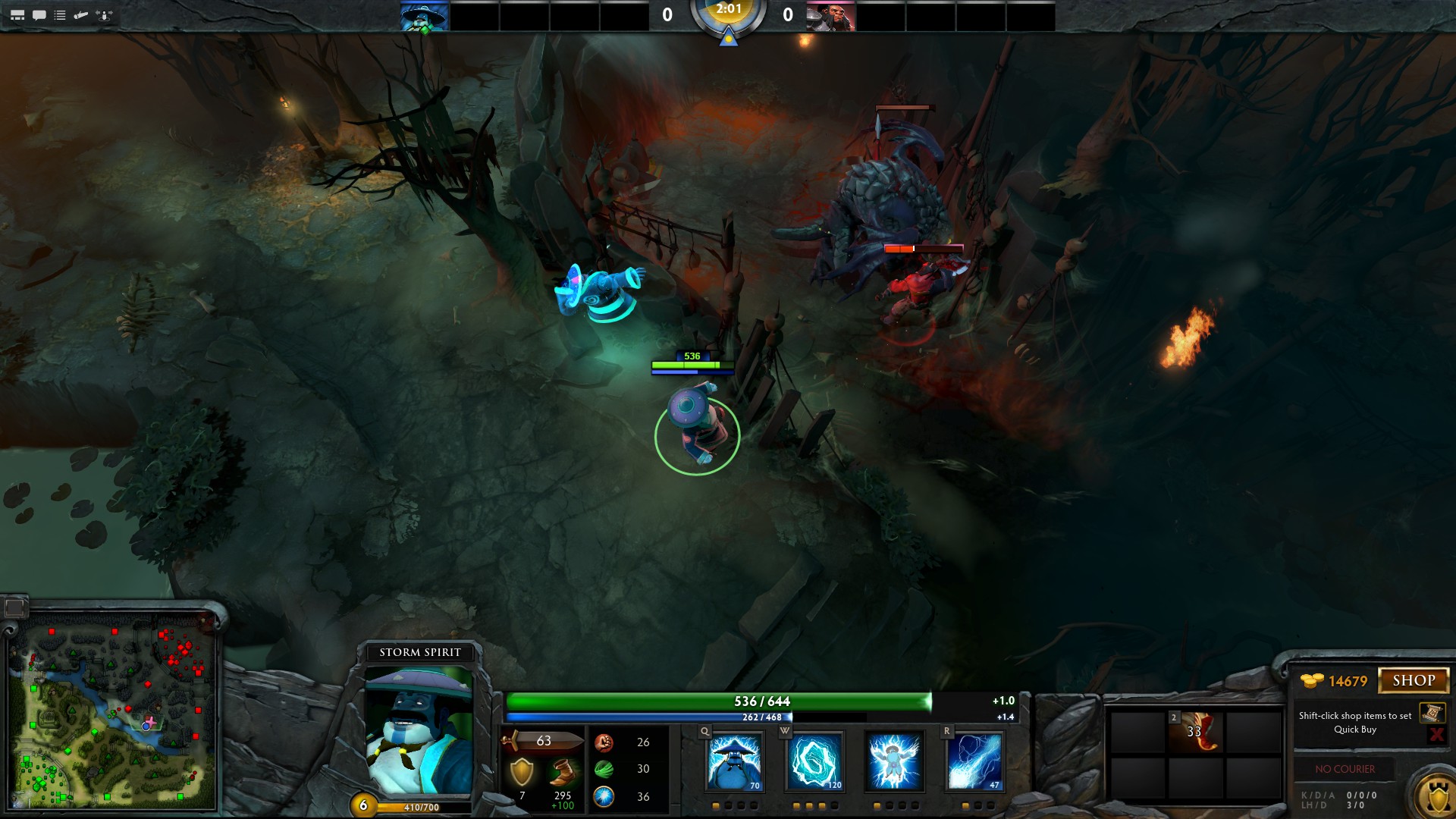 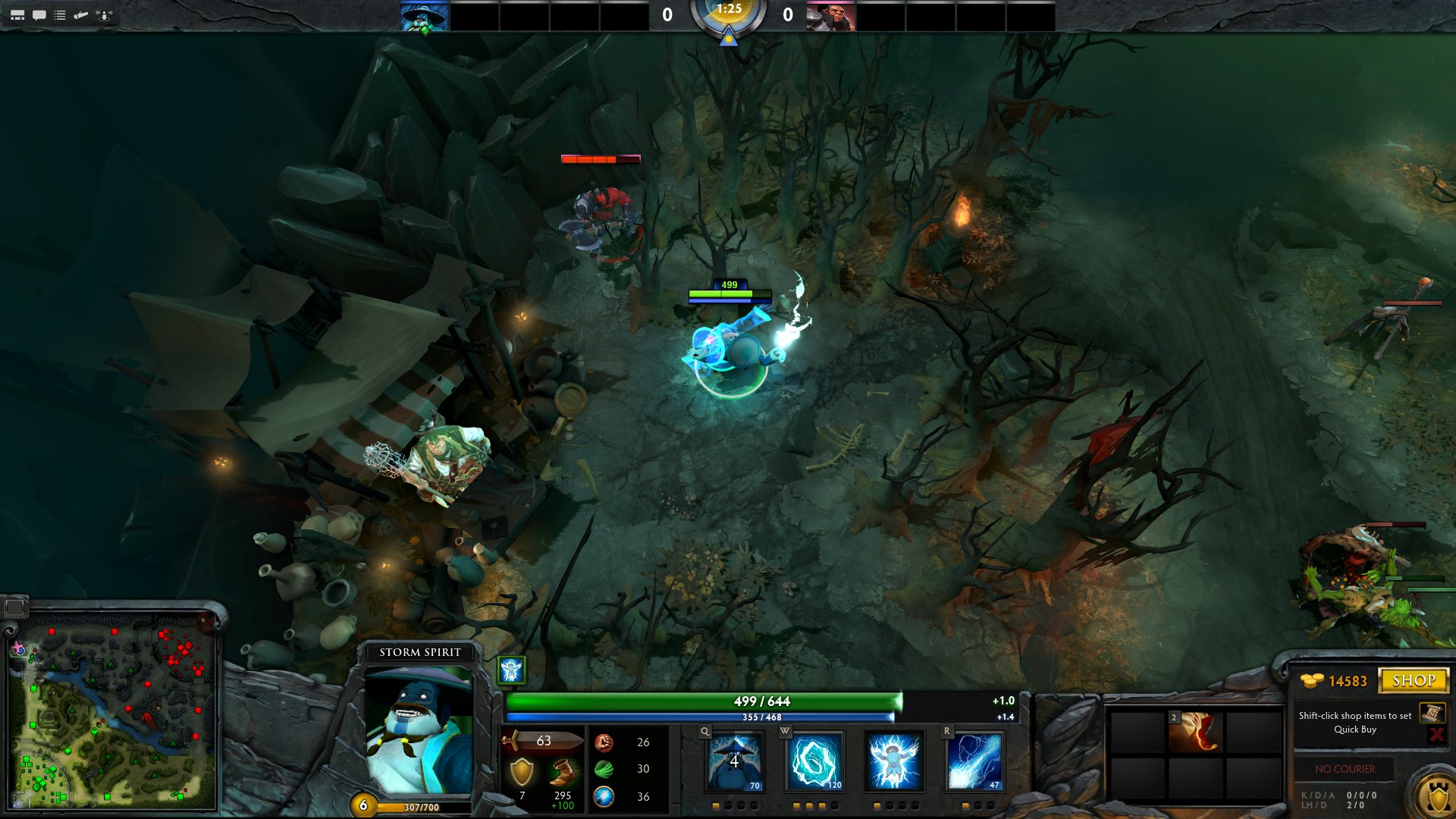 If you really bothered to read this guide, thank you. I wrote it in around 3 hours. It isn't much detailed but I tried to at least give you some vision of the awesome lovely hero

So yeah, have fun playing

Storm Spirit guide 20 minutes after this one. It has almost the same items, and I really prefer you watching it. But it has in my opinion wrong skill build.

So yeah Storm is extremely versatile, at least I say so after hours of dota experience. He can skill himself almost any way and you can't really say the best build for him because many of them work with different play styles of course. Also the situations have to be taken in mind. To be frank many items work on storm. I can't name a bad item for storm, only fact that matters is that the item has to be for INT heroes.