Core, then go back to looking at Build 1

Hi, I'm R-Conqueror and this is my guide to

Axe, one of the meanest/manliest early game heroes around. Enjoy! 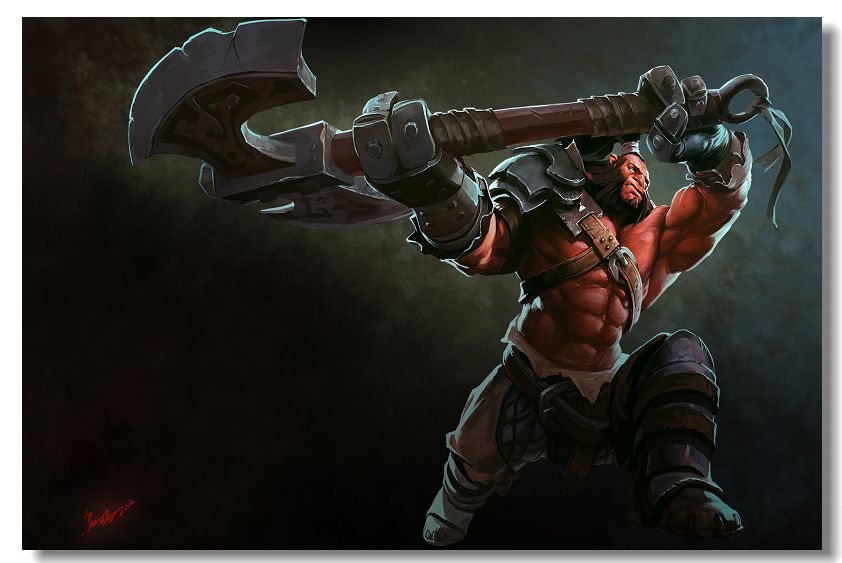 Battle Hunger got nerfed again, which means its definitely better to go manly mode now. However I still like a level of it around lvl 8 so that you can get the slow, which can be very helpful for chasing or ganking. So in general, I'm leaning toward the manliness factor, getting that blink or just running at them and making the enemy as berserk as you are.

This really depends on what your needs are. If you are going into lane I feel like

Arcane Boots are the better option, just grab more tangos and a

Ring of Health so you can take harass, have more mana for more Berzerker's call, and really be a presence in the lane. However if you want to go into the jungle or be a bit safer HP wise, go with the

Ring of Protection got buffed so that it is a really good starting item.

Arcane Boots do make it easier to build a bloodtone though, which I'll get to later.

Now, before I explain my item build, I feel compelled to explain the playstyle I am using it in. I usually jungle

Axe, except in rare cases. Then I either help out if the solo lane is having a rough time or gank if there are two teammates in the lane closest to the jungle.(Top for Dire, Bottom for Radiant.) This gives my team awesome flexibility and early lane control. Now, if there is a solo teammate going against a nasty lane, join him/her. You can turn the lane around with aggressiveness and the massive harass of

Early-mid game is where Axe is the strongest. So you start out with some damage block, regen, and stats, a pretty standard combo for laning or jungling. You then want to get a quick

Ring of Health and

Boots of Speed. This lets you stay around a long time and be able to gank and escape ganks.Remember,

Battle Hunger does an 8% slow for the unlucky hero with an 8% boost to movement speed for you. This is powerful early/mid game so you want to make sure the enemy doesn't dispel it. A hero that's a little low, or high, on intelligence(if you know what I mean) and doesn't kill something might let it kill them all together if you get higher levels of battle hunger, but since it does less damage now I'd skip leveling it in favor of Berzerker's Call. This is why you get

Arcane Boots, so that you can use your skills as much as possible. Your

Vanguard just needs to be finished out with the

Vitality Booster and then allows you to be pretty tanky and be a real powerhouse for your team. You can deal insane amounts of early game damage with

Counter Helix, while being pretty survivable with

So, the game is going on, and you start to feel like your effectiveness is wearing off. Well, that happens with

Axe, skills lose some effectiveness late game which is why you need items that can give you tankiness so you can keep spinning. Well first of all, if you are owning face, get a quick

Heart of Tarrasque which gives you all that you want. But when you aren't doing well, there are other items that can be VERY effective. Heavens halberd is an awesome item. It's not bad to build and Gives you the Slow from

Sange, along with some Strength, which you love as Axe. Also, is that carry, starting to annoy you? First, you're the man in the house, so tell that

Drow Ranger to be quiet with your disable ability from

Heaven's Halberd, and then enjoy seeing her keep missing you since you have evasion from

Drum of Endurance gives you great stats for the price, while letting you initiate better with its active that also helps your team out. Now as the game goes on, make sure to get that HoT if you were not able to pick it up earlier, you will need it.

Blade Mail under situational. Weird, I know. However, people don't normally want to attack you after you use

Berserker's Call, but if you turn on blade mail during the call... it does almost nothing. So blade mail is not as good on

Axe as you would think. If some pesky casters are keeping you from being a presence in the teamfight, a

Black King Bar is great. It gives you Strength and, along with

Berserker's Call, you are really tough to take down. Shiva's Gaurd Helps with any mana problems you might have, while giving you a great aura and slow for your team, along with some much needed armor.

"Yo, R-Conqueror, you forgot about Axe's ult bro." I was merely saving the best for last.

Culling Blade/Boom is an amazing skill. You will instantly kill anyone below 300/450/625 HP. This goes through everything. Yes, everything. I see you got a BKB that you activated at low health, TOO BAD. Dazzle: I'm so glad I got that

Shallow Grave off. Axe: I said good day Sir! Abaddon: Ha, all your damage will only heal me!!! Axe: PSYCHE!

Borrowed Time doesn't mean anything to me! So yeah... Now, when you kill a hero CULLING BOOM DOESN'T GO ON COOLDOWN. This means that you can go after the NBA dunk contest title by showing the wimps on the other team how real men score. Because of this change to

Culling Blade, I believe that

Bloodstone should be back in the equation for

Axe. If you really do want to be able to sustain your dunking ability and not have mana problems sideline you, Bloodstone will let you continually have health and mana, enough to stay in the ballgame. if you do want to go this route, don't finish your Vangaurd. You can use your

Arcane Boots (just disassemble the item) to get a fast

Soul Booster. Then when you have your

Bloodstone, you can not only have enough mana to dunk all the time but also have a great AOE heal for those extremely rare occasions where you lay down and take a break from the fighting. Yeah that's right...

Early Game: Jungle and creep pull until you have your ult and coordinate with teammates to get a good Call off. Then use the DUNK to finish the job.

Culling Blade on whoever might be getting away with low health, Don't just killsteal with it. Actually, who am I kidding, TAKE ALL THE KILLS!

Late Game: Tank up for your team. The longer you survive, the more damage you do with

Counter Helix. Don't be afraid to initiate a big teamfight. Tank towers and disrupt the enemy team as much as possible.

Axe's friends are those that can keep his mana up, such as

Keeper of the Light and

Crystal Maiden. He also helps out those who need a good target for delayed stuns, like

Ursa tear you to shreds, you can't 1v1 them at all, only engage with your team. Kiters/Orbwalkers are also hard to deal with for you, such as

Battle Hunger and deny creeps to keep them low on health.

After reading this guide, I hope you have a basic guideline to how to play

Axe in a way that is both aggressive and flexible. This is the style I use when I play him and that I hope will work well for you. Thank you for reading and don't forget to comment/vote!

axe rough
By mchip083 on May 5, 2022
Featured Heroes
Primal Beast
The Ageless Hunter