Classified Guide to Ymir the Tusk

Robe of the Magi

Always Rush unless there is pudge/lanaya/etc.

Classified Guide to Ymir the Tusk

Please provide feedback based on how this guide helped you. If there is anything wrong please tell me in constructive criticism, so I can improve this guide. 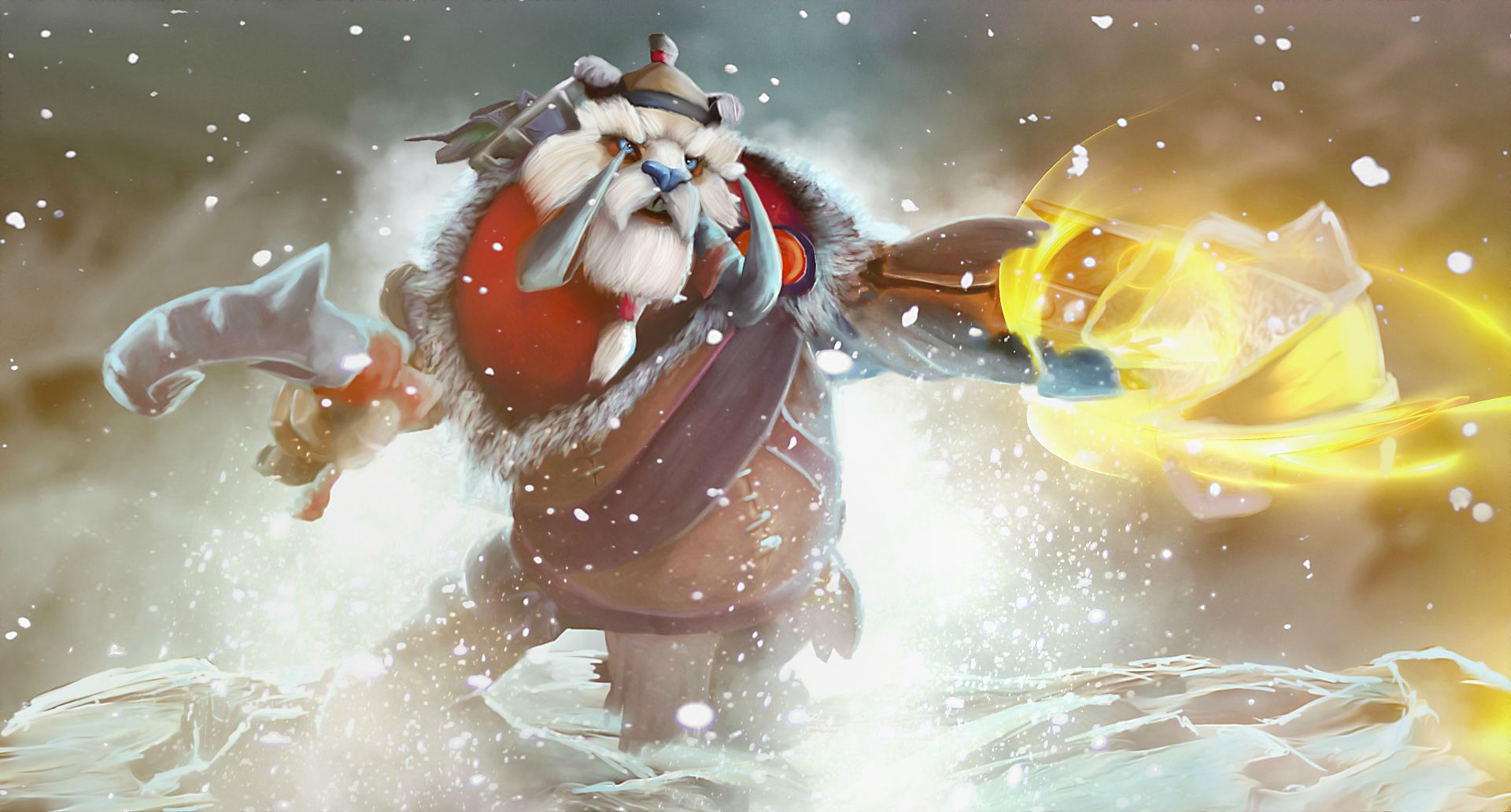 It had been a brawl to remember. There stood Ymir, the Tusk, the Terror from the Barrier, the Snowball from Cobalt, the only fighter to have bested the Bristled Bruiser in a fair fight, and now the last man standing in Wolfsden Tavern. What started as a simple bar bet of supremacy ended with four regulars, a blacksmith, and six of the Frost Brigade's best soldiers writhing against the shards and splinters of almost every bottle, mug, and chair in the building. The Tusk boasted and toasted his victory as he emptied his brew.

No sooner had the defeated regained consciousness than the cries for double-or-nothing rang out. The Tusk was pleased at the prospect, but none could think of a bet bigger than the one he just conquered. Horrified at the damage to his tavern and desperate to avoid another brawl, the barkeep had an idea. As skilled as he was, Ymir had never taken part in a real battle, never tested himself against the indiscriminate death and chaos of war. He proposed a wager to the fighter: seek out the biggest battle he could find, survive, and win it for whichever side he chose. The stakes? The next round of drinks.

Tusk is a strength initiation/ganking hero who heavily relies on good teamwork to be of any use at all to the team. He is viable on any lane and is effective from level 2 all the way to late game if given enough farm. He is not difficult to play, but he does require some teamwork.
Top

Tusk is mainly a Ganker/Initiator. He is in no way a Hard-Carry. He is not recommended for but is viable for a Semi-Carry or a Support. So only pick

Tusk if your team is in need of any of the roles he is viable in.
Top

Tusk is a very unique hero because of his skills which are all very useful in teamfight situations and ganking situations. All his spells do require good timing and team coordination.


Ice Shard is an active unit target skill that requires good timing skills. It releases a bunch of ice shards in the direction you clicked and if it comes in contact with an enemy or reaches its maximum distance, it will deal damage and make a impassible barrier for 5 seconds. Take note that this will either help your team alot or make them rage at you depending on how you used it.

Snowball
Snowball is one of the best initiating skills in the game. It wraps around all allied heroes around you in a snowball that charges at an enemy hero and stuns on contact. Always use this in a teamfight. Great with heroes like

Frozen Sogil
Tusk's one and only boring spell. Although boring in looks may even win a teamfight if placed correctly. It is a moveable ward that gives vision and slows enemy and their attack speed. Always use this in a teamfight and place it where you think the enemy carry will be.

Tusk's most fun spell to use. It prepares a crit punch so that the next time you attack an enemy, it will deal 3-4 times crit to the enemy and disable it for about 1 second. The best part about this is that it launches the enemy into the air and it makes a huge text showing WALRUS PUNCH! Always remember to use it on an enemy below 50% health as it will deal more damage that way.
Top

For this guide, I have created two builds. The normal first one is what you should use in most games. The second build is meant for roaming/ganking which requires good teamwork, so only use it if you are playing with friends. Both builds end up the same mid-late game because they mostly emphasize on early game.

Boots of Speed and

Bottle. Once you got that done, you should start ganking other lanes or cooperate with your laning partner and try to get a kill. Once its mid game just help your team with initiation and team fights with your

Armlet of Mordiggian before the fight starts and use

The ganking build is pretty much the same as the default build except it is expected for you to gank starting from level 2. Only a few starting items are selected so that you can rush a

Boots of Speed. Always constantly rune ***** if your mid does not need it and gank all the lanes you can with your combo. Instead of getting an

Armlet of Mordiggian like in the default build, you rush a

Phase Boots are also gotten to dish more damage and also chase your enemies in a gank. Get an

Orb of Venom if you feel that enemies get away too easily.

You may skip this part if you hate reading long paragraphs.

These items are gotten for survivability early game and last hitting power.

Iron Branchs will be turned into a

Gauntlets of Strength will be turned into a

These items are pretty standard on several strength heroes for early game. These items all give survivability and stats. Get a

Bottle if you have mana problems but only bottle runes if there is nobody else in need of it (ex.

Pudge) . I will explain which boots to get later on below.
Mid Game/Core

Drum of Endurance (Optional if team already has one)

Tusk. All the other items help you dish out more damage with your autoatttacks and your

Most of these items you end up only getting one of, but if the game goes really late game you might end up with two or more.

Heart of Tarrasque is gotten obviously for survivability but it also gives you 40 more damage. Get

Black King Bar if there are many disablers like

Tusk and also reduces armor of enemies (Also works on towers!). Only get this if nobody on your team will. Get

Black King Bar if there are many disable/stuns on the enemy team. Battle Fury works great with tusk because of the cleave and damage. Great for pushing late game and also adds a cleave to your walrus punch.
Situational

These are all Situational/Luxury Items that are viable for

Tusk. I do not recommend this, but a

Vladmir's Offering is somewhat viable for

Tusk if you feel like you need that lifesteal for you and your team.

Monkey King Bar should only be gotten if there are evasion heroes or butterfly carriers.

Assault Cuirass should only be gotten late game if you have the money and if your team needs one. It benefits

Tusk alot with attack speed and armor. You may want

Shadow Blade if your team has invis heroes like

Riki though.
Choice of Boots

You should most of the time get Power Treads on the default build because of its beneficial attack speed and stats along with its treads switching mechanic. Phase Boots are viable and good for ganking because of how you can chase enemies faster and also you get more damage output. Only get Arcane Boots if you have mana problems. I do not recommend it because usually the support should get it and also you should solve your mana problems with the bottle. Boots of Travel should only be gotten late game if you are flowing with cash. Never get Tranquil Boots.
Top

Tusk, you need to contribute to teamfights and ganks as much as you can. Do not spend your time farming all day.

Tusk heavily depends on his skills, here is the combos I use with him.

Tusk should do. (Only for default build)

[Levels 1-5] - Farm and get last hits. Only use your skills for escape of a secured kill.
[Levels 6-10] - Gank, Gank, Gank. Use the combo i mentioned above to gank.
[Levels 11-16] - Team Fight time. Use the combo i mentioned above and snowball your teamates.
[Levels 17-25] - Game should be over by now, but if it is not, just keep pushing and contribute to teamfights. You may farm jungle if you absolutely need to.
Top

Tusk are those who can help in his ganks or follow up with his iniation Examples are:

Tusk are those who can counter initiate, disable/silence him, or burn his mana. Examples are:

Anti-Mage (This guy will seriously piss you off)
-

Rubick! He is a big counter to you. He can not only disable and debuff you, but will provide magic resistance to his teamates. He will also be able to steal your spells which are all useful to him. Keep in mind that Rubick's stolen walrus punch is RANGED, so it is better than yours.

Disruptor! I have only one word to say to every single one of his spells which are annoying to

Funny how most of his friends are also his foes. :)
Top

So, this is my guide to

Tusk. Hope you enjoyed reading it. Please comment on what you liked about it and how I can improve it. Thank you all for reasing this and I hoep you get better with