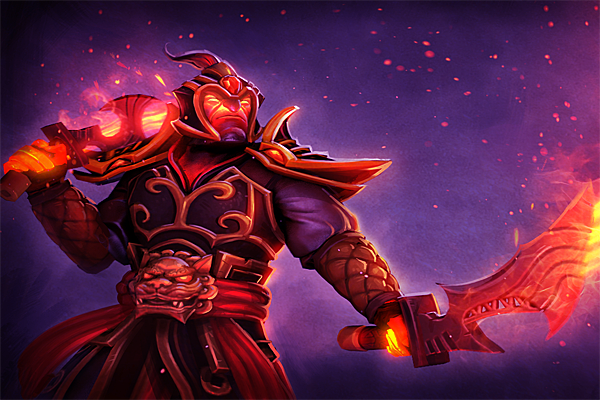 Balance in all things

Hello, I'm a nobody from obscenely low MMR. Today I would like to show you a build for Ember Spirit that very few people know about.


The purpose of this guide is not to show you the standard way to play ember spirit, so I intentionally left out most redundant information. It should be used in combination with one of the more standard guides.
Top

If you activate the following immediately after one another in this order:

1) You deal Sleight of Fist damage
2) Searing Chains applies to two of your sleight-of-fist targets
3) Shadowblade's 175 bonus damage applies to every struck target.
4) You remain invisible after you finish, which can be used to normal attack for 175 bonus damage again.

Getting the combo down

It can be pretty hard to activate shadowblade, Sleight of Fist, and Searing Chains in the right order within a frame of 0.3 seconds. There are two solutions I would recommend:

1) Bind shadowblade to q, sleight of fist (quickcast) to w, and searing chains to e. Then whenever you need to do the combo, typing qwe in order quickly should be easy. This is my preferred method, because the macro fails more often due to lag.

2) Use the following macro (assuming you're using windows):

Download and install AutoHotkey, right-click your desktop, select new -> AutoHotkey Script, right click the thing you just created and select edit script, then paste this code at the bottom of the text file that pops up:

Then save the script, right-click it, and select run script. Now whenever you try to press ` you will instead press 4wq (with short delays in between so that your keyboard doesn't mess it up). You can press Shift+Escape to exit the script when you don't want it, then run it when you want it again. Bind shadowblade to 4, Sleight of Fist (quickcast) to w, and Searing Chains to Q.

These pros and cons are relative to a

Desolator-first ember spirit is pretty much only good for early teamfights, because it gives significantly less damage.


* = More combo (Shadowblade -> Sleight of Fist -> Searing Chains) damage unless there are three enemies grouped up right next to each other. But cleave also pierces armor, so in the late game battlefury ends up doing a little more damage than shadow blade. And of course, battlefury does way more damage against illusion heroes.

Silver Edge only applies to one target because there is no fade time, which means it is a downgrade rather than an upgrade, and should never be bought.


*** = Shadowblade has a mana cost and doesn't give regen. But that doesn't matter much, because ember spirit can full-heal with tp scrolls.
Top

With Shadow Ember it is especially helpful to max

Searing Chains first, since the extra damage works well with your high-cooldown combo.

Sleight of Fist or

Flame Guard next is situational: Sleight of Fist for the cooldown reduction, Flame Guard for the magic shield.

Finally, I sometimes don't put a second point in

Fire Remnant until the basic skills are maxed. It only gives you +50 damage when you teleport to a remnant near an enemy, so unless you're activating remnants to nuke an enemy rather than just to move around, the alternatives are usually better. I max it against heroes like Chaos Knight who have just a few high-health illusions. With battlefury you could just use Sleight of Fist on them, but not with shadowblade.

Remember, I'm only discussing what's different for Shadowblade Ember, so these item sections won't be long.

After shadowblade, there are four big items you can choose between (arranged in order of my preference)

Battle Fury maximizes Sleight of Fist damage. If you do buy a battlefury, the next best offensive item to buy is... more battlefuries!

Desolator's -7 armor for 15s on the whole team is devastating, and makes up for your lack of cleave. And now that you have a lot of damage with shadowblade, armor shred will be more effective.

Eye of Skadi's debuff is shorter than Desolator and about as effective, but it's one of Ember's only good health items. If you do decide to buy this, buy an orb of venom early, it's great on ember.

Diffusal Blade's combo damage increase is lower than desolator's if you count manaburn and armor-shred, but it also gives 80 mana, 25 manaburn, 20 attack speed, 3 armor, a slow and a way to purge silence.

After buying on of the items above, purchases get highly situational, so you can look up one of the main guides for that. Although tbh the game is usually over at that point.

Town Portal Scrolls are extremely powerful on Ember. In case you don't already know, you can place a remnant down, tp to fountain, wait to full heal, then activate your remnant to return to battle. This is even more important with Shadow Ember because of the mana cost on shadow blade and lack of mana regen from perseverance.

Boots of Travel are basically like a better Midas on Ember Spirit. Buy them early and you'll have extremely high sustain for free. The movespeed bonus is also good for Ember's flameguard.

Bottle is also especially good on Shadow Ember. Shadow Ember is a relatively early-game, so he's best played as a bottle-rushing mid.

Soul Ring, and other alternative sustain items just aren't strong enough for Shadow Ember. It's much better to be spamming those TPs. Still, they are sometimes worth considering if you still need more mana after spamming TPs, but usually you need item slots instead.

You can find a modified in-game version of this guide here, or look up the guide of the same name in-game.

EMBER SPIRIT 7.30 BY DUCAN - RESUMEN
By on May 31, 2022
Featured Heroes
Primal Beast
The Ageless Hunter