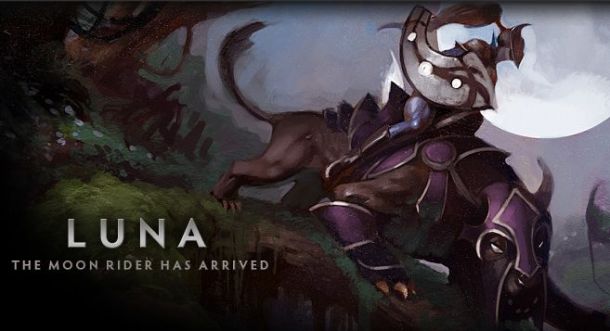 Description: Luna, the Moon Rider is a Ranged Agility carry hero. Even though she can be seen as a tempting target for enemy heroes, Luna possesses solid early game laning presence due to her Lucent Beams, a cheap, low-cooldown nuke, and her Lunar Blessing aura, which grants all nearby allied heroes increased damage. In mid-game, she becomes far more formidable with Moon Glaives, allowing her to decimate entire creep waves with two to three attacks, and Eclipse, which can instantly kill a hero if that hero is unfortunate to catch its full blast. Not a hero to be underestimated, yet painfully fragile at times, Luna must be played as and against with care.
Luna can make use of her easy to use skills in combination with key mechanics such as animation-cancelling, and requires good, some might say conservative, judgement to play due to her lack of escape ability and average health. She is recommended for intermediate players.

Lore:
How had she been reduced to this? She was once the Scourge of the Plains, a merciless leader of men and beasts, and able to sow terror wherever she dared. Now she was far from her homeland, driven half mad from starvation and months of wandering, her army long dead or turned to worse. As she stood at the edge of an ancient forest, a pair of glowing eyes spied on from an elder branch. Something beautiful and deadly sought a meal in the wilting dusk. Without a sound, it turned and left. Fury overtook her. Clutching a rust-eaten dagger, she charged after the beast determined to reclaim even a shred of her past glory, but her quarry would not be caught. Three times she cornered the creature among the rocks and trees, and three times she pounced only to witness its fading shadow darting further into the woods. Yet the full moon shone brightly, and the creatures trail was easy to follow. Arriving in a clearing atop a high hill, the beasts massive feline form sat in the open, attentive and waiting. When the woman brandished her dagger, the creature reared and roared and charged. Death, it seemed, had come for her at long last in this strange place. She stood, calm and ready. A flash of movement, and the beast snatched the dagger from her hand before vanishing into the forest. Stillness. Hooded figures approached. In reverent tones they revealed that Selemene, Goddess of the Moon, had chosen her, had guided her, had tested her. Unwittingly she had endured the sacred rites of the Dark Moon, warriors of the Nightsilver Woods.

She was offered a choice: join the Dark Moon and pledge herself to the service of Selemene, or leave and never return. She did not hesitate. Embracing her absolution, she renounced her bloody past, and took up a new mantle as Luna of the Dark Moon, the dreaded Moon Rider, ruthless and ever-loyal guardian of the Nightsilver Woods.

Hello everyone, I'm D3n1eD, and this is my second guide on DotaFire, first one being about Traxex the Drow ranger. Luna was the hero that taught me to play DotA,she was the first hero I started stomping with. It was back in the day when her ultimate had ministun and unlimited beams on any target. Good ol' days. She is my favourite along with Drow. Enough of my ****talk, onto the guide!

Cons:
-fragile
-item dependent
-not so easy as she seems

Lucent Beam Cheap,spammable,single target nuke with ministun. Point and click spell,good for harassing lane opponents,stopping channeling spells (TPs!) and getting kills. Crucial to max at level 7 because ultimate's beams do equal damage as your Lucent beams. Max it at 7

Moon glaive Powerfarming skill. Basically doubles your damage output when maxed,just splitting it on more targets. Makes you a beast late game because it damages everyone near you. Broken when used with

Manta Style. Thanks to this skill,you can kill stacked ancients before anyone else.

Lunar Blessing This skill,along with

Lucent Beam is what makes you different from most of the carries. You are strong early game. Allows you easy last-hitting early,and gives all nearby allies boost as well.

Eclipse Really powerful one, can turn 2v1 or even 3v1 gank into a double/triple kill for Luna. Hits random targets,and is limited to 4 beams per target (with scepter 6). Better use it when there are no creeps around to maximise damage dealt.

Lunar Blessing is taken on level 1 to provide you with easier last hitting. Also,in early game it has largest impact, if you max it later, you won't feel the difference in damage you are doing.

Lucent Beam is maxed first because our ultimate does damage based on level of Lucent beam.
Also it is rule of a thumb to max out nukes as soon as possible as they are not as strong later.

moon glaive Do not level this early. It is pointless and actually does you harm. People say they harass with it. What you actually do is either skip Lucent beam or Lunar blessing by leveling it,and push your lane which is something you do not want. And you don't have the damage to harass effectively.

Eclipse Level it whenever you can. Simple.

Magic Wand Helps you sustain the lane versus heroes that spam their abilities alot.

Phase Boots but I say treads are better. Why? Well,Luna is a glass cannon, and needs any HP she can get. While someone might discuss that with phase you can run away more easily,and while that is true,you already are fastest in the game. If you get stunned,you can't use phase, and only raw hp helps you then. Also tread switching is useful for that 1 beam to get the kill,or Agi treads while farming.

Manta Style Works very well with everything the hero does, self purge is a lifesaver, allows you to dodge projectiles with slower travel speed and many abilities with a bit of practice. Make sure to send your illusions to push lanes which are not safe for you to tread into, maximizing your GPM (gold per minute). Also has some sick synergy with your moon glaive. Manta Luna hurts a lot. Makes people sad.

Black King Bar A must on Luna. You are low HP hero,and best way to deal with you kind are chainstuns or nukes. Or both. BKB solves this problem,allows you to bounce your glaives on enemy team without interruptions.

Butterfly Gives evasion,damage,agility and attack speed. Accelerates your farm beyond belief. What's not to like?

Aghanim's Scepter Honestly just a fun build. Items that give you raw stats scale better with Luna into the lategame.

Butterfly carries. Buy it when needed.

Dragon Lance A great item on

Luna, gives you HP, and agi providing damage, armor and attack speed. Great pickup early to tank you up, really cost effective and the bouns range is also nice. Could situationally be upgraded to

Hurricane Pike if you need to create distance from someone who is man-fighting you, also helps you chase and position yourself.

Your role in team.

Get as much last hits as you can in the lane, rotate to the jungle when you get lifesteal mask, acquire your core items and either start 5 manning with your team or keep clearing the jungle and splitpushing the waves with your Manta illusions. Your priority should be highest possible GPM and keeping the lanes pushed as far as possible at all times, getting towers when enemy is unable to defend them (most likely because they just TP'd to other lanes) and help your team whenever they fight the enemy near your towers/shrines.

Slark and the sort.

sange & yasha In a situation when there is nothing to purge, you might opt for S&Y. Manta is still better for you since your illusions benefit from Moon glaive but coupled with Satanic S&Y gives you amazing status resistance, decreasing the possibility of you being chainstunned to death.

Linken's Sphere Where there are particularly dangerous single target spells this comes in handy.

Abyssal Blade just to name a few to give you a general idea.

Hood of Defiance Abudance of magical damage warrants this item choice, helps you stay alive long enough to do your job.

Hand of Midas When you have a free lane and feel greedy, you can get HUGE with midas in short time.

Ethereal Blade Useful against physical DPS monsters such as

Aeon Disk If the enemy team tends to jump you and blow you up before you have any chance to react, aeon disk is the way to go.

Abyssal Blade help you hunt particular heroes who are mobile. Abyssal also comes as an alternative to hex if your team lacks disable, but has pathetic range of stun. Tradeoff is that it makes you more tanky and you have a low chance of stunning with your auto attacks.

Do not go in first. You are glass cannon. Let your initiators do their job. After that,clear any creeps there are,it should be pretty fast because of your moon glaives. After that,cast your ultimate,pop your manta (if you don't have to save it for dispells),and focus the highest threat. It will bounce off,and combined with your ultimate you will deal tons of damage. Enemy team probably will focus you because of your damage potential,so position yourself well.

Shadow Demon is both a great friend and a foe, making 2 illusions of you.

Slark is pretty nasty to deal with if he gets

Shadow Blade before you get a force staff or Hurricane pike. Your ultimate is useless against him as long as his is off CD.

Any support is good for you on the lane, but you really like

Vengeful Spirit for the aura, you love

Pro game at international featuring Luna as a suprise pick. If you prefer to watch it in DOTA 2 here is match ID 37095808
The replay is quite outdated, I'll find a quality one from the new patch in near future when the dust settles for 7.22b.

To do in guide

Update the guide if any changes are made to Luna/DOTA 2 patch.

I hope you like the guide, and more importantly that you learned something from it.
Please vote up, it shows me that my effort was not in vain. Any constructive criticism is appreciated. If you have any questions,suggests or anything feel free to post it in the comments or PM me. Thank you for your time reading this guide.