Supah's Guide to the Omniscience

Supah's Guide to the Omniscience

Introduction to the Omniscent Knight

Omniknight is a very hardy Support Hero who can double as a Semi Carry and a Nuker. He is often overlooked because of the Diffusal Blade making one of his abilites, Repel, useless. Even then, Chuck Norris is a force to be reckoned with. Especially with Carries and Initiators. His great Strength, good HP Pool and decent Mana and Intelligence makes him a great choice when needing a support in the team. He can seriously do anything! No Healers, OMNIKNIGHT. Need a safe push? OMNIKNIGHT. Teammate in trouble? OMNIKNIGHT.

Introduction to Omniknight by DotaCinema:

Omniknight can babysit those who are fragile and squishy and greatly help those who need some extra help in killing an enemy because the dude's friggin armor is high and it is becoming frustrating. He is excellent lane support as he can push back a lane with a click of his ultimate, Guardian Angel. He can also help the push into enemy base with the same ability. Trust me, I've done it countless times with friends. His Healing is great for those that are just running back to base because their hp is down. Or to have staying power on a carry/nuker. He is also a free BKB to any ally. His Degen Aura adds to the survivability that Chuck Norris has. All that make Omniknight an excellent addition to the team.

Items: Why and for What Do I need Deez?

Trust me, when you start, you are going to want DAT HEALING SALVE. People are going to come down on you because they know the force you are and how valuable you are to the team. Tangos too are a necessity. You're going to want 3 of those Clarities. You'll be running out of mana before you know it when trying to kill an enemy hero early in the game. Plus your Lane Buddy might need some mana too! Remember, with Omniknight, SHARING IS CARING. Animal Courier because everyone is going to rely on YOU to buy it. If someone else bought it already, get a few iron branches.

You will soon realize that you are kind of slow, even with that slightly above average movement speed. So you're going to want a Boots of Speed. Plus it has synergy with your passive, Degen Aura. That Ring you get, you're going to turn into a Vlad's later. Flying Courier is a necessity early game. Your Lane Buddy is going to want to get some quick items without losing XP, so bam. Flying Courier. If someone already bought it or you're feeling you have enough health, get a Soul Ring. Because Omniknight's good Health Pool and lacking intelligence, Soul Ring would give you enough mana for another Purification.

Arcane Boots are a near necessity for Omniknight because of his lacking Mana pool. They'll provide you with good mana and good regen when low on Mana. Drums of Endurance are good too, they'll help you in the long run along with your Lane Buddy. They can turn you into the carry if played correctly. Plus you may need the charges for escapes too.

BUT SUPAH! WHAT ABOUT THE VLADIMIR'S YOU MENTIONED EARLIER?!
It's better to let the Vladimir's for last, you'll want to invest in the other items before this. The Vladimir's can let you go alone against creeps and jungle by yourself. With it, you can also help someone else get health and xp at the same time. Mekansm is needed because, well, YOU SIR ARE A SUPPORT. You're probably playing a carry or pusher but in the long run, you're keeping your teammates alive with Purification and more with Mekansm.

Need I say anything? Of course I do!
Radiance, you don't need it. But. It's nice to have when pushing or defending a Lane. The Euls help to not let anyone escape the Omniscience. If they are running because they know they can be nuked by Purification, stop them in their tracks with Euls! Shiva's Guard is great with Omniknight, it stacks with the Degen Aura so your enemies will be raging so hard because they couldn't escape. Plus it makes him tanky. The Blade Mail adds to the tankiness and allow him to return damage dealt to him. If he is getting nuked, activate that **** and purify yourself to get a neato kill. Sange and Yasha are not very necessary until much later into the game, where who kills who first is crucial. Same with Mjolnir.
Top

THIS HERE IS YOUR BREAD AND BUTTER. The entire reason why Omniknight is such an EPIC support/nuker. 360 Heals is good enough for those that need it. Especially with Melee heroes. The reason being it doubles as a very effective nuke. Plus the damage it deals is PURE. No reduction from Armor! It is a great skill early in the game and adds to your survival later. You will seriously want to get this first. Everytime you heal someone, you get the nice feeling of Your text to link here...

OH NOES! WITCH DOCTOR IS NUKING ME WITH HIS ULTIMATE! SOMEONE HALP! Dudududun! BEWARE THE OMNISCIENCE!
This skill is a great support ability and a nice disable. This skill makes anyone impervious to magical damage plus to Cloud Str- I mean Juggernaut's Omnislash. You can even use it on enemies to disable self healing spells. Plus it makes Sniper rage so hard.

NO ONE CAN ESCAPE THE OMNIKNIGHT! Except for SB, those with Invisibility, Slark and Windrunner.

THE ULTIMATE PUSH! Physical Immunity means the most epic push/gank ability in the game. The problem is it's 7 second duration and 150 second cooldown. That can be fixed with a Refresher Orb but it isn't necessary. Keep in mind, if you Repel a teammate after using the Ultimate, they will lose the effects of Guardian Angel. HOWEVER. If you put Repel on them first, then Guardian Angel, they will become completely invulnerable to damage.
Top

Friends and Counters of the Omniscience

Good friends of Omniknight are those who hit fast and/or hard. Basically carries or nukes. 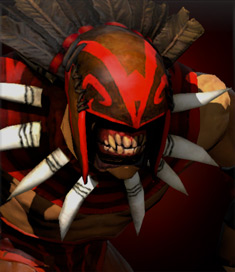 Bloodseeker is a good friend, maybe because me and my friend own with the two of them in bot. He can gank when needed and can even save Omniknight's life Late-Game. Early game, Bloodseeker will be dependent on you to aid in his quest for coin and kills.

Sniper is also a good friend of Omniknight. His range is unmatched and can aid in carry Omni to stop those harassers. Plus Omni can help him back when that Spirit Breaker comes along to kill Sniper.

Dudes who can freaking shut your abilities down in a second.

Riki is so annoying when Omniknight goes on his own. Smoke Bomb will disable your abilities and slow you down. Then Riki comes along to backstab you. My advice? Don't run, get out of the Smoke and use Purification, then run.

You want to know how I feel about Silencer with Omniknight?

If you don't have someone who can take out Silencer or be Silencer or the enemy Silencer is stupid, you sir are ****ed when you push. Use Repel if in sight of Silencer and wait it out or freaking run.
Top

Omniknight is a great support and can carry for the team if needed. If used correctly, you will become a valued team member and your friends will try to keep you alive as long as possible. Trust me. Some dude online sacrificed himself to help me escape from Ursa. Then we killed him. TEAMWORK.

Thanks for Reading and I hope that this guide to the Omniscience helps you. This is my first guide and I wanted to make it because not enough people see Omniknight as a very good character. Hopefully you'll prove them wrong.

May the Omniscience be with you.