Early, IN THIS ORDER

Pudge quite a lot and would consider him my primary hero.

Pudge is a fascinating combination of timing, pattern recognition, knowing your abilities and their ranges by eye, and feeling like a raid boss late game.

To be honest, I tend to like to play hero's whose sole purpose is to annoy the **** out of the other team (I.E.

Keeper of the Light), and

Pudge is the best of the best at doing so.

Clarity. This is my standard opening every game, and is a perfect balance for the way I play. This may vary depending on your playing style. Some players prefer to get an early

Bottle, yet I prefer to focus primarily on last hitting and avoiding needless damage early game rather than running back and forth grabbing runes and playing aggressively.

Pudge is a melee hero, last hits and denies aren't the easiest to obtain, especially when playing against skilled players using ranged heroes.

I've found that 9/10 times, the mid hero will underestimate the tenacity of

Pudge's early game damage. You will find your opponent dancing in circles around the creeps in an attempt to gain a shield between you and a potential hook. At this point in the game, the absolute EARLIEST I would use a

Meat Hook is once that ability reaches level 3. And only so when you have an opportunity to pull them into the tower and follow up with a

Rot. You really only get 2-3 chances at a hook early game, MAKE THEM COUNT.

One opportunity that is commonly missed, is that enemy heroes will find themselves feeling safe on the other side of a creep wall and will allow themselves to walk all the way up to that wall, even within your

Rot range most times. If the lane is pushed enough on your side of the river, run through the creep wall, throw a

Meat Hook, and chase them down with

Rot. Most times this is enough to kill them, even without a perfect opportunity.
Top

Pudge it is your JOB to gank. Do NOT sit in the middle and think that you're going to farm yourself into carry-mode because it won't happen. The point of

Pudge is to A: Suppress the other teams heroes with ganking/harass, and B: Become a durable tank hero through hero kills adding strength with

Flesh Heap. I make it a general rule not to gank prior to level 6. This is because of the weakness/range of your hook prior to its upper levels, and the lack of ability to hold heroes in place using

Meat Hook locations that I commonly use. RED refers to standard Fog Of War hooking opportunities. BLUE dots refer to awesome hooking locations only obtainable through the use of 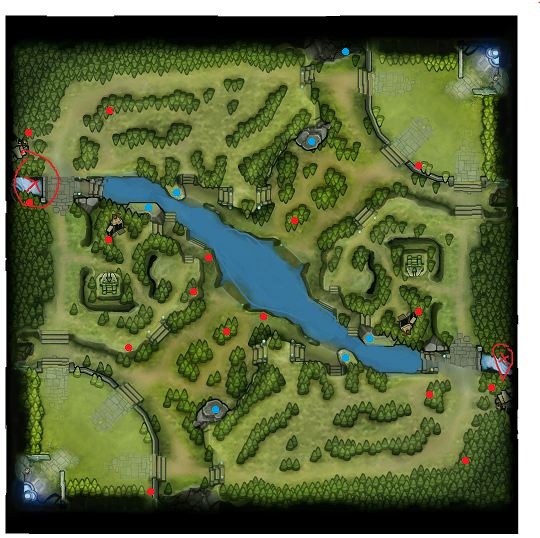 Obviously these are not the only spots that

Pudge is able to throw hooks from the darkness, but these specific locations are favorites of mine, due to being able to see while not being seen.

Very much basic late game. If your team is winning, using

Meat Hook to pull heroes outside of their base's walls is a great way to lower their hero count and prevent them from engaging.

If your team is losing, stay inside your walls and

Dismember while in range of your own towers to keep their team from building strength.

I use Mana Boots every game for

Pudge because it allows for me to throw hooks aggressively once I get them. This may cause your team to think you're missing your hooks 50% of the time (probably because you are). But in the overall scope of things, without taking risks you aren't going to land any badass hooks. And there really is no detriment since the cooldown on

Meat Hook is extremely low, and you have Mana Boots to instantly gain any and all mana used on the missed hook.

When you throw a

Dismember on the target immediately after, before they even get to you. The ability will queue and initiate as soon as they are within range. This is helpful for keeping a hero in tower ranged when in mid-lane.

Meat Hook at point-blank when using

Rot on a hero. Almost always they won't be expecting to lose an instant 360 health and think they are about to kill you so they will stay. Use this to quickly finish them once they reach this point.

That's about all I can think of, Happy Hookings!

THE ULTIMATE PUDGE GUIDE BY PEDRO✨
By oitinho8 on February 25, 2020

Pudge tank
By Tunnu on May 2, 2020
Featured Heroes