Cutting Every Thing with TimberSaw (updated for 6.85)

You Need it to start be a chainsaw

You will start cutting

Do it in that Order

Cutting Every Thing with TimberSaw (updated for 6.85)

Hello My Name its Noba_37(Pedro Ez) and this is my first guide to play with one hero
I want share my playstyle with you and if you like this Guide Like it =3
This build aims a Tanker Hero and DPS attacks.
But lets talk some of

Timbersaw its one of the most op tanks because your 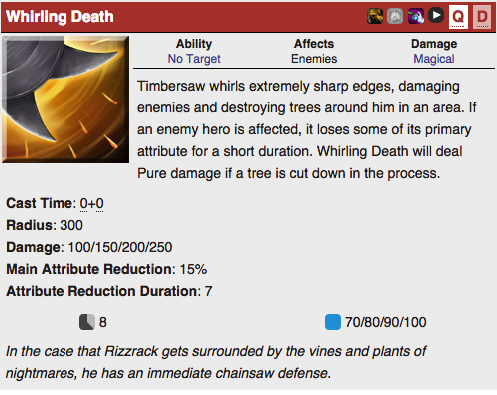 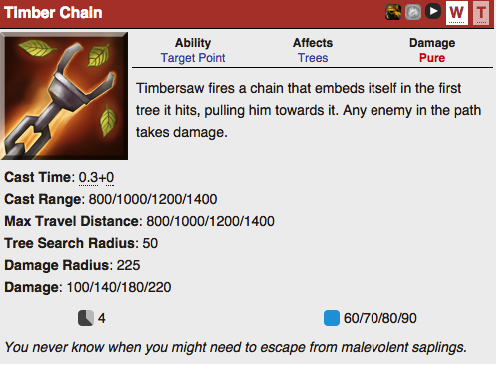 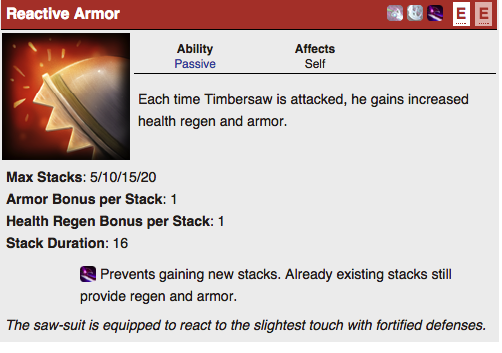 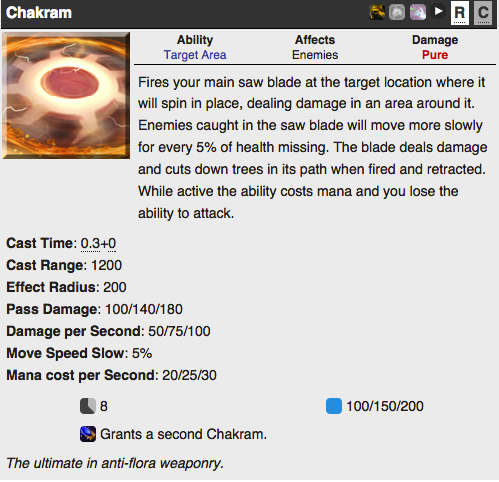 Pro:
No matter with mana
Big Armor
High DPS with 2 Chakram
Boots:Mana Boots (early game) help so much to fill your mana, travel boots (Late Game) good mobility and tp to base and to lanes

Cons:
Realy need a good farm
Need good precison to use his

Why i Choose These itens ?

Whirling Death and your

Bloodstone you need some mana recover

BloodStone :
It`s simple the best item for him because you get a lot of mana regen with charges and you get a lot of life/mana and if you die (impossible with this build if you know how to play) your friends get life your death time if you have 12 charges or more its like 0 seconds to revive.

BladeMail :
If there is a

Timbersaw because the time if you use your

Chakram you only can attack using skills so you don`t want a big cooldown and gives life/mana,life regen and mana regen

Aghanim`s Septer :
SAW EVERYTHING HAHAHAHAHAHHA ops sorry, with this item you can use two

Chakram in once time so think a

Dont Feed and you will win and you cannot die because you lost too much gold
But How don`t die -
First: Before 15:00 min of game be a safe game and when you get blood stone start ganking somo places like top or bot (if you`re at mid)
Second: Dont jump at towers to get kills, dont hear your team if them say: "go tank him die and we will get kills) remember you`re are a person and not slave, you want be a predator and not the bait or prey
Third: Think some things you can do to tank and not be killed because you`re a tank but you want to be killer too

If you are fighting with a

Storm Spirit (exemple) at mid, you know he is a magical damage Hero and you`re dying because you don`t have money to buy a cloak to protect yourself.
Try change lane or you call your team to make a gank Exemple:
1- You are 2/5/4 and storm is 6/3/7 dont jump on him to die tell a friend like

Windranger (Escape easy,stun and can kill you in some seconds like 6 or 7 with her ultimate) its hard you kill she with or melee attacks or with your First Skill or your Ultimate because she can divert your attack so you need do possible to don`t farm she(kill minions,push lane, kite she with your ultimate,DONT DIE) to get the victory at this lane because you cant kill she easy

Why i choose max First and Third Skill First ?

Whirling Death and some armor and life regen

Timber Chain and to you do damage with your

Timber Chain you need have a good precision and depends of trees to go to another area.
If you want you can give one skill point to Second Skill but i prefer not.

Rizzrack could still hear the screams in his mind. He worked, frantically turning wrenches, twisting screws, building and carving and forging. Sleep eluded him; he only built. Months had passed since he had shut himself in his uncle's workshop, and his deliverance was nearly complete. He rubbed his back as his eyes drifted shut, and saw a blanket of flowers floating on the placid waves of Augury Bay before exploding into a cloud of pollen that silenced lives as it seized the lungs. He woke with a choking start. For hours the rhythmic sound of a whetstone filled the shop as he sharpened a set of massive blades, his mind filled with images of strangling vines garroting neighbors, enwrapping homes. The flooding of Augury Bay had been nothing compared to the violent horrors the waters left to take root beyond the city walls. But the saw-suit would make him strong and safe he thought, allowing himself this sliver of hope before the full might of his fear crashed into his fading mind. Branches and blood. When the city fell, Rizzrack fled trees that walked, and fought, and killed. Trees had shattered the gates and swarmed into the city. Trees had crushed and thrashed and stomped the last that Augury Bay could muster in defense, and stalked the few fleeing refugees. In addled silence Rizzrack unspooled the thick chain from the suit's arm, his hands quaking as he inspected each link and ran a trembling finger along the claw attached at its end. The saw-suit was ready.

With his hand trembling he sparked the bladed machine to life. Terror drove him, terror of what awaited him and of what he would have to face to have any hope of calming his mind. As the saw-suit shuddered to life he knew he must face this fear, and he knew he wouldn't like it one bi