Dota player for 3 years
Dota 2 beta tester.
Here, I'll like to help everyone learn what I learned over the few years of playing Dota.
Tips such as the little things, last hitting, denying, pulling, warding all the way to switching treads from str to int during fights, to tower target shifting (cycling). I'd try to put it order from simple things to the advanced mechanics.
Please ask me for something you'll see for me to talk about and I'll try to keep it updated.
Thanks
-BoredomIsFun

PM me or just comment here :)
My years of experience can be put to good use!

Last hitting is simply killing an enemy unit (creeps or hero or tower).
Purpose:
- gain gold (usually ~50 for creeps)
- not allowing enemy to deny your exp and potential gold
- not pushing the lane, allowing you to lane more safely as the creeps will be closer to your tower 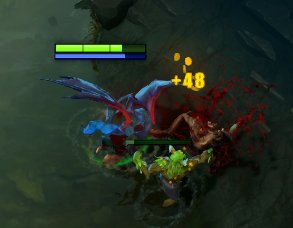 Denying is simply killing an ally unit (creep or HERO or tower).
Purpose:
- not allowing the enemy hero to gain gold and exp(CORRECTION: They gain EXP, just they would gain less[Extension: Melee heroes gain more exp from denies than range, as they have it harder during the lane phase), giving you level and item advantage
- not pushing the lane as the enemy creeps will extend into your lane, closer to your tower.


Note: Lich's 3rd skill Sacrifice (as well as Engima's conversion) deny xp COMPLETELY. This is why you'll usually see a Lich against a tri-lane or against the carry's lane! 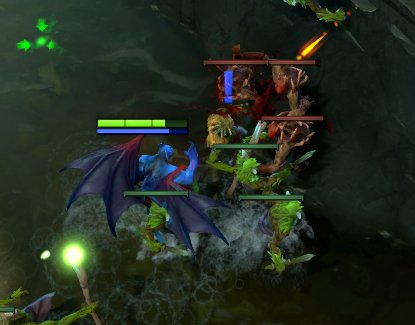 LAST HITTING and DENYING are important aspects of lane-ing, especially EARLY GAME though the it is still important in mid to late game as well, but early lane-ing is the an important deciding factor of how the game turns out.

TIP:
[*] Good practice makes perfect, play against the Dota 2 bots provided.
[*] Priority, last hitting>denying, though this changes if your support. 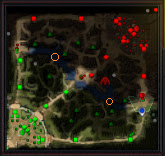 Double Damage- x2 attack damage (base damage + damage from attributes). Does not include damage only items (Divine Rapier, Battlefury)

Regeneration- 100 hp/s + 67 mana/s for 30 seconds. Will be removed either, by being full mana + hp or receives any type of damage (I sense a exception.)

TIPS: SPAM YOUR SPELLS WHEN YOU HAVE/KNOW YOUR ABLE TO GET A REGEN RUNE! Don't waste your opportunity to harass and farm faster without net mana costs!
Tinker should be happy!

Illusion- creates two illusions of the Hero for 75 seconds.


-Rune control is very, very important. A good rune will basically ensure a successful gank.
-'Rune whoring' is simply grabbing all the runes with your bottle, surviving the lane for longer!

TIP:
[*] Runes spawn every 2 mins. Take ADVANTAGE OF THIS KNOWLEDGE. For instance remember at what time the rune was grabbed, you will then be able to know if the rune has spawned yet.
[*] When ganking/bottling look at the time. Will the rune spawn in 5-10 seconds? Might be worth while to wait.

Blocking units is simply just standing in front of a walking unit (affects every unit in the game, heroes, creeps alike)

Creep Blocking
At the start of the game, when the creeps spawn try to place your hero infront of the group and constant stop/walk zig zag to slow the group down.

Purpose:
-Pull the creeps closer to your tower -> Safer farming :)
-Extremely important for mid. This decides whether you have the high ground or low ground, yes miss chance affects your farming. Notice how the enemy creeps at the end are now on your uphill!

Hero Blocking
Allies: I can not think of a situation where blocking your allies will benefit the TEAM. Don't do it!

Enemies: Blocking your enemies determines whether you get the kill or not in some cases! When ganking, try to keep your hero infront of them, pretending there creeps to be blocked. This will slow them down or force them to change paths.

ADVANCED: Illusion Rune -> Use illusions to block while you get the kill!

Pulling
Pulling is simple getting a creep wave to aid with early jungling.
Radiant: Usually at bottom lane, pull at x:15 or x:45
Dire: Usually at top lane, pull at x:10 or x:40
Advanced: There are methods to use a single wave to get multiple neutral spots.
Stacking
Stacking is simply, instead of a single groups of creeps at one spot we increase it to lets say 2 groups in a spot.
Purpose:
-Faster farming for AOE skills
-Faster farming for heroes with splash skills/battlefury. (Hi Anti Mage)
-More income in general

How?
[Background info] Neutrals spawn every minute, assuming there not present at the spawn (dead or simply being 'pulled away' from the spot). Thus if we pull a creep away from the spot at a certain time, another set of creeps spawn.
1. Around x:52 attack/agro the creeps and walk away from the spot. MAKE SURE YOU DO NOT PROVIDE VISION FOR THE CAMP.
2. After the x:00 min has passed, another set of creep should of spawned.
3. This can be done indefinitely.

EXTRA: ANCIENTS (the strongest neutrals before Roshan) are usually stacked as they provide the most income.
Stonewall008, has a great explanation on this mechanic. Skip to 1:28!
Note: Neutrals spawn at 0:30
Blocking camps
We will use how Line of Sight affects whether neutrals spawn or not, and use it against the enemy. Simply provide vision to a camp and they won't spawn!
2 Ways
1) Use your own hero
2) Use wards, both observer and sentry wards
^This is why you usually see wards being planted near/in camps, to simply block the camps from spawning!

Going back to base


If your going back and you still have some mana, use a spell on NEUTRALS/CREEPS, your gaining the mana back anyways! Never know when you won't be able to get farm.

TIP:
-I see too many people going back to base simply to purchase items. Don't. Get a courier and use the courier. Time taken to go back to base is time that could be used to farm (if your carry).

Bottle Spam in Base!

If you have a bottle, and waiting to be healed at base! USE YOUR BLOODY BOTTLE!
Don't worry in case you didn't know it automatically get refilled!

Purpose:
-Heal Faster -> Get in there!

Cheers to gentoo256 for letting me use it!

In some instances, you are able to deny heroes under 2 conditions:
1) If there is a poison/DoT(damage over time) debuff (Doom, Poison[Viper, Venomancer etc] but NOT MALEDICT].
2) If the ally hero is low enough.

Purpose:
- Does not give the enemy the kill, denying them of the bonus gold from killing them.

EXTRA:
Some heroes can kill themselves (Pudge's Rot) and can kill others (Tiny's toss damaging the unit toss [including allies]).

Quoted:
As a side note, marvel at the skill behind the death of Enchantress. Instead of dying, she amazingly managed to suicide instead. This was done by dominating Rexxar's Quilbeast immediately after it released a missile. The missile killed Enchantress, but since the damage came from a unit she owned, the kill became a suicide. Masterful!
-http://www.gosugamers.net/dota/features/2826

Sorry I have to use a Dota animation for the while, I'll try to find a replay where this also happens.
Note: Enchantress = Bambi
Top

Your able to access the secret shop from this position (In Roshan pit, closest spot to SS) 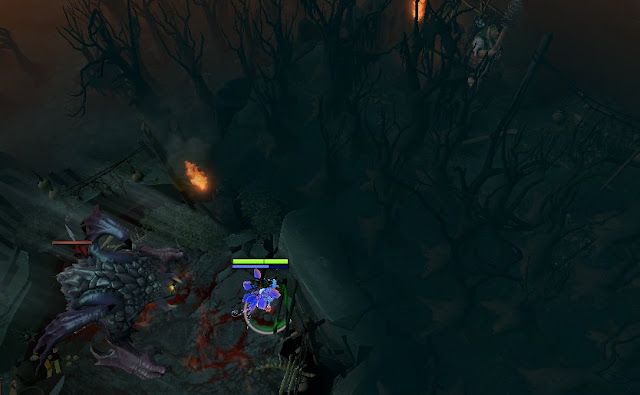 Purpose:
-Access secret shop relatively safer (for Radiant) than standing next to shopkeeper.
-Faster access (depending on your original position of course)

Thanks to: endqwerty for the tip!
You're able to access the secret shop from this position too! (Just above the stairs, near the runes) 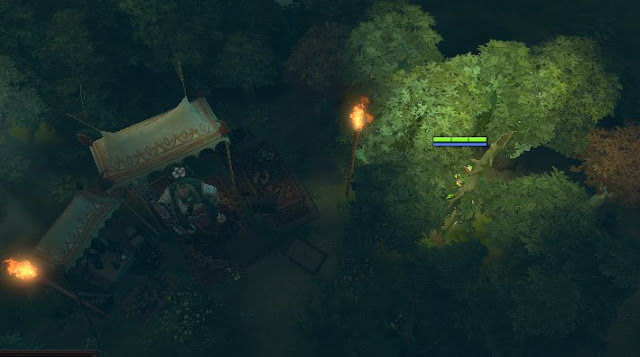 Purpose:
-Access secret shop relatively safer (for Dire) than standing next to shopkeeper.
-Faster access (depending your original position of course)

Drop Items to get more out of your consumables

When using consumables (Potion/Bottle) you should drop items that gave attributes bonuses. This in turn when using, will allow you to heal more (ratio wise) than before.

Common Sense Alert
Always be weary that items can be destroyed, or picked up (DAMN YOU STEALTH ASSASSIN) so ALWAYS take care when dropping items. Hint: Under tower!

TL;DR
Drop your items that gives stats when you want to heal/mana up with a consumable. Switch your treads stats around!

Tower cycling, making the tower attack another unit other than you. Watch one youtube! HD it!
Procedure:
1) Attack ally unit that's above the denying range.

"For laning: Clicking on an enemy hero will draw the creep aggro to you.
This may be a bad or good thing depending on what you do with it.
You can pull the creeps towards your carry or yourself."

I will continually add more and update the article until I announce I will not. Suggestions on what to add are appreciated.
Changelog:
20/12/11 Created and published the guide. Rough draft. Shall perfect in the later versions.
21/12/11 Added Videos and pictures! Cheers to the people letting me use the videos!