Stack For Most Damage

Stack for Most Damage 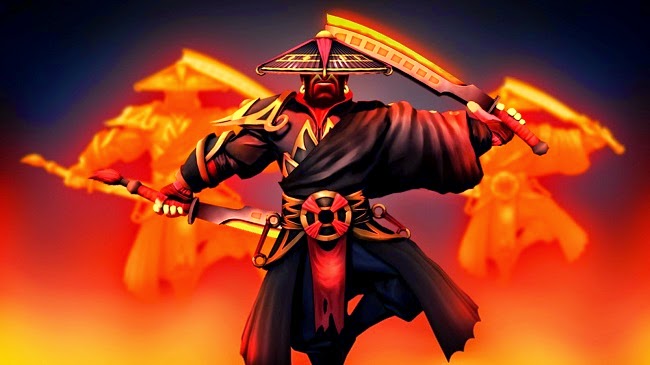 This guide is for experienced Dota 2 players who have a grasp on what ember is all about. This is not an introduction guide to the hero as his mechanics are something i will generally not be going over too often. Ember Spirit is an agility hero most known for playing carry. He fits in best as a core for a team, but can play as a 2nd for the team. Ember spirit is a Mid to late game carry all depending on how you build him. He is a overall excellent hero with the ability to affect the game flow throughout the entire game.

Ember Spirit unleashes two fiery bolas that wrap around nearby enemies, anchoring them in place and dealing damage.

Xin's harshest lessons often employed the use of red-hot chains.

Searing chains is overall an excellent skill that disables up to 2 units around you while dealing damage. Some aspects to remember is the units affects are RNG but the closer the unit is to you the better chance you have of affecting it. This means grind all up on that enemy hero to hit them in a creep wave (stand next to them).

Ember Spirit dashes around with blazing speed, attacking all enemies in the targeted area of effect, then returning to his start location. Deals bonus damage to heroes, and less damage to creeps.

The studied warrior must whip and weave through its enemies, burning each without pause.

Flying fists is ember spirits bread and butter skill. It allows him to dodge spells, phase shift, and carry into the late game. Some things to mention is like Pheonix's, Icarus Dive, you can activate spells during the animation. However, activating a spell or ability will not stop flying fists. One more important aspect is flying fists activates unique attack modifiers, or orb effects. This means you can lifesteal, slow with an eye of skadi, or even drain an oponents mana with a diffusal blade. Most if not all attack modifiers, such as; crit, bash, or even mini bash, can activate through flying fists.

Ember Spirit surrounds himself with a ring of fire that consumes incoming magic damage, leaving him unharmed. Flame Guard deals damage per second in an area around Ember Spirit while Flame Guard is active. If the shield is broken, the damage is also lost.

An enemy should never be allowed to approach without difficulty.

Flame Guard is an excellent skill all around, giving both offensive and defensive advantages. One thing many agility carries suffer from early game is magic nukes. This is one of the reasons supports rule the early game. This skill gives ember spirit the equivalent of pipe's damage block. The aura effect gives off the same amount of damage as a radiance at max. In perspective this one skill gives you the effects of a 6,000 cost item and a 3,625 cost item at level 7. Flame Guard is just a skill that is all around good from early to late game.

Ember Spirit generates Fire Remnant charges every 35 seconds, with a max of 3 charges. Releasing a charge sends a Fire Remnant that runs to the target location at 2.5x Ember Spirit's speed. Using Activate Fire Remnant, Ember Spirit can dash out to his Remnants, exploding them for area of effect damage. The targeted Remnant will be arrived at last.

By the spirit's power are Xin's teachings spread anew.

This skill is the main reason ember spirit is such a slippery foe to kill. It is basically a insta-teleport skill with 3 recharging uses. His the way the remnants recharge is similar to how earth spirits remnants or shadow demons ultimate with aghanims scepter works. The reason this skill is so good is because it is a global ability. Meaning you can drop a remnant in your lane, teleport into another lane for a gank, and after the gank is done instantly teleport back to your lane.

This section is dedicated to various tricks, and tactics to learn and keep in mind while playing ember spirit.

Long Range Disable: Things to note is searing chains is able to activate during flying fists. This means if you are in flying fists and use the ability while you are attacking it will disable an enemy unit in your aoe at the time of pressing it. This can be hard to land but becomes much easier with practice.

Escape Plan: With your ultimate as ember spirit you can place a remnant down at any point in time and immidiately teleport to it in a matter of seconds. If there is a missing call and you are worried about being a ganked, throw down a remnant under your tower, or in an area of safety. This allows you to escape most, if not every gank.

OH S#$T, F*$K IM BEING GANKED: If you can press fast enough and dont already have a remnant available while being ganked don't freak out and follow these steps as fast as you can click. 1, activate flame guard to block incoming damage. 2, throw down a remnant in the opposite direction of the enemies. 3, use flying fists right after the remnant is thrown allowing time for the remnant to travel. 4, spam activate fire remnant during flying fists to immidiately teleport to your remnant after the duration ends.

Refilling bottle: Drop a remnant in base before you tp back to lane. Then if you need to refill you bottle you could simply drop a remnant at your location, then activate fire remnant and instantly go to base and back refilling your bottle.

Before I go over all of the item choices in general, I will discuss the topic of stacking items on ember spirit. Many people not used to playing heroes with large aoe damage skilled based off right click damage don't understand the principle of stacking items. Certain heroes have abilities which allow them to deal large amounts of damage in an aoe by themselves or with certain items(cleave). Because of this factor stacking items which largely increase the damage output of these effects(cleave and crits) can increase the overall damage output more than other items would. Some heroes like this are Kunkka(tidebringer) and Juggernaut(Omnislash). There abilities damage are either increased or created by Battlefury and daedalus. Battlefury on Juggernaut, and Daedalus on Kunkka. Battlefury can create aoe damage because of its cleave passive which cause a precentage of the damage caused to be aoe from certain physical damage skills. Daedalus has the passive abaility of crits which gives a certain percent chance to largely amplify the given damage. The Special part about ember spirit is unlike both heroes he benefits largely from both items, therefore both are almost always purchased. Because attack modifier are activated through flying fists cleave and daedalus both activate. This allows ember spirit to deal large amounts of aoe using flying fists.The model below gives a bunch of math and explains the cleave factor in flying fists, and how to evade it. 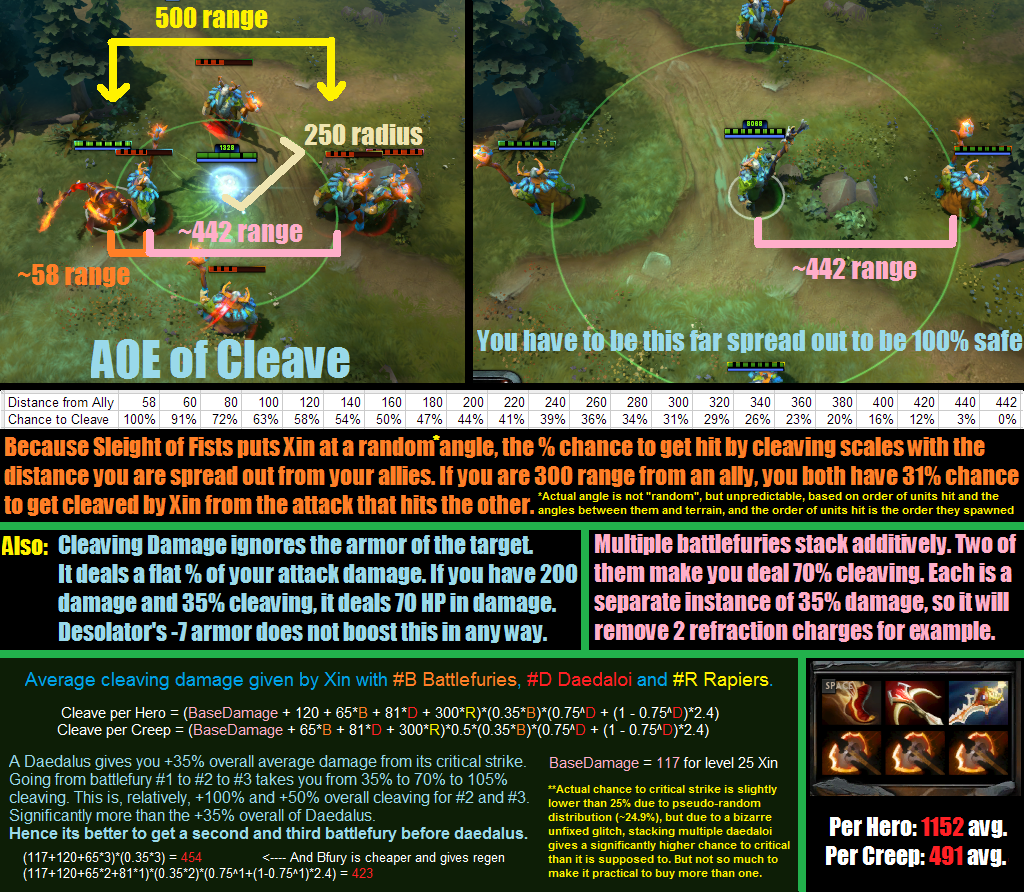 Now if you already knew about all of this and are wondering why i stated in the item build that stacking daedalus provides the most damage then ill explain here. The way cleave damage works is it is an aoe protruding from the direction of an attack. Therefore it is not in a complete circle of an opponent you attack, rather it is on a side of them. This causes cleave to have a percentage based chance of hitting an opponent. Daedalus on the other hand always applies more damage than battlefury crit or no crit. Furthermore is increases the chance of crits applying more crits with each target. Below i will prove my prevois statement of how stacking deadalus does more damage than stacking battlefurys.

I am going to set up a simple scenario of 4 targets, each in range of each other for cleave. For the examples sake lets say each targets damage is cleaved onto each other. Also for the examples sake none of the targets have any armor to make the math much simpler. One important thing to remember is stacking battlefurys increases the cleave damage, not the percent chance you have of cleaving onto an enemy from another enemy. Just as stacking deadalus increases the chance of landing a critical hit, because you can not activate 2 crits at the same time.

According to the examples the extra daedalus comes up with 200 more damage than the battlefury. But the reality is the chances of landing cleave from each of your attack on all of the enemies means they are within melee range of each other just about. So in reality the actual damage bonus affecting each unit is higher. Now the difference of stacking daedalus and battlefury is only 50 damage per unit minimum, the maximum difference is around((2,088-1,571=517)÷4~129) 129 damage PER UNIT, not even including the bonus 80 hero damage. In a 5 unit creep wave with 2 heroes(dual lane) its about 903 damage bonus, not including bonus hero damage.

Friends: Any hero that can enhance any of ember spirits abilities or fix any of his problems are considered a good ally. One major problem is mana difficulties.


Good Match-ups: Because of ember spirits skills he is good against a wide variety of heroes due to his diverse skill composition.

Overall ember spirit is an outstanding hero in pubs, and professional gameplay. On a more personal note this is my first guide if you haven't noticed already. That being said I will try to update this guide and keep tabs on it. If anyone reading this has questions or anything they would like to add to the guide feel free to comment down below and I will try to get back to all of you.

Crystarium's Ember Build
By on September 6, 2021