Lich is a very useful hero, he deals great damage from spells and strengthens armor. Has "infinity of mana" due to the ability to Sacrifice creeps for mana. His Chain Frost often changes the course of a teamfight to his own advantage. When playing Lich on Offlane you must remember that your main task is to survive and get as fast as possible the next levels.

- At the start of the game, use Sacrifice to range creep and block other creeps to delay their arrival, this will make it safer to fight closer to your tower.
- Use the Ward to block the camp or watch the incoming gank from jungle.
- Try to last hit and deny your own creeps.
- Use Sacrifice whenever possible, restore your mana and gain experience as a creep. (try to use melee creeps with full hp and especially for catapults).
- Use Frost Blast when your Sacrifice is on 2lvl. Try to use Frost Blast on the enemy carry forcing him to retreat.
- Keep away from enemies.
- Look at the clock. (in even minutes there are runes of rewards, you need to get a rune next to your tower)
- Use the chapel, don't return to the base.
- Play defensive until reaching 6lvl, when you get it, try to play more aggressively. (you should have a level advantage).
- When you are close to getting 6lvl ask for gank on your line.
- With 6 lvl pay attention to other lines, use tp and help in killing enemies.

- With the Blink Dagger keep the distance from the enemy, use it to escape / initiation / fight in team fight.
- While battling, use the Veil of Discord and then spell.
- Nuke important enemy fighters.
- Assist your allies and buildings with Frost Armor.
- Use Refresh Orb to use 2 times Chain Frost. 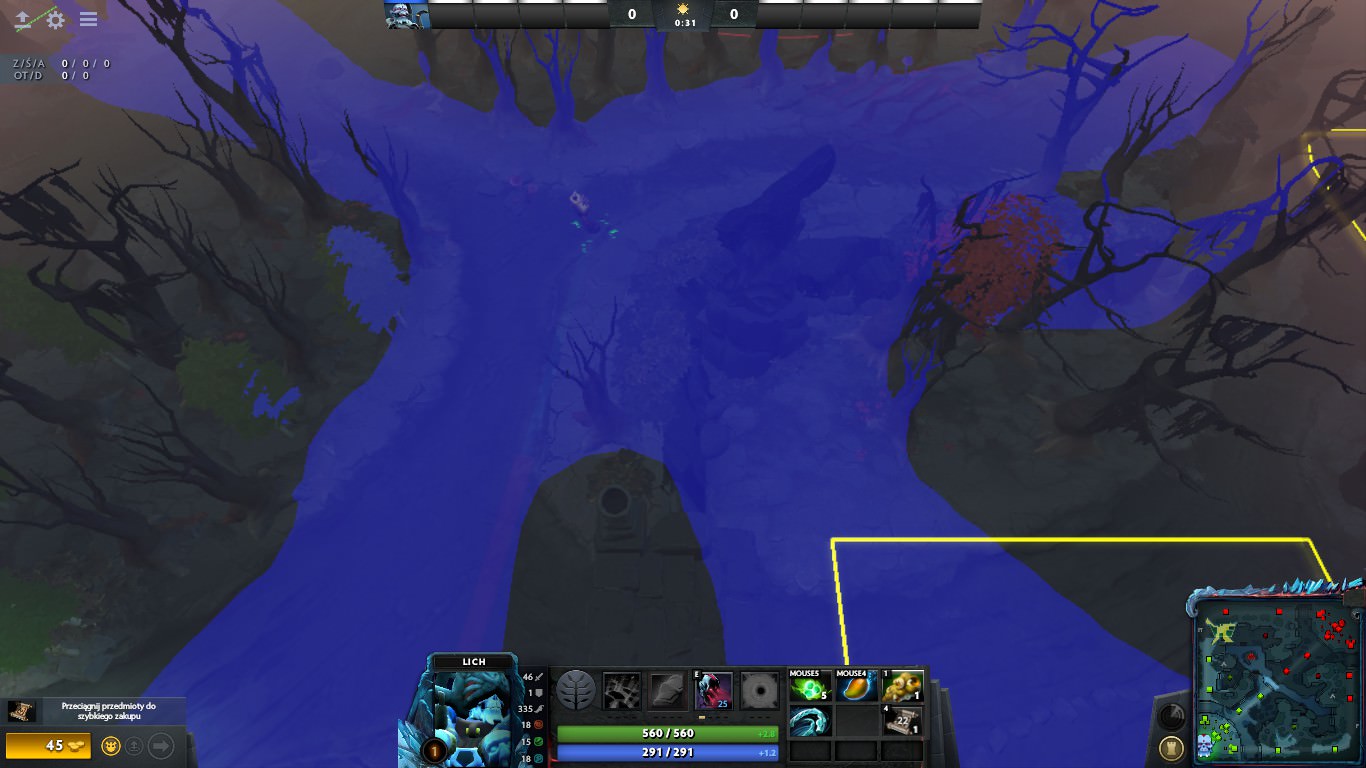 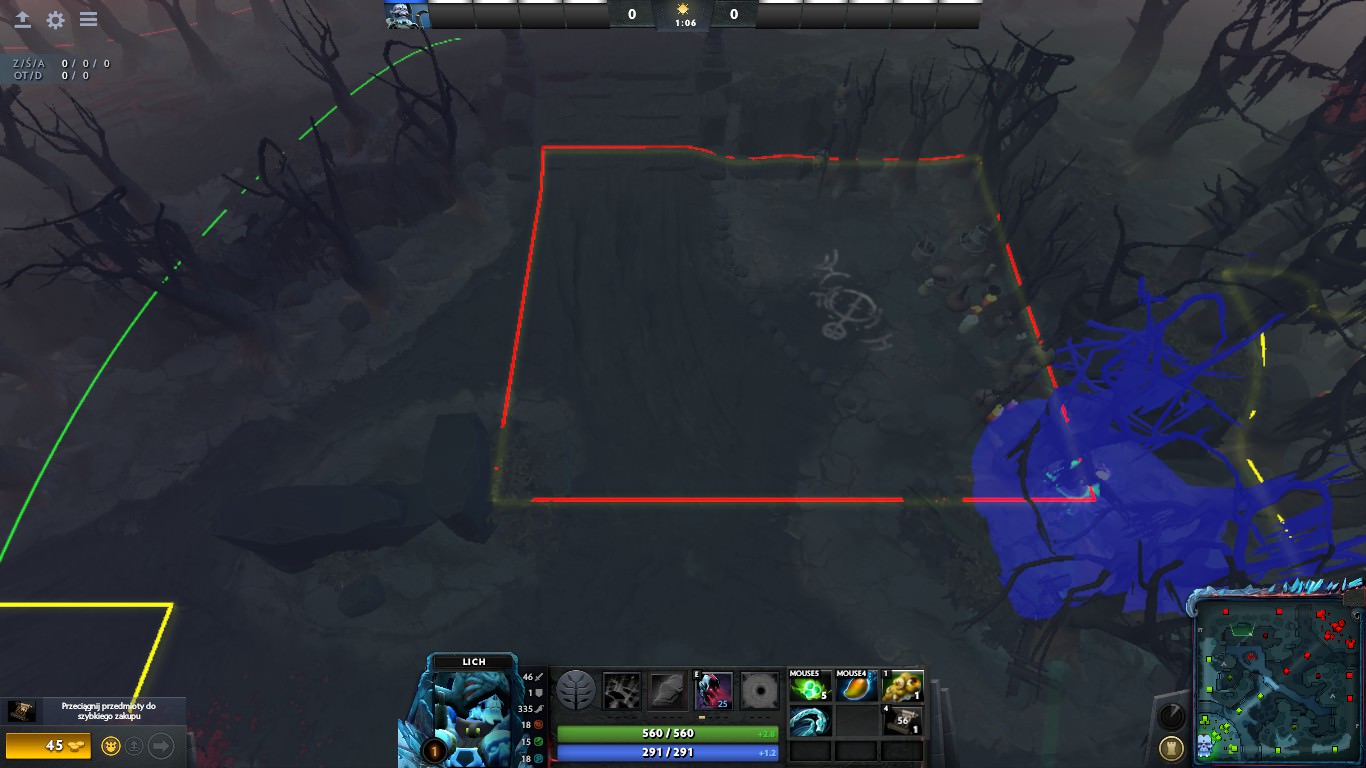 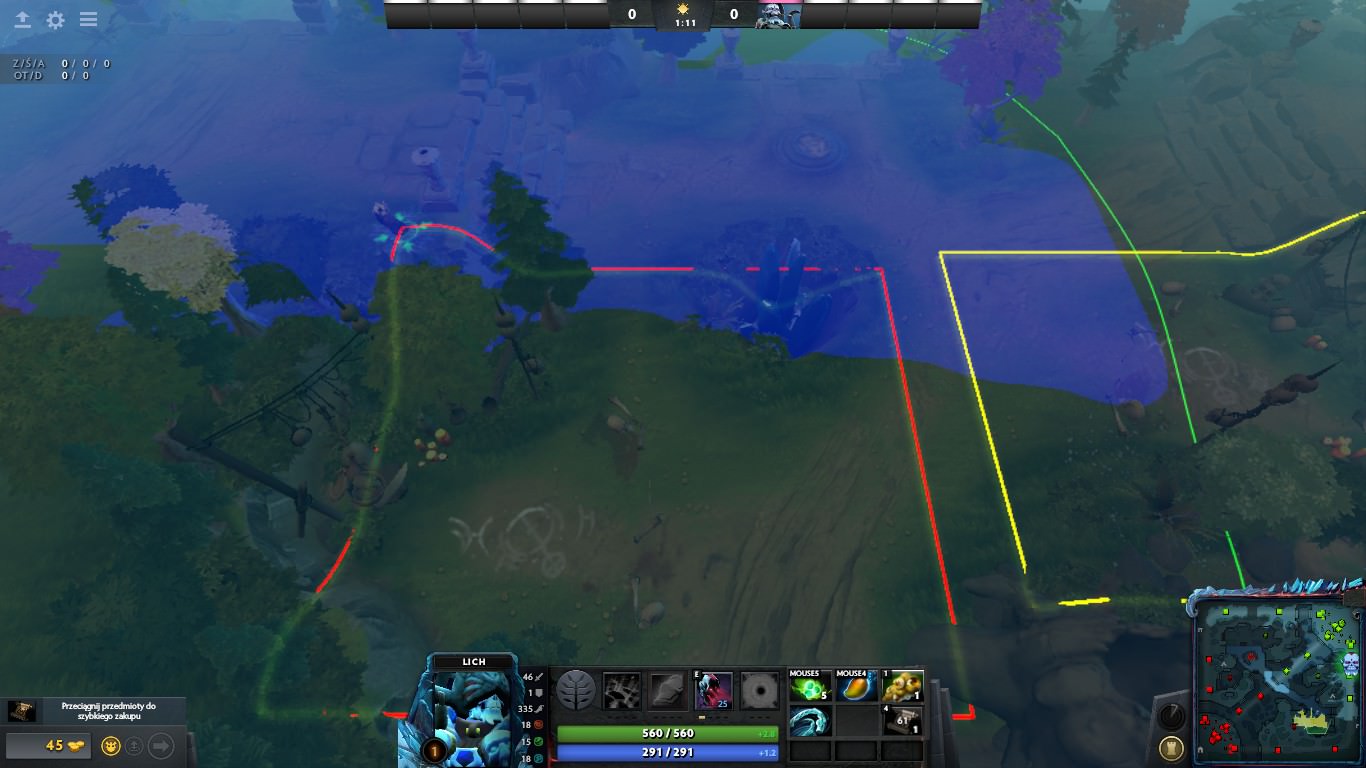 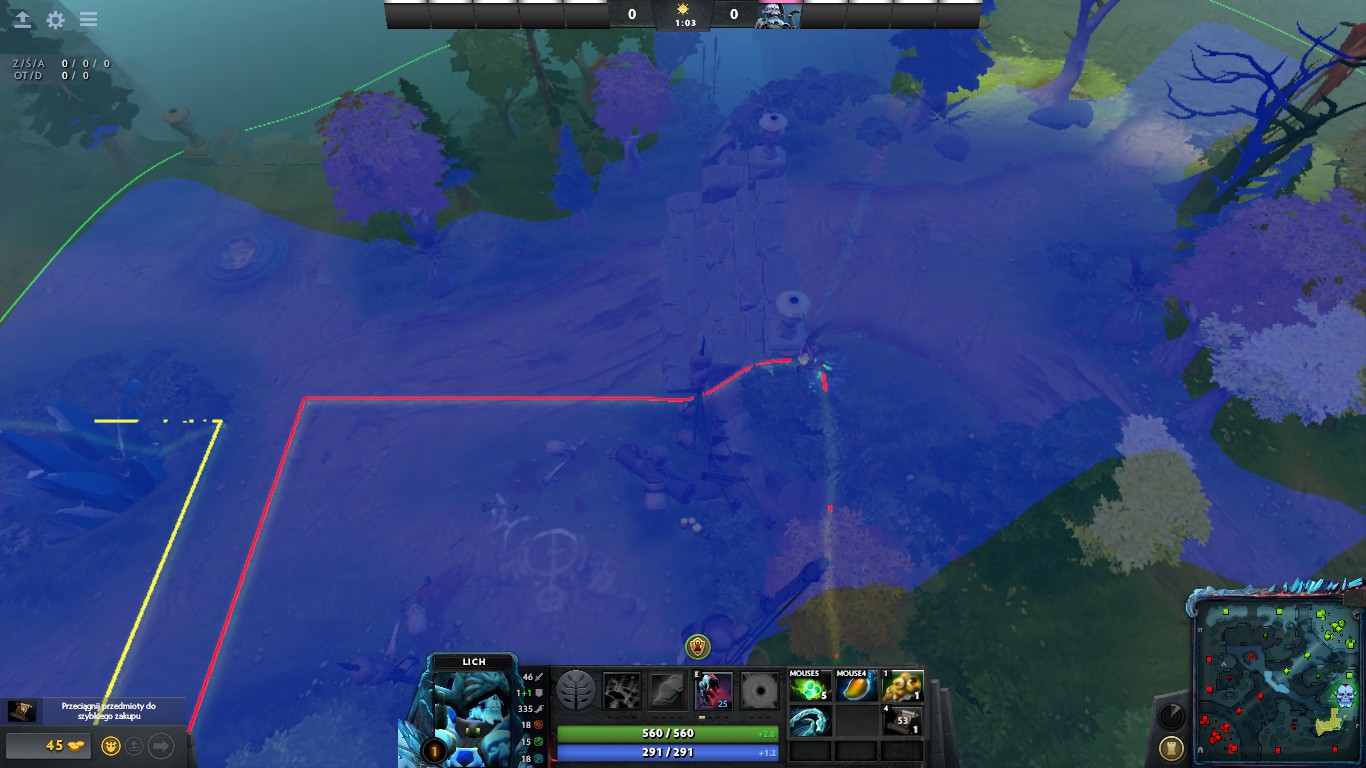 Blasts the target enemy unit with damaging frost, dealing area damage and slowing movement and attack rates for 4 seconds. The primary target takes the most damage.
(Try to use this skill often on enemy heroes or creep last hit alongside the enemy hero)
Frost Blast range:

Creates a shield around the target friendly unit, which adds armor and slows attacking units. Lasts 40 seconds.
(Try to make every ally have Ice Armor. Ice Armor also works on buildings, remember this)

Sacrifices a friendly creep and converts its current HP into mana for Lich. Grants XP to allies.
(Try to sacrifice melee creeps and catapults, they have more hp also catapults give more exp and gold to enemies)

Releases an orb of frost that bounces up to 10 times, slowing and damaging enemy units.
(Wait for a good moments, use a blink dagger, veil of discord and chain frost. Try to keep the enemies next to the enemy units so that the chain frost can freely rebound)

- +120 Gold/Min: will provide an additional 2g/s. Better to choose when offlane was too heavy and you have few items. (Note: instead of kaya make aether lens because frost blast has a small range)
- +175 Cast Range: will provide an extra range of spells. Better to choose when you won offlane or you won golds by killing enemies. (Definitely useful because the Frost Blast has only 600 range)

- Attacks Apply 30% MS/AS Slow: Again, it strengthens auto-attacks like the Eye of Skadi
- Ice Armor Provides +30 HP Regen: Strengthens the armor by regenerating HP. Can sometimes save someone's life. In my opinion it is better to choose it.
Top

- Tango: Allows you to stay long on the line until you get Tranquil Boots.
- Enchanted Mango: You will need in the first 10 minutes when you have low mana.
- Wind Lance: You need to get Tranquil Boots, it will help you block creeps at the start.
- Observer Ward: To block camp or detect enemy gank.

- Kaya: Will provide mana and boost spells.
- Refresher Orb: Removes CD from spells, you can use chain frost 2 times.
- Boots of Travel: It will increase movement speed and allow tp to allied creep / hero / building.

- Aether Lence: Will provide mana and mana regeneration and will increase the spells range. The alternative for Kaya when we choose +120 Gold/Min talent.
- Scythe of Vyse: Turns a target unit into a harmless critter for 3.5 seconds. Destroys illusions. Try to use against the important team fight hero.

- Town Portal Scroll: You should have to escape or help on other lines.
- Dust of Appearance: When no one else buys it against invisible units.
- Tome of Knowledge: Gives extra EXP.
Top

Thank you for reading!

I hope this guide will be of some use and will contribute to the win. Good luck & have fun!