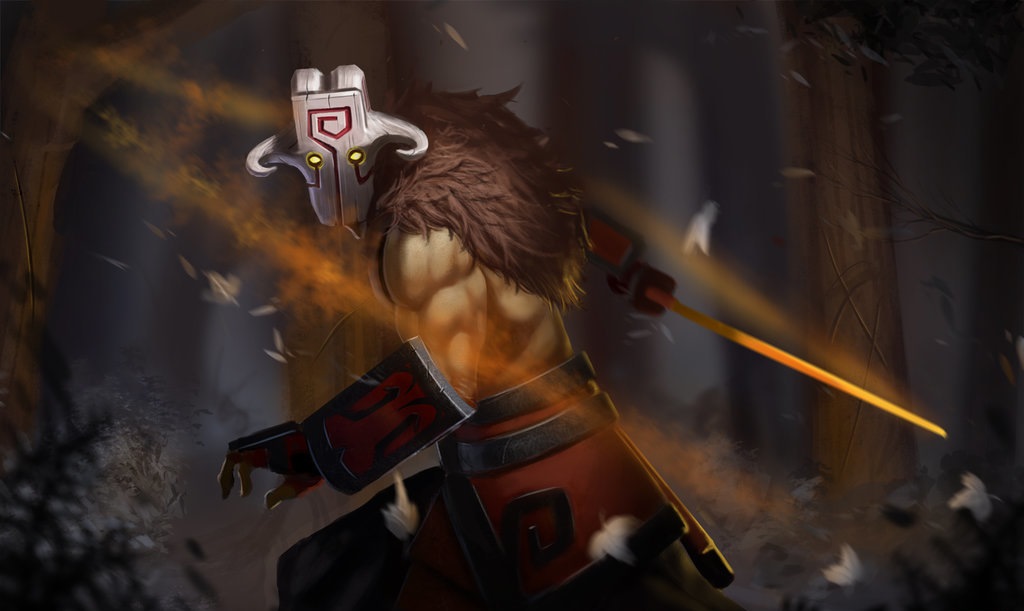 Juggernaut is a melee agility hero who is typically played as a mid-game carry. Usually played in an aggressive dual or trilane, his Bladefury is fantastic for early kills and allows him to snowball really hard! He also is really good in the lategame if he gets enough farm and items and his ultimate can potentially kill the entire team in one go!

As of 6.81 Juggernaut got a buff to his BAT. It might be only a .1 difference, but that difference can mean a lot in the mid-late game. His playstyle is generally the same, but the rush BF build is now going to be a bit more viable now since his late-game damage output will be significantly larger. I also see many people go for an Aghanim's Scepter rush which is a rather subpar build and leaves you wanting for damage output when you're ultimate's down.

Juggernaut has some powerful skills, but he also has some glaring weaknesses.

Juggernaut has some issues, but most of them can be solved with your item choices!
Top

Juggernaut's skillset benefits him a lot in the midgame, but less so in the super-late game.

This is what makes Juggernaut so good at setting up kills in the early game. Doing a total of 700 damage in it's duration, combined with a good disable or slow, most heroes will just outright melt to the magic damage this skill outputs. You can't damage heroes or creeps through the ability, but you can damage structures. You can proc bashes and Mjollnir/Maelstrom, however.

Healing ward is a powerful spell in the mid and late game for keeping Juggernaut's HP up. If you run out of regen and are afraid of being ran out of lane, picking up a point in this early on is recommended.

A decent damage boost that saves you the cash of having to buy a Daedelus. Has a fairly high proc chance.

Juggernaut leaps towards the target enemy unit with a damaging attack, and then slashes other nearby enemy units, dealing between 175-250 damage per slash. The fewer units available to attack, the more damage those units will take; if a unit is alone, it will take all of the damage. Juggernaut becomes invulnerable while Omnislashing and mini-stuns the first target.
Range: 450
Jump Radius: 425
Number Of Attacks: 3/6/9
Damage Per Attack: 175-250
Cooldown 130/120/110 Mana 200/275/350

A powerful skill in the midgame, this allows Juggernaut to get guaranteed kills on solo targets and do massive amounts of physical damage to the entire enemy team. You can also attack in between slashes if your attack speed is high enough (a max of 1 auto attack per slash at 310 attack speed) so even though 175-250 physical damage doesn't scale extremely well into the superlate game, your right click damage will.
Top

Juggernaut's skillbuild should be generally the same against most lineups as his skillset does not offer much versatility. 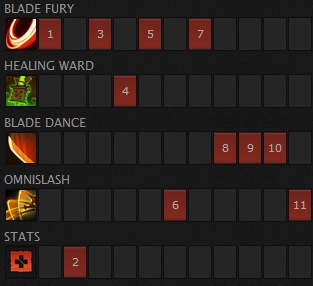 Blade Fury is taken first in case of a first blood gank. It allows you to avoid stuns and nukes and it's also good in case your team wants first blood. 99.99% of the time, this should be your first skill. Usually you take stats next but if you're getting ran out of lane, a point in healing ward can help regen you. After that, we aim to max your Blade Fury first. Taking at least one point in stats is needed because by the time you hit level 6, if you don't you won't have enough mana for the Blade Fury+Omnislash combo. After you max Blade Fury, max your Blade Dance as it will give you good right click damage in the mid-game. Omnislash is picked up whenever you can, and we max Healing Ward last.

The starting item build I have provided above is merely a list of items that would be good! You obviously can't afford all of this!

You should build your starting items according to how you predict your lanes will be. If you're expecting multiple ranged heroes, grabbing a stout shield wouldn't be a bad idea. If you're against really good harassers like Silencer and Keeper of the Light, extra tangoes help as well. If you're expecting free farm, a Quelling Blade is nice to ease the pain of Juggernaut's pitiful base damage. If you're playing aggressive and need more regen, grabbing a salve and clarities is nice. If up against spell spammers like Zeus, Bristleback, or Batrider, a Magic Stick is nice to have.

Most of your early game items should be stat and regen items as this is what Juggernaut needs the most in the mid-game.

Bracer is good for the cheap stats it gives AND it builds into a Drum of Endurance.

Aquila is a good pickup for the cheap damage and mana regen. If you're hard pressed for farm, or you picked up a Stout Shield, Poor Man's Shield is good to pick up as well.

Wand is a natural build up from a Magic Stick or Branches and allows you to stay in fights longer and to survive ganks.

Perseverance is a good pickup if going down the hard carry route. The mana regen is really nice on him and the HP regen allows you to stay in lane.

Orb of Venom is a great item for early chasing and harassing (if against melee opponents). The slow can also be applied while you're in Blade Fury, making it great for early kills.

Phase Boots should be gotten as soon as possible for early lane kills and for chasing. The bonus damage makes your Blade Dance hurt like a ***** as well.

Drums of Endurance give Juggernaut the stats he needs. He needs STR for HP and INT for mana. The movespeed also prevents him from being kited, a problem Juggernaut faces when his skills are on cooldown.

Misc. Damage Item. Grabbing a damage item is recommended at this point. A Desolator is more expensive but provides the most DPS out of all the choices. Your ultimate also benefits from the armor shred. Maelstrom helps will farming and can proc during your ultimate. It also builds into Mjollnir, a very powerful item on Juggernaut. For keeping enemies in their place, a Skull Basher gives you a little bit of damage and a little bit of HP.

Battlefury gives Juggernaut good damage, regen, and fantastic farming ability. It could be argued that Maelstrom is stronger than Battlefury in Juggernaut, but I feel like he needs the regen more early on than attack speed.

Manta Style increases your damage, gives you stats, and gives you illusions. Juggernaut's base damage isn't amazing, but his illusions can use his critical strike. Combined with Healing Ward, you have unstoppable illusions that crit people. Lovely isn't it?

Helm of the Dominator allows you to stack ancients, jungle indefinitely, and give you cheap damage. It also builds into a glass cannon's dream item: Satanic.

When deciding your luxury items, take a look at what you and your team needs. Do you need more damage, more survivability, or more auras?

If you need more damage, going for Abyssal Blade gives you +100 damage and really good lockdown. Butterfly gives you more AGI, attack speed, and raw damage as well as some survivability from the evasion. Mjollnir gives you tons of attack speed and a powerful lightning strike that can proc during your ultimate. Monkey King Bar gives you True Strike which is good against evasion. It also gives you more raw DPS with the minibash, damage bonus, and attack speed bonus.

Satanic gives you 20 STR and the most massive lifesteal bonus in the game. You basically can regen back up to full HP in a single Omnislash.

Eye of Skadi gives you tons of HP, stats, mana, and a powerful slow for chasing. Combined with Basher, no hero can escape.

Vladimir's Offering is pretty powerful late in the game but is very poor early one. The armor aura is really nice for your team, however.

Assault Cuirass gives you tons of armor an attack speed to you AND your team.

It should go without saying that you will need a Black King Bar or Linken's Sphere in certain occasions. BKB for hard disables and AOE damage, Linken's Sphere for massive single target nukes, disables, and other spells.

Aghanim's Scepter gives you mana, HP, and upgrades your ultimate greatly. 3 extra jumps on a 70 second cooldown is a massive upgrade from your ultimate. It does leaves you wanting for late game damage in the hard carry roll. However that's nothing a Divine Rapier can't solve!

hEy guUUUUYYYSSS i can ONE SHOT ur entire TEEM!! *runs out of mana and proceeds to be bursted down*
Top

Juggernaut is a powerful hero who's fairly effective at all stages in the game. He has tons of DPS but can be killed easily once his skills are on cooldown. However, if played right, he can dominate a game single handedly.

A special thanks go to Icefrog for developing this awesome game, DOTAFire for hosting some really cool content, DotaBuff for developing a fantastic website for keeping statistics on the game, and for the Dota2 Wiki for gathering information on the mechanics of the game!

As always, good luck and have fun!