to start( you should know what to get, cmon.)

don get this. ever.

instead of orchid get...

you could also get...

Hi everyone, i am supernova and you are you! This is a guide on how i usually play ogre magi in PUB games, when playing this guide you should be killing everyone! not supporting like a ***** and hiding behind your carry! This is one of my favorite heroes and i have got a nice win-rate with him, please read and enjoy! 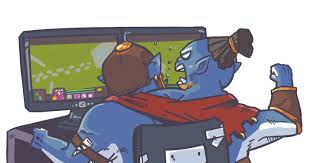 Don't forget to buy the courier!!!

Lore: The ordinary ogre is the creature for whom the phrase 'As dumb as a bag of rock hammers' was coined. In his natural state, an ogre is supremely incapable of doing or deciding anything. Clothed in dirt, he sometimes finds himself accidentally draped in animal skins after eating lanekill. Not an especially social creature, he is most often found affectionately consorting with the boulders or tree-stumps he has mistaken for kin (a factor that may explain the ogre's low rate of reproduction). However, once every generation or so, the ogre race is blessed with the birth of a two-headed Ogre Magi, who is immediately given the traditional name of Aggron Stonebreak, the name of the first and perhaps only wise ogre in their line's history. With two heads, Ogre Magi finds it possible to function at a level most other creatures manage with one. And while the Ogre Magi will win no debates (even with itself), it is graced with a divine quality known as Dumb Luck--a propensity for serendipitous strokes of fortune which have allowed the ogre race to flourish in spite of enemies, harsh weather, and an inability to feed itself. It's as if the Goddess of Luck, filled with pity for the sadly inept species, has taken Ogre Magi under her wing. And who could blame her? Poor things.

to start off you're gonna get some mana/regen and branches for your wand later and a soul ring, these starting items are'nt set in stone by the way. feel free to use your own personal combinations. after soul ring you want to get boots for your arcanes and a sages mask to help with ganks and start your orchid. mid game you want to have at least ONE oblivion staff completed, as well as having your arcanes then you should start building yo mek, i know supporting is fo ******* but people will yell at you if you dont get it. core is orchid for spell dmg of over 9000, drums give good stats, make your pushing even better and support yo usless team mates, . jeez. Late game, to avoid dropping off you should grab a scepter and REFRESHER ORB, fireblast,refined,ignite,refresh,fireblast,refined,ignite= m-m-m-m-mega kill! for luxury just buy some game breaking **** and hope for the best. 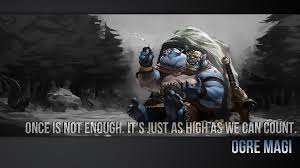 This is your primary ganking tool, use it finish a dude off, start a fight or disable someone important. when you get multicast this has chance to be cast multiple times on a single target. ouch indeed.

\This is a very useful spell, it has good dmg and more importantly a good slow that STACKS with orb of venom so if you're in a funky mood you can get an orb for great slow. multicast gives it an AOE which makes it a great pushing ability or crowd control.

BLOODLUST
Ability Affects
Auto-cast Allies
Incites a frenzy in a friendly unit, increasing its movement speed and attack speed.
Range: 600
Duration: 30
Bonus Attack Speed: 20/30/40/50
Bonus Movement Speed: 10%/12%/14%/16%
Cooldown 20 Mana 75
Blocked by Magic Immunity. Blocks effect if targeted on magic immune allies. Immune allies can still benefit from multicast bloodlusts.
'Runnings not as fun as hitting¦ Not one bit fun.'
This is far more effective late game when your mulitcast is at a sufficient lvl to push lanes like crazy. the best thing is you can bloodlust siege creeps, which makes taking down towers easy as pie. using this on yourself is fine as ogre has great dmg and health but it should really be for your allies or yourself or yo creeps.

MULTICAST
Ability Affects
Passive Self
Enables the Ogre Magi to rapidly cast his spells, giving them greater potency. Gives a chance to cast a spell multiple times in one cast. Increases Fireblast's mana cost and decreases its cooldown, increases cast range and adds an area of effect to Ignite and reduces Bloodlust's cooldown and gives it a chance to cast on random allies around Ogre Magi.
Chance to cast at least twice: 25%/40%/50%
Chance to cast at least three times: 0%/20%/25%
Chance to cast four times: 0%/0%/12.5%
Fireblast cooldown reduction: 2/4/6
Ignite increased cast range: 150/300/450
Ignite radius: 150/300/450
Bloodlust cooldown reduction: 5/10/15
Bloodlust radius: 575
Can be Improved by Aghanim's Scepter (* shows the improved values). Adds the Unrefined Fireblast ability.
Despite being largely incapacitated by his IQ, the Ogre Magi's success in battle is attributed to pure skill.
YOUR BEST SKILL. THIS SKILL CAUSES FIREBLAST TO PROC REPEATEDLY, LOWERS COOLDOWNS AND MANA COSTS AND IF SCEPTERED ADDS ANOTHER FIREBLAST. WHEN YOU KILL SOMEONE YOU MUST SAY IN CAPITAL LETTERS 'KABOOM NUB' TALKING ABOUT THIS ABILITY ALSO REQUIRES EXCESSIVE AMOUNTS OF CAPITAL LETTERS DUE TO ITS AWESOMENESS

-CAPITAL LETTERS
-IS AN OGRE
- 2 IS BETTER THAN ONE
- NUKES
- REFERENCES
-PUNS
- HIT PEOPLE WITH A BIG STICK
- WITH GOOD ITEMS CAN SCALE WELL
- PEOPLE THINK YOUT JUST A SQUISHY SUPPORT, YOUR A TANKY NUKE BEAST

i know what dota is, i know how to play ogre and if you hate this with all yo heart and soul i dont care. please leave constructive critisism ONLY. please try this before bashing it and point out any critical errors i might have made. thanks and see you later!
supahnovah btw, please leave a comment or upvote!