If you have no supports

Who is Legion Commander?

She's the girl that named herself 3rd place which 2nd and 1st place are gods who are good in wars and destroy their opponent without hesitation... but LC has a lot of hesitation like Lion's Hex, stun and finger and Bane's -dmg destroys her early game duels and nightmare duel. so LC does belong in 3rd place kinda sad.


Early game she quickly buys items that helps her duel and get 100+ damage fast to farm fast or to duel and win more if she sees physical damage attackers with good damage that will not kill her but enough to trigger *let them dare* with no escape or disables like Sniper, Drow Ranger, Lina (watch out for her stun and she hates laguna blade), Treant Protector (get sentry wards,bm and armor reduction to destroy the creepy stalker) or Dragon Knight (act fast) she can easily win duel and farm fast.


In Mid game the enemies will buy counter items for her because they hate her so much she op with +20% exp gain (your lvl 10 to them and after they saw you your lvl 20 farming for 10 mins *derp eyes* with complete items) so you better watch out they might have wards, orchid, hex, silence,linken sphere, passive break,euls, anti-lockdown or blademail caz they hate you so much and if they walk in yor jungle get ready for a duel and make sure you have map awareness.


In late game you must get 300 duel damage to push fast in just 5 seconds and win the game and also to fountain farm you must have items that has anti stun or hex (silver edge, bkb, linken sphere and speed items) to get RAMPAGE they will afk and rage quit in fountain because your so OP hero with almost 70% of winning and getting good stats

-She 1 man army
-She has heal that saves alies from eeky Pudge, Lifestealer, Riki (diffusal blade) and Crystal Maiden because its strong dispel but not too strong caz muscles aren't cute neither scary their hot
-She makes you rage quit cry more
-She has Overwhelming odds that acts like a Lion finger lvl 1 (icefrog nerfed its aoe range and dmg like what he did to shadow demon)
-She overwhelming odds a lot
-Blademail is Op item for her
-She stacks up to 10000 duel damage >:)
-She can make your life more complicated like Meepo last patch ago
-She loves killing solo laners and heroes who are alone
-She loves spamming that overwhelming odds

Cons
-She hates disables
-She hates lvl 6 duel with enemy high hp and durability
-She hates not winning duel
-She hates silence prevents her from dueling people
-She hates slow that passes through press the attack or after she use it its still there (drow ranger) even with overwhelming odds
-She hates troll warlord, Sven, Alchemist, or any heroes with stun
-She hates diffusal blade
-Not so tanky in early game againts physical attacks unless she's lvl 6 or 10 caz of nukers like Pudge

Assault Curr*** and +7 armor is a good item to block fountain 193 physical damage turns to 40 dmg per ticks and your lc passive heals you depending on your duel damage *you must have at least 150 avobe duel damage to bypass it) *recomended: 200*

Get starting items
-Stats
-Tangos or healing salves
-Scout Shield (so you creeps deal less damage from your 2 starting armor)
and DUEL ITEMS!

Threads is situational if you lack str/hp and damage

Shadow blade is a surprise noob item for LC like your enemies will scream like they saw a ghost after you duel them (goes well with bm and press the attack) and this item is an initiation item not escape item unless you want it too you can just escape using overwhelming odds and attack the enemy if you iniatiate and use blademail and watch the duel as an easy victory.

note: make sure you get 2700 gold (hide from bounty hunter if he tracks you) and buy it other wise if they saw your claymore they will know you have sb or they'll think your noob and you buy battle fury and laughs at you and goes to your jungle to kill you.

Blink dagger is optional if you have noob riki, bounty hunter, nyx assassin, weaver or other shadow blade user caz they buy sentry and gem caz they hate stalkers and surprise noob.

Pick Shadow Blade if there is a idiot apathetic ignorant enemy or just for a fast duel and to hunt more efficiently.

Get the following bucket list as LC to get +25

if your losing get 7+ str or the exp bonus then duel as fast as you can and get 30+ dmg if you lack of damage after getting the damage you need push the tower watch for your enemy if their missing they will hunt for you caz they hate you.


also tell your alies to help you duel if your losing

Fountain farm caz their salty not to give you rampage

Push and end early about 25 mins for fast and easy +25 mmr then repeat :O

PUSH! OMG PUSH! fine duel if you want you'll end up being stunned by Sven or Alchemist then give enemy dmg or if your team is ready to fight and winning or losing duel the easiest one who used up all their spells I mean the hero who didn't use up all his/her spells but his/her alies used it all up then duel him/her to make him/her useless and see this in chat *report (hero name)* or the one with low hp.

If enemy has too much disables wait for war and hide among the shadows and strike on the right opportunity... that means wait until they use all their skill on a tank like Sven, Bristleback or Pudge and duel the low hp hero or the one who still has a spell to kill or help their alies.

if LC is alone KILL HER BUY ITEMS THAT COUNTERS HER ESCAPE and attack her as fast as you can before she escape it doesn't matter if you got duel caz your alies will help you win the duel.

Rate me and everything else etc.

btw do I have to put everything to win?

(Seriously get it when I was Drow Ranger. Antimage, Sven and Slardar has evasion (slardar has Solar Crest) and everything is not well planned I was winning I have no MKB ended up losing with 30-0 because I don't want to die so I afk in fountain until I have advantage to kill (if slardar and the supports leave which they did and came back to help clean ended up with rampage and my team still not and mess up and die and i stay in fountain and their prepared and started wanted to kill me silenced and they went cripple panic and go sb before they initiate me inside.)

Blademail helps you win a duel faster in 2 seconds

Overwhelming Odds is a good pushing and harassing spell *where does those arrows came from?* up to 140 dmg (with creeps) lvl 1 with 2 heroes there (magic resistance is added) too 500 dmg run back to the fountain noob that's why you need to max this

Bloodstone is a good defensive item because of - respawn time

Silver Edge disables Troll Warlord's OP stun for a while caz he has .2 second attack speed even with bm he wins, Bristleback darn bristleback ouch no more bristle and Tidehunter's OP Kraken Shell

If alchemist gave you scepter and you cannot kill the enemy while dueling ended up getting killed by the enemy for example Sven with abyssal blade or skull basher and has daedalus and satanic - just get blademail and passive break if your soloing then duel him and show him and report alchemist for giving you scepter than giving it to someone else or maybe he's just rich that's why he gave that to you.

ask your supports to stun it and its a good anti-ks. :3 report lc for ks *if dies and it was sure duel win* report lc for fail ks and for noob russian indog pignoy mongoloid *insult stuff*

If Legion Commander is your enemy and you lost try playing Five Nights at Freddy: Sister Location she acts like one of the animatronics when she tries to duel you.

He/She just trashtalked to me and his/her normal skill offended me. 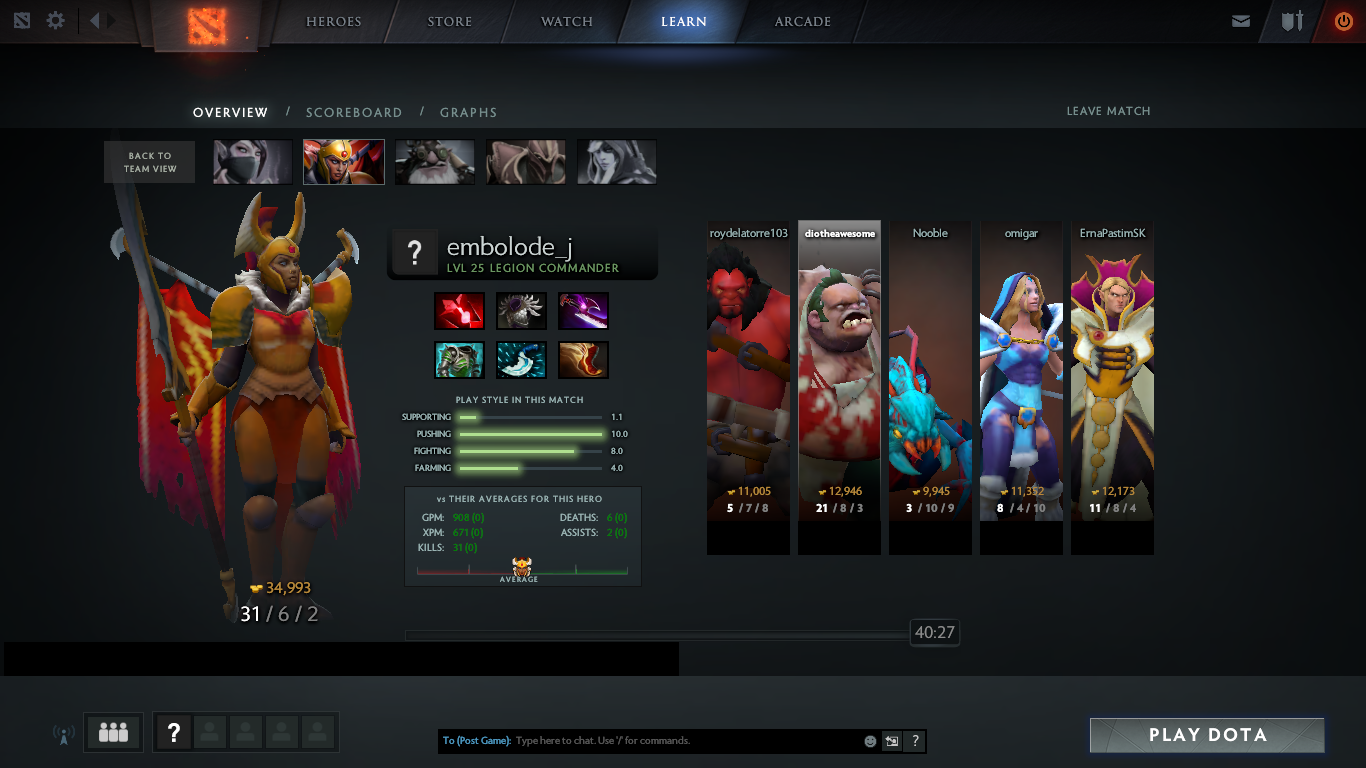