Welcome to my first guide on Timbersaw! This Guide has been completely built from trial and error from hours and hours of gameplay! Timbersaw is Melee-Durable-Escape-Nuker who excels in Ganking! With low cool downs on all his abilities Timbersaw is a force to reckon with! Timbersaw is item reliant due to the amount of mana he uses but is naturally tanky and has the potential to destroy team fights! Throughout the game Timbersaw is reliable to catch the runners and escape or engage in ganks with perfection! 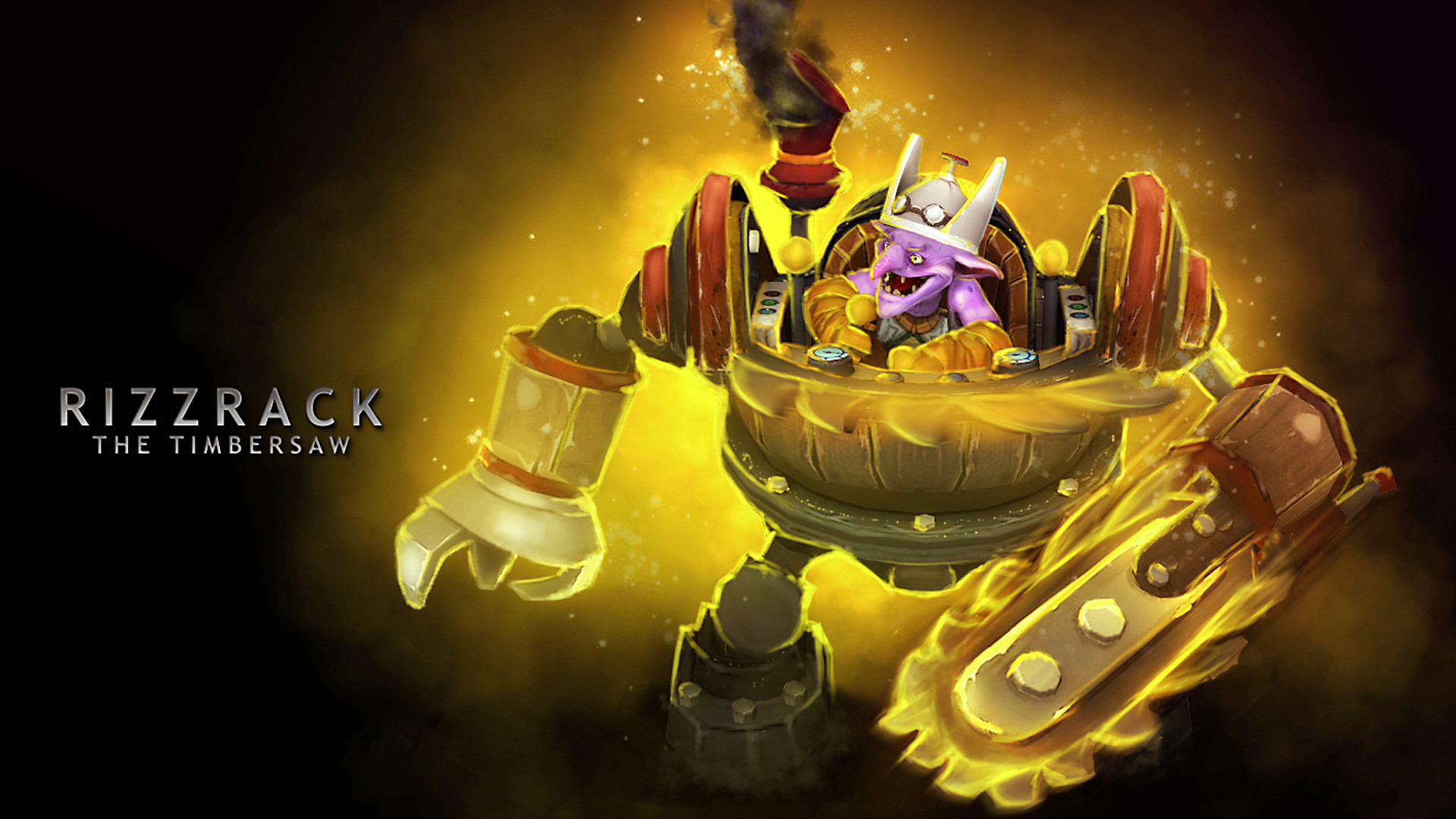 Rizzrack could still hear the screams in his mind. He worked, frantically turning wrenches, twisting screws, building and carving and forging. Sleep eluded him; he only built. Months had passed since he had shut himself in his uncle's workshop, and his deliverance was nearly complete. He rubbed his back as his eyes drifted shut, and saw a blanket of flowers floating on the placid waves of Augury Bay before exploding into a cloud of pollen that silenced lives as it seized the lungs. He woke with a choking start. For hours the rhythmic sound of a whetstone filled the shop as he sharpened a set of massive blades, his mind filled with images of strangling vines garroting neighbours, enwrapping homes. The flooding of Augury Bay had been nothing compared to the violent horrors the waters left to take root beyond the city walls. But the saw-suit would make him strong and safe he thought, allowing himself this sliver of hope before the full might of his fear crashed into his fading mind. Branches and bark and blood. When the city fell, Rizzrack fled trees that walked, and fought, and killed. Trees had shattered the gates and swarmed into the city. Trees had crushed and thrashed and stomped the last that Augury Bay could muster in defence, and stalked the few fleeing refugees. In addled silence Rizzrack unspooled the thick chain from the suit's arm, his hands quaking as he inspected each link and ran a trembling finger along the claw attached at its end. The saw-suit was ready.

With his hand trembling he sparked the bladed machine to life. Terror drove him, terror of what awaited him and of what he would have to face to have any hope of calming his mind. As the saw-suit shuddered to life he knew he must face this fear, and he knew he wouldn't like it one bit.

Staring Items : My starting items are basic items which are needed to survive the laning phase and build into higher level items later in the game.

Early Game: Rushing Arcane Boots And then into a Magic Wand will help with those early ganks.

Early - Mid Game: By now you will have around 1-4 kills and you will now be targeted in fights this I why I recommend grabbing a blade mail which will help you throughout the game.

Mid - Late Game: Vanguard for extra tankyness made from your stout shield.


Late Game: Euls Sceptre is now obtained due to its Mana gain and it special abilty which can save your ***!

Luxury/Substitutes : There are 2 boots that can be substituted; tranquil boots for extra lane survivability and cheapness; Boots Of Travel if you are fed and like to run around. Linkins Sphere can be rushed if you had an Early-Mid game advantage. Bloodstone can be taken instead of Euls and Vanguard if you are extremely fed and dislike Euls active. Another option is Heart over vanguard if you require more hp late game.

Timbersaw whirls extremely sharp edges, damaging enemies and destroying trees around him in an area. If an enemy hero is affected, it loses some of its primary attribute for a short duration. Whirling Death will deal Pure damage if a tree is cut down in the process.

Timbersaw fires a chain that embeds itself in the first tree it hits, pulling him towards it. Any enemy in the path takes damage.

Each time Timbersaw is attacked, he gains increased health regen and armor.

Fires your main saw blade at the target location, and once there the blade will spin, dealing damage in an area around it and slowing enemies. For each 5% of health missing, enemies caught in the saw blade move more slowly. The blade deals damage and cuts down trees in its path when fired and retracted. You lose the ability to attack and spend mana while the blade is out.

Returns the Chakram to Timbersaw.

Skilling your Q first as Timbersaw is a good idea as it adds extra burst damage to low level engagements and an early harassing skill. Getting your E at lv 2 is also compulsory as it gives you extra hp regeneration which really stacks ups in fights. Maxing your Q first gives you a lot more burst damage which can be used to destroy 2v2 or 5v5 fights as it can deal pure damage. W is maxed second as it gives Timbersaw more mobility and more combat and chasing power!
Top

How To Play Timbersaw

Timbersaw is a great hero to do major harassing with, being able to slip in and out of fights with his timber chain gives him an edge over many heroes. A hilarious trick I use when I am against a melee hero I throw out a chakram and then constantly timber chain over them. Timbersaw is great at getting to spots where other heroes cannot get to; this can help in escapes and chasing by being able to get over unusual terrain. Make sure not waste Timbersaws mana early game, be conservative and know the right time to engage. A bad engagement can lose a gameâ�¦

Cons:
Very High Mana Usage
W useless if no trees
Can be destroyed by mana drains

Great Team Mates:
Heroes like Chaos Knight or Witch Doctor who have great stuns are great allies with Timbersaw as he can place his ult down and lay waste over the enemy. Another great ally with Timbersaw is Natures Prophet- Trees = Pure Damage.

Bad Enemys:
Anyone who has a mana drain like Anti MageAntiMage or Keeper of The LightKeeperofthelight will lay waste to Timbersaw! Bloodseeker is a major problem as times as his ult will completely stuff you up as it wont allow you chase! AntiMage Keeperofthelight

Thanks for looking through my guide! Please Remember its my first guide so be ever so kind to leave some advice! :D

These are my first few games with Timbersaw testing out my new build!(Sorry for the **** photo but if you magnify in you can see my wins etc)