The Font of Avernus is the source of a family's strength, a crack in primal stones from which vapors of prophetic power have issued for generations. Each newborn of the cavernous House Avernus is bathed in the black mist, and by this baptism they are given an innate connection to the mystic energies of the land. They grow up believing themselves fierce protectors of their lineal traditions, the customs of the realm--but what they really are protecting is the Font itself. And the motives of the mist are unclear.

When the infant Abaddon was bathed in the Font, they say something went awry. In the child's eyes there flared a light of comprehension that startled all present and set the sacerdotes to whispering. He was raised with every expectation of following the path all scions of Avernus took--to train in war, that in times of need he might lead the family's army in defense of the ancestral lands. But Abaddon was always one apart. Where others trained with weapons, he bent himself to meditation in the presence of the mist. He drank deep from the vapors that welled from the Font, learning to blend his spirit with the potency that flowed from far beneath the House; he became a creature of the black mist. There was bitterness within the House Avernus--elders and young alike accusing him of neglecting his responsibilities. But all such accusations stopped when Abaddon rode into battle, and they saw how the powers of the mist had given him mastery over life and death beyond those of any lord the House had ever known. 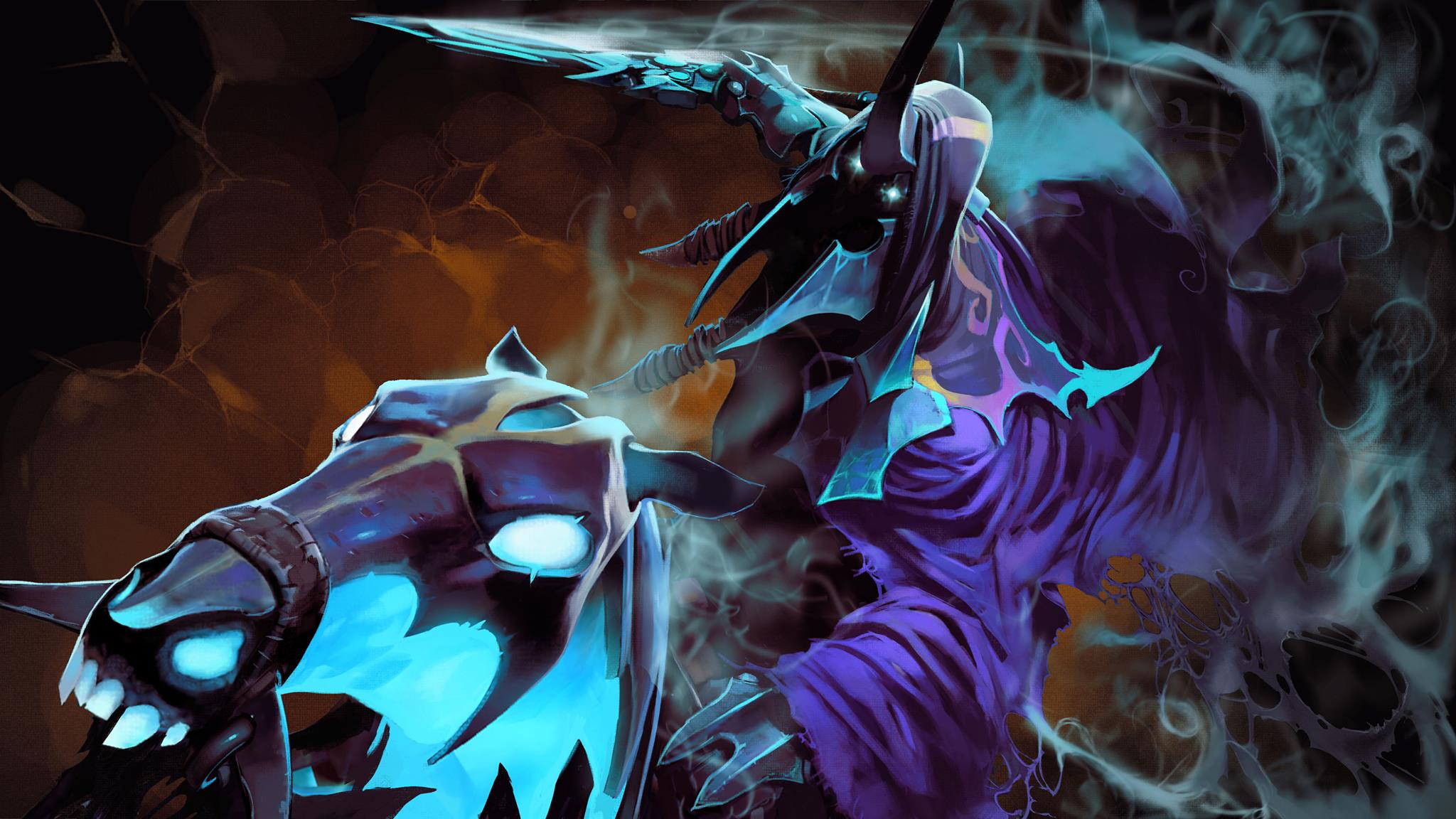 Abaddon is melee support, that can be also played as carry, he have nice stats (and damage) to be carry and with his ultimate and shield he can tank both enemies in teamfights and towers...

PROS
You can kill probably everybody 1v1
You can support your team tought you're carry
You does not need too much mana
After Phases + Madness Mask/Vlads + Basher you can buy wards for team (Go Semi-Support)
You can have kill with only LV2-4!
Hard to kill, have good escape mechanism.
Can skill Mist Coil to support his team!
Good stats.
Can deny himself with first ability.

CONS
If you deal him more thean 400 damage before his ult activates, he dies (Example : Dagon, Lion's Finger)
His ultimate IS counterable by axe's culling blade.

With circlet you can hace VERY early Bracer!

"Its not joke, when someone calls it GG Branch"

After this mask upgrade boots, this mask is needed is early game for more kills and in mid game to make Mask of Madness/Vlads

If you have lots of moneys in early game, but after every gank you have 1-200 HP you should buy this to regenerate after gank/s.

Nice item on lane, perfect vs nukers, and stats, if you have all 15 charges this regenerates INSTANTLY 225 Hp and Mana THIS ITEM SAVING LIFES!!!

This makes you moving EXTREMLY FAST becouse of boots + mask + curse of avernus = 522 speed!!! and also this gives you +100 Attack speed, that makes you very good in ganking!

Adds you (ike MoM) lifesteal but also nice aura for armor and mana and this item stacks with UAM (Unquine attack modifiers), so if you want go desolator/eye of skadi(Not Recommended) or ORB OF VENOM you should buy THIS!

Lots of Damage for ganks and 25% chance to stun when killing enemies, with mask of madness and boots this is EXTREMLY DEADLY!!!

110 more Damage and if someone trying to run or hero does not bashes and enemy using TP Scroll you can stun enemy for 2 seconds.

Ultimate Upgrade : Borrowed Time - Increases duration from 3/4/5 to 5/6/7
In lategame this can help you survive more or have nice underfountain kill! :D

Next very good item for Abbadon, makes you probably unkillable becouse of high Hp Regen and ulti and shield.

With This you can disarm enemy carry and you can kill him easily, also this adds you 45 damage and 25% Evasion, and Lesser Maim (Slow).

This item can give you more survivability and more attack speed, Survivability = 10 Armor and Attack Speed = 35 AS, and also makes your team more powerful /this item is good if you need push!/ becouce you have aura that adds 20 attack speed and 5 armor, that makes your team herder to kill and adds him enought Attack speed to push easier, also decreases enemy heroues armor = your ganks are more easier.

This should be bought if you dont have too many moneys becouse this adds you 7 Hp Regen, 9 Damage, 5 Armor and 15 Attack speed, also when is this activated you can hit with more power !!! bonus damage when activated is 65!

Good for initiating an gank, to catch running enemies and also not bad in escaping!

Next nice item that adds you lots of damage and makes enemies unable to run.

This makes better your pasiive maim, and adds perfect stats

Its sometimes good to buy, if you need to chase fast heroes (like luna) or if you want some stats.

This item makes your hits very very good but when you die you will lose this AND THAT CAN THROW A FULL GAME, so after rapier kill rosh and get:

(It's aegis of the Immortal), or you can buy this if you destroyed 2 set of enemy barracks :)

Summons dark energies around an ally unit, creating a shield that absorbs a set amount of damage before expiring. When the shield is destroyed it will burst and deal damage equal to the amount it could absorb to an area around it. Removes certain types of negative buffs and stuns on cast.
Range: 500
Radius: 675
Duration: 15
Absorbed Damage: 110/140/170/200
Cooldown: 12/10/8/6
Manacost: 100/105/110/115
Can be dispelled
Shield yourself and you can go to gank !

Abaddon strikes an enemy with chilling power on each attack, causing all units who attack the slowed enemy to gain increased movement speed, along with faster attack speed, for a limited time.
Duration of Slow: 2.5
Slow: 5%/10%/15%/20%
Duration of Bonuses: 4.5
Bonus Attack Speed: 10/20/30/40
Bonus Movement Speed: 15%
Your most needed carry ability, slow enemies, increases your speed, like maked for ganking! .... wait it's maked for ganking :|

When activated, most negative buffs will be removed and any damage you take will heal instead of damaging you. If the ability is not on cooldown, it will passively activate when your hitpoints drop below a certain threshold.
HP Treshold : 400 HP
Duration: 3/4/5 (5/6/7*)
Cooldown: 60/50/40
Manacost: 0
Axe's ultimate goes trought this and this wont activate while DOOMed!
Lol lina noob cant kill 10 hp abaddon -.- .
Wanna Basecamp?.
Finger of the Heal.
And more ...

Stuns are your friends!

Slows with Curse of Avernus can slow enemies on speed 100!

Tusk : Tusk can snowball you right to the enemy heroe's face and you can kill him, ice shards will help too or he can use "Kill Securing Punch"!

Slardar : This hero is AMAZING with abaddon becouse he can stun and decrease enemies hero armor!

AXE CAN KILL YOU IN YOUR ULTIMATE!

THIS IS THAT BEACH :

DOOM'S DOOM DO NOT ACTIVATE YOUR ULTIMATE!

THIS IS THAT BEACH :

AND ALSO COUNTERS ARE HEROES THAT CAN DEAL INSTANTLY MORE THAN 400 HP AND KILL YOU WITHOUT ACTIVATING YOUR ULTIMATE!

Who is my optional lane partner, what about Last Hits and Jungle?

Lane Partners...
You optional lane partner is support, disabler with is not too many level/items depended, i highly recommend Lina (She needs some golds but she can pull or last hit range creeps), she have nice stun abbility and does not need too many farm, also next good lane partner is Crystal Maiden with shes bonus Mana Regeneration you can spam you mana shield a lot and CM have PERFECT stun also is not too many XP/GP depended! Also Abaddon is good trilane hero ...!

Lane Last Hits...
Becouse you should go with not gold depended hero you should try to have as many last hits as is it posible.

6.60
- Lowered Mist Coil cooldown from 7 to 6.
- Abaddon now gets the Curse of Avernus buff on his first attack instead of on his second attack.
- Added Lord of Avernus to Aghanim's Scepter. Increased duration by 2 seconds.

6.81
- Aghanim's Scepter Borrowed time now redirects 35% of all damage dealt to allied heroes in 900 area to Abaddon when active.

LAST INFORMATIONS
Thanks you for reading, please send me FeedBack in comments, if you like this guide dont forget to vote! next update will be released in like 6 days (2.15.2014)

BYE AND ENJOY ONE OF MY FAVOURITEST HERO IN GAME :D