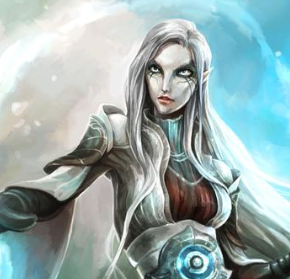 Ishmelga is one of the last descendants of Koryx, a sorceress clan tasked with the protection of an ancient art of magic that calls upon the three primeval elements: Quas, Wex, and Exort. She spent most of her past life travelling around the world finding students to share her craft and continue her Elder's legacy. However, this proved to be an insurmountable task as very few individuals yield the power to harness these ancient elements. Some wizards may be able to call upon a blazing storm but fire itself is just another manifestation of Exort. Others may conjure storms, or winds or blizzards but none can truly call forth the ancient elements and she would abandon these apprentices over the years and move on to the next.

Until one day, she met a boy named Carl. A thirteen year-old mutt from a small village. He was curious and observant child, too prideful for his own good. Ishmelga was drawn to this boy's charm and his penchant for getting his nose on all things he'd like to learn.

She took her in as her 112th apprentice to test if he has the skills. Her efforts bore fruit as the boy was able to connect with the primal elements with ease. While he was unable to call forth the element from within him, he was able to call upon their power tweaking these elemental reagents to create spells that even she could not conjure. She gave her the title Invoker

As the years went on, they grew apart. Carl, being proud of what he has become, went on his own journey to improve himself. He knew his abilities were far beyond that of his master and he knows he is one of if not the most powerful wizard in the world.

Ishmelga, on the other hand, continued her journey. She eventually found a new apprentice. An orphan girl who, like Carl, had the ability to call upon the primal elements. But fate seemed against her, the Invoker caught wind of this new apprentice and decided to strike down the one who would surpass him.

With a howling storm, he descended upon the temple where Ishmelga and her apprentice trained. She tried to protect the child but she did not expect how powerful he has become. It rained fire and brimstone and blood, all of the temple's denizens, including her apprentice, were slaughtered. She was barely able to escape with her life.

The last thing she remembered was crawling through the forest in a futile attempt to escape. One moment she was there and in another she found herself in a corridor, a pathway between two planes. Its guardian stood upon the precipice of the Void. He said, "come and guard my Hidden Temple. You will find the power you seek within its walls. A great conflict is coming, and you are needed to quell what's to come."

Ishmelga accepted the Void's power and guidance knowing she'll be able to exact her vengeance on her wayward apprentice. In return, she swore her servitude to the void in order to bring an end to the coming conflict.

-Cast range is 550.
-The primary target is unaffected by the explosion/damage.

-When cast, the orb travels from your current location towards your target in a straight line.
-The orb's collision radius is 200, when hitting a terrain or wall, it seeks the nearest enemy unit within 450 range and moves towards its direction(still in a straight line).
-If there are no enemies nearby, the orb will travel in random direction.
-The orb will continue to travel and bounce until its duration ends.
-There is no limit to the amount of times a single unit can be hit by the bolt but each subsequent hit will deal significantly reduced damage.

-When cast, this spell is replaced by Release and an indicator in status HUD appears to indicate the amount if time the spell is charging. Ishmelga can freely move while the spell charges
-When Released, fires the beam from your location forward up to 1000 units away.
-This ability will continue to charge for up to 6 seconds. When not Released, the mana cost is consumed and the spell goes into a shorter 3 second cooldown and nothing happens.
-The beam's width is 200 units and damages all enemies hit by it.
-Ishmelga is channeling while Release is active and can be interrupted.

-Cast range 650.
-The length of the wall is automatically generated upon casting, while the width closes after 0.5 seconds.
-The damage will occur only after the cage closes and the corridor starts to expand.
-Allied units can move freely in and out of the corridor like Kinetic Field where this ability was based off of. 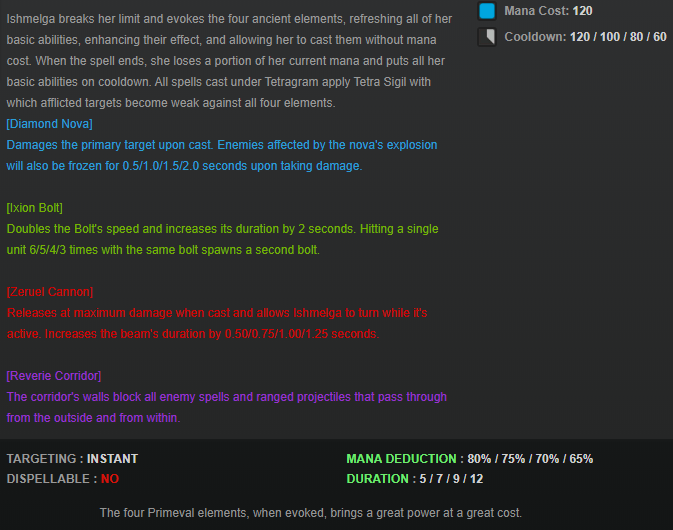 -Can be upgraded upon reaching level 8/12/16/20
-Tetragram is not affected by ANY cooldown reduction items and can't be refreshed.
-Each improved spell is limited to two casts per Tetragram.
-Tetra Sigils are removed when Tetragram ends.
-Secondary freeze does not trigger an explosion.
-The primary target takes the spell's damage first before it gets frozen.
-When the bolt hit requirement is met, a new one is generated from the unit's current location(does no damage the said unit) and travels toward the nearest enemy unit. If there are no enemies nearby, it will travel to a random direction.
-Automatically fires the cannon when cast, no charge time needed.
-Reverie Corridor only blocks ranged attack projectiles and spells that are projectile-based such as Chaos Meteor, Deafening Blast, Sacred Arrow, Storm Bolt etc.


Each of Ishmelga's abilities(with the exception of Reverie Corridor), apply a sigil on the units they affect. Sigils last 10 seconds and can be dispelled. Each elemental sigil is strong and weak against others.

After the damage is dealt, the previous Sigil is removed and is replaced by the corresponding Sigil of the spell used. Units can only be affected by the same type of Sigil once every 10 seconds. If the next sigil to be applied does not meet this requirement, the current sigil is purged.

If a certain evocation's element is stronger on a unit's current active sigil, it deals 30% more damage(before reductions) and will deal 30% less damage if the element is weak against the unit's sigil.

Void [Reverie Corridor] deals normal damage against all sigil types but its strong against neutral element(units without an active Sigil).

Cold [Diamond Nova] is strong against units with Pyre Sigil and weak against Static Sigil.

Static [Ixion Bolt] is strong against units with Cold Sigil and weak against Pyre Sigil.

Pyre [Zeruel Cannon] is strong against Static Sigil and weak against Cold Sigil.

Aghanim's scepter can be bought for Ishmelga.

Increases Elemental weakness' damage by 10% and reduces the damage penalty to weak elements by 10%. Additionally, it removes the 10 second restriction on Sigils and they now last indefinitely.

BloodArena | May 15, 2020 1:44pm
The way the skills work won't actually make the concept of order-based casting in this hero enjoyable when played in Dota2. Although the game really lacks such things, so this is a good try.
1
[-]

BloodArena | May 15, 2020 1:17pm
Reverie Corridor's skill description is unclear. But I guess it creates two parallel lines upon casting; the ends would connect after 0.5sec, forming a rectangle; then the rectangle expands, until it expires. Right?
Loading Comments...
Load More Comments